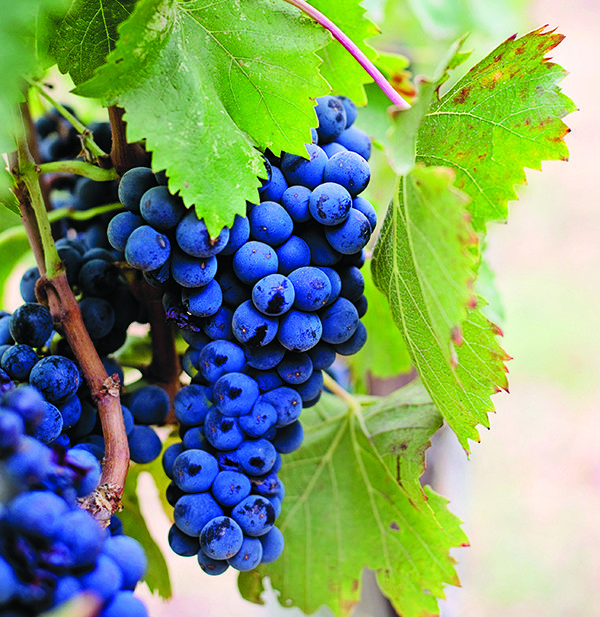 Jesuit missionary Jacques Marquette was two weeks shy of his 36th birthday while his exploration partner Louis Joliet was a 27-year-old philosophy student turned fur trader when they left St. Ignace, at the head of Lake Michigan, on May 17, 1673.

In two canoes paddled by five voyageurs, they followed the southern coast of what is now Michigan’s Upper Peninsula and made their way down the shore of Green Bay, arriving at the mouth of the Fox River about June 1.

The expedition would eventually travel down the Mississippi far enough to determine that the “Father of Waters” flowed into the Gulf of Mexico. Being among the first Europeans to travel through Wisconsin, it is more than fitting that a grape that helped open the way to a thriving viticulture in the state bears his name.

In the mid 1970s, the University of Minnesota began to develop grape hybrids that could weather northern winters. Peter Hamstad was the lead researcher in the project.

The Marquette is the result of an extensive cross-breeding program at the U of M. The first cross was with a northern variety that has a very hardy vine, but a lesser quality grape. Then the team crossed that with a French strain, which produced an outstanding wine but had a weak vine. The result was the perfect combination, and after many years of further testing, the Marquette was released in 2006.

Coming up with the name was far from easy, according to Hamstad.

“We gave it careful thought and consideration,” he said. “There are over 12,000 named grapes in the world, so a lot of good names are already taken and currently registered. The name Marquette was chosen because the name is well known in regional history.”

Some of the further testing took place at the University of Wisconsin-Madison Peninsular Research Station just a few miles out of Sturgeon Bay, where former Superintendent Richard Weidman was impressed with the Marquette’s qualities.

“It came in our first group of grapes in our federally funded project on wine grapes,” Weidman recalls. “It has performed very well; it yields a very high-quality wine and it competes well with the major wines.”

Weidman said there have been very cold winters that have been hard on the vines. Last winter’s so-called polar vortex killed quite a few vines, especially in low-lying areas. It bounces back and produces enough grapes for continuing the vine for next year.

“It’s probably one of the first top-quality grape varieties for wine production,” he said.

At Parallel 44 Winery and Vineyard, I sit with co-owner Steve Johnson just outside the Mediterranean-style winery on a sunny July morning overlooking the vineyard with farms, woodlands and a church steeple on the horizon. It takes only a little imagination to believe one is in Sonoma, Tuscany or the Loire Valley. Johnson and his wife, Maria, started Parallel 44 in the rolling farmland of rural Kewaunee County in 2005, and the Marquette grape is one of their staples.

“It’s an evolution of figuring how to plant, tend and vint it in the winery then how you eventually want to market it,” Johnson explained. “The more growers we can have producing Marquette, the quicker we can come up with a signature style that has an appeal to both casual wine drinkers and connoisseurs.”

Marquette wines are typically medium-bodied, with aromas of cherries, blackcurrants, and blackberries.

“The biggest thing I’ve learned is to let it be what it wants,” Johnson added. “It generally is more of a lighter red expression and shouldn’t be over-oaked and made in a style more like pinot noir than cabernet. The Marquette’s tannin structure along with high acidity makes the Marquette one of the best candidates for a drier red from Wisconsin.”

Parallel 44 also has been successful in producing a Marquette rosé. “Everyone’s always looking for that big, bold red but they realized sometimes in some seasons it’s better expressed as a rosé,” Johnson said.

Up the road a bit, the Marquette has found a home at the region’s oldest winery, von Stiehl Winery in Algoma, where Paul J. Koehler is the assistant winemaker. The winery has a large production facility across the street from its stone tasting house and retail center.

“Marquette has been a significant player,” Koehler said. “We have produced an estate-grown red from it in years with an extended growing season. Being within a mile of Lake Michigan, we tend to be a little cooler than the interior of Wisconsin. However, we have used it to produce a port-style red for which we received a double gold at the state fair’s professional competition. We also produce a Marquette rosé that has done really well in competition in California and in other competitions.”

Both the rosé and port-style are also sold at its Green Bay retail outlet, Captain’s Walk Winery in downtown Green Bay. Assistant Winery Manager Donna McVey said both varieties are among their top sellers.

“For me, Marquette grows well in this climate, and that’s why it is an estate wine for us,” she said. “Our rosé is sweeter than some that I have had,” she said. “Our Captain’s Mistress is a port style that has some barrel aging with it as well. There’s something unique about the Marquette grape that I can recognize the grape when I taste it.”

At the Harbor Ridge Winery near Egg Harbor, the Marquette has been a benefit in a number of ways. “It’s exciting to be able to produce fine wines with our very own grapes grown right on the property,” staff member Mary Collins said. “It connects us more closely with the whole process of winemaking, from the vine to the bottle.” The winery offers three varieties that have been popular sellers: “Crimes Against Vines,” a semi-sweet red; “Cracklin Rosé, a dry sparking rosé; and “Harbor,” a port-style dessert wine.

Further up the Peninsula in Fish Creek is Lautenbach’s Orchard Country Winery that shows off the versatility of the Marquette grape. The family-owned winery has it Death’s Door Red that is crafted from estate-grown Marquette grapes. One of the Door Peninsula’s most established wineries, Orchard Country has fortified this port-style red, producing a sweet and rich variety it promotes as a “perfect after dinner sipping wine.” Orchard Country introduced a blend of Marquette with Cabernet Sauvignon this summer to produce a drier red that the Lautenbachs describe as having plenty of character, “just like our classic red tractor.”

The Marquette is not only a superior grape for red wine, but it makes a gourmet-grade grape jelly. Jason Tlachac of Vita Della Terra in Forestville makes wine from his Marquette grapes, then turns them into the perfect topping for buttered toast.

“When it came on to the market, it was hard to get,” he said. “We started out with tissue grafts from the University of Minnesota, then got them going. The Marquette has phenomenal flavor and is one of our top sellers as a wine jelly. The Marquette kisses you back. It gives you that gentle flavor that says I’m always going to stay the same.”

It’s interesting to imagine what Fr. Marquette would think if he knew that nearly 400 years after he and Joliet made their way through the wilderness now known as Wisconsin, some of the rolling hills and former woodlands would be home to a fine grape and wine bearing his namesake. So, raise a glass of fine Wisconsin Marquette wine – Salute!

*This story comes to us from Edible Door.