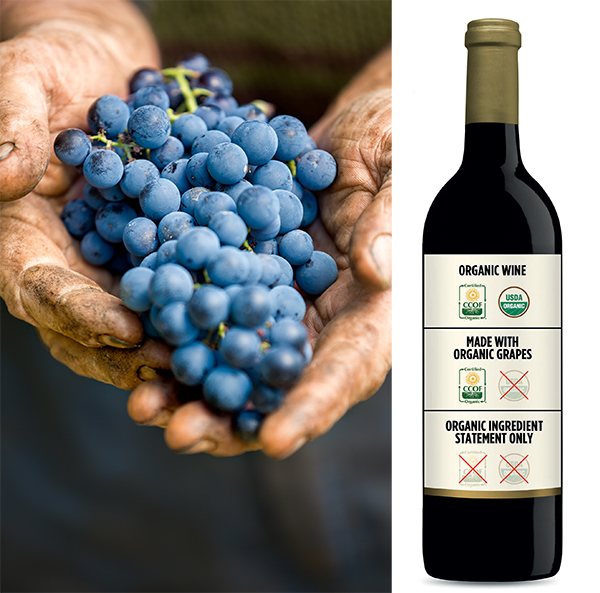 You are here: Home / Wine / Guide to Sustainable Wine

A quick look at terms used in the natural and sustainable wine world.

Organic wine is different from wine made with organic grapes—and that’s just the start of the sometimes legal, sometimes regulated, sometimes self-defined phrases on wine labels. Here, we’ve gathered what we think the most important ones are, complete with either their legal definition when they have one or our assessment of what their good faith meaning is and how it all relates to what you might be drinking.

In the United States, the label ‘Organic Wine’ means a wine was made with USDA National Organic Program (NOP) certified organic grapes and no added sulfites. Broadly speaking this affirms that no chemical herbicides or fungicides were used in the vineyard, the wine did not come into contact with genetically modified organisms, and the winemaker abstained from adding sulfur dioxide as a preservative to the finished wine. Trusted third-party accreditations like NOP are essential to setting and maintaining industry standards, still, many meticulous wineries, particularly smaller operations, refrain from the certification process because of the time and cost involved with maintaining the accreditation. Some also have questions about best practices, including the right to use additives such as acacia gum to soften a wine’s mouthfeel, oak chips for flavor, and pectolytic enzymes to enhanced color extraction under NOP’s National List of Allowed and Prohibited Substances.

Made with organic grapes

This category is for wineries that tend their vineyards in keeping with the core standards of the organic movement, abstaining from the use of chemical fertilizers, pesticides, fungicides, and herbicides, but are not certified by the USDA or any other third-party. Some may exceed USDA NOP standards – think arugula grown by an exacting farmer and sold at the greenmarket versus prewashed organic arugula sold in plastic containers at the supermarket – but you have to ask questions or do independent research to know.

Biodynamics, as laid out by the Austrian philosopher Dr. Rudolf Steiner in his seminal lecture, “The Spiritual Foundations for the Renewal of Agriculture” advocates for a holistic agricultural system that brings plants and animals together to support biological diversity. The practice was first introduced in the late nineteenth century as a reaction to the industrialization of farming, as the identification of nitrogen as essential to plant growth laid the groundwork for synthetic pesticides. Steiner believed that instead of resembling factories, farms should be modeled after living organisms; they should be holistic systems capable of creating and maintaining their own health and vitality. Biodynamic farms the world over are certified by DEMETER.

This category is for vintners who subscribe to the overriding philosophy of biodynamics, a vineyard is a wholistic organism in which all the elements are interconnected, and adopt its practices without being DEMETER certified. These could include, but are not limited to: avoiding the addition of commercial preparations to their wine, such as commercial yeasts; the spray application of teas made from yarrow, chamomile, stinging nettle, oak bark, or dandelion; the application of compost made from horn manure or horn silica; the use of livestock for weed control and increased biodiversity; or adherence to the Biodynamic calendar, which is divided into fruit, flower, root, and leaf days, based on the cycles of the moon.

All wines contain trace amounts of sulfur dioxide, SO2, as it is a byproduct of fermentation by yeast, in other words, winemaking. Any additional SO2 added to the wine acts as a preservative. Sulfur dioxide stabilizes a wine by preventing oxidation and eliminating bacteria with the potential to create spoilage. Making wine without adding a little SO2 before bottling is the viticulture equivalent of walking a tightrope. The winemaker has scant room for error. He or she must maintain extremely high standards of hygiene throughout the winemaking process to ensure their wine remains in good condition until it is served. Advocates of wines with no added sulfur believe that, when successful, the wines show remarkable depth, sense of place, and purity of fruit.

Sulfur dioxide is measured in parts per million (ppm). Wines in the category ‘Made with Organic Grapes’ are permitted up to 100 ppm SO2, while conventional wines are permitted up to 350 ppm SO2. Any wine with less than 100 ppm would be considered a low sulfur wine. A less technical way to look at this is, low sulfur wines reflect a choice on the part of the winemaker to add a minimal amount of SO2 before bottling to preserve the wine’s freshness and stability.

To achieve maximum clarity, remove byproducts of fermentation, and increase stability, wines are often filtered or fined. Fining agents are like ushers that attach themselves to leftover particles floating in the wine and hasten their removal. Most traditional fining agents would not be welcome in a vegan diet. They include egg whites, milk protein, gelatin, and fish bladders. However, there are effective vegan options winemakers could choose, such as bentonite and carbon. These options are increasingly popular in the EU, Australia, New Zealand, and Canada, where the presence of an animal-based fining agent must be called out as a potential allergen on the label.

An unfiltered wine eschews the speed and convenience of fining for old-fashioned patience. After fermentation, the wine is allowed to rest in the cask or tank. With time and good conditions, gravity slowly settles the residual yeast, pectin, proteins, tannins, and other particles suspended in the wine, to the bottom of the container where they become sediment. Clear wine is siphoned off from the top of the container leaving the sediment behind.

To be truly carbon neutral, beyond offsetting carbon emissions from the operation of a winery, vintners must also offset the carbon dioxide released into the atmosphere as a byproduct of fermentation. This could be accomplished through renewable energy practices, eco-friendly packaging, planting trees, or setting aside vineyard land as a nature preserve or biodiversity zone.

For wines in this category, fermentation is carried out by yeasts naturally at hand in the grape must, either having come from the grape skins or the ambient atmosphere of the winery. These ‘wild ferments’ tend to be slower, gentler, less linear, and less predictable than fermentation with commercial yeast strains, in part because different types of yeast are active at different times during the fermentation. As a result, the wines tend to be more aromatic and complex with a fuller more nuanced expression in the mouth.

The advantages of a hand harvest include more exacting fruit selection, gentler handling of the grapes and vines, and less impact on the soil, which heavy machinery can compact.

The Natural Resources Defense Council defines renewable energy, or clean energy, as energy that comes from natural sources or processes that are constantly replenished. They offer examples of sunlight or wind, which keep shining and blowing even if their availability depends on time and weather.