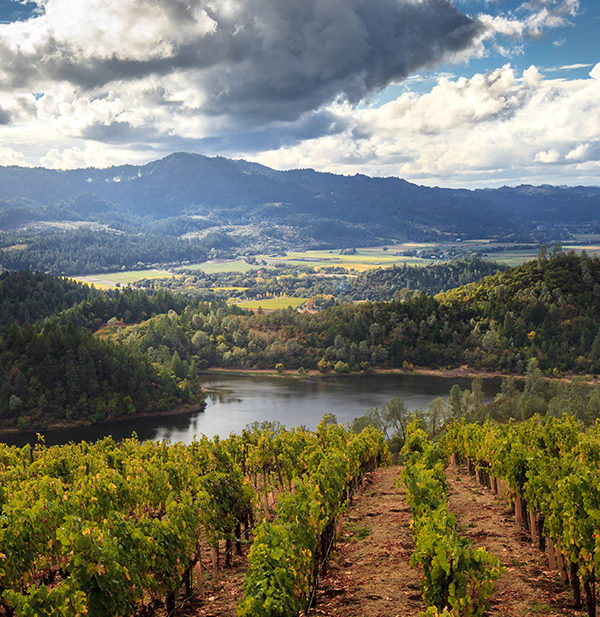 You are here: Home / Wine / A Tale of Two Aquifers

From east to west, you need water to make wine.

At first glance, Napa Valley and the North Fork of Long Island could not be more different. Napa is warm, dry, and Mediterranean—prone to droughts and wildfires, the North Fork is bright, cool, and Maritime with wet springs and a hurricane season that overlaps with the harvest. Napa’s winemaking tradition dates back approximately 150 years, and though it was twice disrupted, first by phylloxera in the 1870s and fifty years later by Prohibition, it remains a benchmark for American winemaking. The first vineyards on the North Fork were planted in 1973 and are being watched carefully as they fulfill their promise. What the two regions share, beyond being situated a stone’s throw from major metropolises, is a core group of winemakers with a profound understanding that the health of their vineyards is interconnected with a complex system of rivers, streams, oceans, and aquifers. In each region, these forward-thinking vintners banded together to find and implement solutions tailored to the specific needs of their local ecosystem.

Both ground and sea matter on an island

“For us, sustainability has to do with water,” says Richard Olsen-Harbich the winemaker at Bedell Cellars and a founding member of Long Island Sustainable Winegrowing, referring to both groundwater and the surrounding waters of the Peconic Bay and Long Island Sound.

The health of the groundwater is always in the foreground for local winemakers because there is only one aquifer on the entire North Fork, stretching from the town of Riverhead out to Orient Point, and it’s used for agriculture and for drinking water. Through the third-party certification program Long Island Sustainable Winegrowing, local vintners have carved two primary paths for protecting the water source.

The first is conservation. “There’s definitely a concern that if the aquifer gets overdrawn and sea levels rise, salt water could intrude, so everyone regulates their water consumption for irrigation and processing,” explains Alice Wise, the Viticulturalist and Education Specialist for the Cornell Cooperative Extension of Suffolk County. Though she’s quick to point out that irrigation is fairly uncommon on the North Fork since there is plenty of rain and the soils tend to hold enough water to carry the vineyards through all but the very driest parts of the year, and that wineries only use significant amounts of water directly after the harvest.

The second crucial way they are protecting the aquifer is with a focused effort to prevent the use of leachable materials. Long Island’s winemaking history may be comparatively brief but its agricultural history dates back more than a century and there’s still material in the water from decades and decades of conventional farming. “We are being very careful when making decisions about what we’re applying and focusing on regulating materials that travel quickly through the ground and into the water table,” emphasizes Wise.

Minimizing nitrogen levels is central to Long Island Sustainable Winegrowing’s strategy. Nitrogen is fertilizer and managing its use is crucial to both surface water and groundwater. In surface water, it causes algae blooms, which are damaging to all types of marine life. The North Fork’s historic oyster and scallop industries are dependent on healthy aquatic life, and healthy aquatic life supports the osprey and other local birds. Consequently, any kind of nitrogen can only be applied to the soil when the vines are active and it is certain to be taken up by the roots. Even nitrogen-rich compost piles need to be moved regularly to protect the soil and aquifer.

River management reigns in a valley

The health of Napa’s main aquifer is the direct result of conservation efforts dating back a half-century. It began with the Napa Agricultural Preserve in 1968, which established a minimum parcel size of 20 acres for vineyards and homes on the valley floor. In 1979, this was increased to 40 acres. The impetus was to protect the region’s historic agrarian character from urban and suburban sprawl. It’s difficult to imagine the level of resistance the ordinance faced, today it seems prescient, but five decades ago the battle was so heated it became source material for James Conaway’s bestseller Napa: The Story of an American Eden.

“Water conservation started just by dint of the fact that we had minimum parcel sizes and grapes became their dominant use. Vineyards have a much lower water use level than other agricultural products such as hay or fruit trees, even housing,” explains Tom Gamble, a third-generation Napa farmer and the owner of Gamble Family Vineyards.

That said, water conservation was clearly the intent of the 1994 ordinance mandating parcels be at least 160 acres in the mountain AVAs and surrounding open spaces. Its purpose was to protect the forests and the hillsides where rainwater percolates its way into the ground and recharges the basin. As a result, today in Napa County, 9% of the land is planted with vineyards, 1% houses cities, and 90% of the terrain acts as a watershed to replenish the aquifer.

Conservation was also the focal point in 1999 when a groundwater ordinance prioritized groundwater for agricultural, limited the amount of water each vineyard could draw based on fair use and prohibited vintners or farmers of any kind from selling their water rights.

Today, efforts to strengthen the watershed are led by the sustainability certification programs Napa Green and Fish Friendly Farming, along with the Napa River Flood Project. Much of the effort is directed at restoring local rivers and streams. “There is no question that if you go back to the first aerial photos and the earliest maps, you would see that we have straightened and narrowed streams and rivers, especially in the second half of the 20th century. That caused a lot of the issues we have with eroding creek banks, loss of habitat, and devastating floods. Then we built levees that weren’t very good. When the levees started to breach, they cause horrendous damage because the floods were no longer broad and shallow, but narrow, deep, and concentrated – they scoured lands and ripped out vineyards,” Gamble recalls.

The primary changes were threefold. First, purchasing marshlands near Carneros, which had been converted to hay fields, and restoring the land to its original use to protect the surrounding area from floods and tidal surges. Second, redesigning the levees to cause less erosion and downcutting in the stream beds. Downcutting deepens the stream bed, causing the levees to become unstable and eventually collapse. When a levee fails, the stream bank breaks down, and the stream bed no longer has gravel or shade to create a healthy habitat for the kinds of insects and birds that keep the local ecosystem in balance. At the same time, fine sediment pollutes the stream, choking off the oxygen necessary for fish to breathe.

The third change was taking a focused look at what was being planted at the edge of vineyards, then removing invasive species such as eucalyptus trees, Himalayan blackberry, and the various ivies that are planted around houses. These non-native species force native vegetation out their natural habitat, leading to narrower animal and bird populations. “You can change your habitat and improve the health of your vineyard through what most people call Integrated Pest Management, but I call Farming by Henry Kissinger. You’re looking for a balance of good and evil forces, a détente,” Gamble laughs.

An anecdotal sign of success is that as the river grows cooler and more robust, beavers are returning and building small dams of their own. This is leading to even higher water levels in the stream during the summer, which creates static pressure, encouraging more water to enter the ground and find its way to the aquifer.

Both Tom Gamble and Rich Olsen-Harbich attribute the success of their respective efforts to the projects being generated from the communities themselves. “These are independent-minded people so it’s not always easy to get them all to sit down at the same table and agree on stuff. That takes a little bit of relationship building and getting everybody on the same page,” says Olsen-Harbich.

“When it’s voluntary and there’s an incentive behind it, versus a strict regulatory approach that’s always punitive, you’re going to get a lot more done. We have the science, we have the way of balancing the needs of farmers and the environment, we have to cooperate and learn to work with each other,” says Gamble.“As long as there’s this creativity in the industry and communal support, we will keep going, and it has to be an evolution, not a revolution because people tend to get hurt in revolutions, either economically or otherwise.”

Sustainable winemaking is guided by the notion that a vineyard’s ecosystem doesn’t end at its borders; it is interconnected with the health of the soil, the groundwater, the local wildlife, and forests. Communal and individual interest begin to work in tandem when viticulture becomes not only about tending to the health of a specific vineyard, but also to the health of the surrounding environs, and is informed by an awareness that preventing a creek from flooding or being thoughtful about where compost is kept can preserve an entire water system.