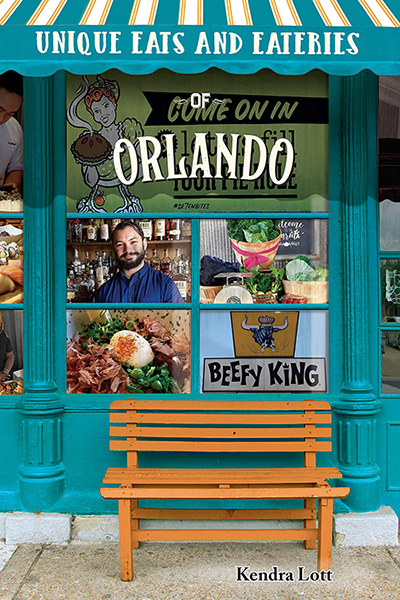 You are here: Home / Travel / Eat Like a Local in Orlando

Learn where to eat with the publisher of Edible Orlando.

There are as many hidden gems in Orlando strip malls as there are strip malls. (Take it from a native, there’s no shortage of strip malls.) Eating like a local is an admirable goal, especially given Central Florida’s year-round growing season and proximity to truly excellent seafood. But local spots often thrive because of lunchtime regulars from nearby workplaces, or massive followings on Instagram. Do you really want to spend precious vacation time waiting in line at a packed pop-up or dining two doors down from a vape store? If not, visit one of the area’s many charming main streets and pedestrian-friendly communities and enjoy distinctive architecture, awesome retail, and natural landscapes along with legit eats.

Why Go: Just 20 minutes northeast of Orlando, the city of Winter Park is home to Rollins College, a postcard-perfect chain of lakes and a Saturday farmer’s market. Tony Park Avenue offers near-equal amounts of park and avenue, and the more recently revitalized Hannibal Square just two blocks to the west is packed with independent retailers.

Where to Eat: The Ravenous Pig, LUMA on Park, and Prato for seasonal, sit-down fare; The COOP for down-home Southern specialties; Buttermilk Bakery for hand-crafted croissants, quiches, and sweets.

Pro Tip: The Winter Park SunRail stop is right in the heart of downtown (weekdays only).

Why Go: The 22-mile West Orange Trail is a favorite among area cyclists, and on a sunny weekend it can seem as if nearly all of them have made a pit stop on lovely Plant Street. And who could blame them? The restored 30s-era Roper Garden building houses the first-rate Garden Theater, where many of the talented actors who work the theme parks appear in classic musicals and more.

Where to Eat: Market to Table and Chef’s Table at The Edgewater for seasonal scratch cuisine; Plant Street Market for craft beer from the onsite
Crooked Can Brewery and laid-back bites from the Market’s other tenants; Harry & Larry’s Bar-b-Que for honest ‘cue in adorable environs.

Why Go: While the annual Mount Dora Arts Festival has wooed art enthusiasts for more than 40 years, dozens of small galleries, antique shops, and studios give this charming lakeside town an artsy feel all year round.

Where to Eat: 1921 Mount Dora for Chef Josh Oakley’s hyper-local, refined Southern cuisine surrounded by midcentury furnishings from the Museum of Modernism across the street; The Goblin Market for old school classics with local ingredients in a book-lined 1950s home.

Pro Tip: Boat tours of Lake Dora and the Dora Canal depart several times daily from the docks on 4th Avenue and in front of Lakeside Inn.

Why Go: The historic district of this Seminole County charmer boasts a handful of excellent micro-breweries within stumbling distance from one another, frequent gator sightings along the (elevated) Lake Monroe waterfront walkway and star turns at Theater West End.

Where to Eat: The Tennessee Truffle for scratch biscuits at breakfast, refined plates featuring Florida seafood and produce at dinner; Buster’s Bistro for Belgian beer and frites; The Sullivan for Scotch eggs and shepherd’s pie.

Pro Tip: In the summer months, a free trolley connects the SunRail station with downtown and the Central Florida Zoo, which might just be the only zoo in the world that sells fried okra at concessions.

Why Go: There’s a reasonably sharp contrast between the residential (Thornton Park) and business (Church Street) districts, but between them lies Lake Eola with its iconic fountain, rainbow-hued amphitheater and gentle walking trail, all perfect for people watching. Two SunRail stops serve the area.

Pro Tip: Plan ahead for dinner and a show (or a game) at the Amway Center or the world-class Dr. Phillips Center for the Performing Arts.

Why Go: Because if you’re on vacation, you’re probably already at Disney anyway, and you can enjoy free parking and admission here. There are more than sixty eateries showcasing chefs whose names you may have seen on a hotel restaurant in Vegas, a list of James Beard Award winners, or both, so you’re sure to stave off starvation long enough to sustain a visit to Uniqlo.

Where to Eat: Jaleo for paella, tapas and all things jamon by José Andrés.

Art Smith’s Homecomin’ for buttermilk-brined chicken and other comfort classics; Wine Bar George for more than 130 wines by the ounce, glass, flight or bottle along with charcuterie boards or family-style platters.

Pro Tip: For dining on the fly—you’ve got shopping to do, people!—make use of the take-out windows at many of the sit-down restaurants.

*Orlando native Kendra Lott is the publisher of Edible Orlando and author of the new guide book Unique Eats and Eateries of Orlando.