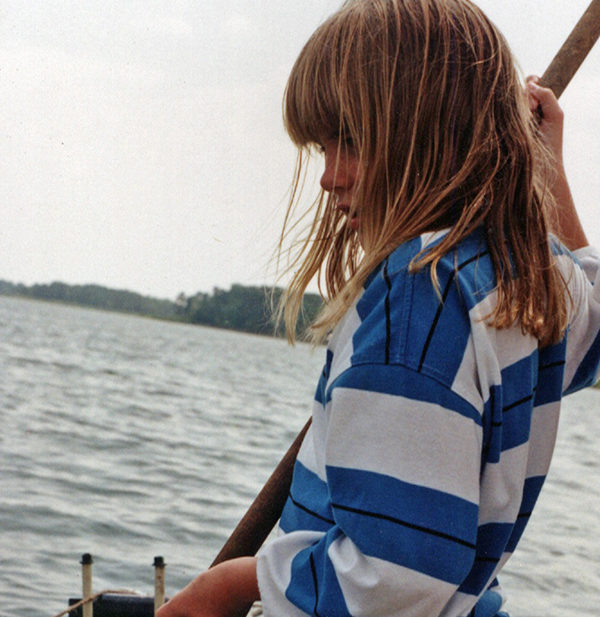 You are here: Home / Stories / #2’s: Trotlining for Crab on the Chesapeake

A pile of #2’s says summertime, unrushed afternoons, and a morning spent with dipnet in hand.

There’s just something uninspired—something ostentatious—about ordering jumbos. Demanding the biggest crabs the Bay has to offer, hulking battle-scarred survivors who have bypassed a billion crab pots only to end up savaged by your Carvel Hall knife. Go to any crab house in the summertime—Waterman’s, Harris’, The Crab Claw—and it’s those pricey jumbos that are ordered with an air of certainty and expectation. It stands to reason—they are the biggest so they must be the best.

I never order jumbos. The bread-and-butter of my crab feasts are the #2’s. These are, strictly speaking, your legal-sized crab. Five inches and above, these “keepers” are younger and sweeter, a just reward for those with the patience to pick them. A pile of #2’s cooked with a splash of beer and just the right amount of Old Bay is a celebration—of summertime, of unrushed afternoons, of a morning spent with dipnet in hand. Ultimately it comes down to how you’re used to getting your crabs. Jumbos communicate ‘restaurant,’ #2’s say ‘recreational crabber.’

I grew up earning my #2’s on a trotline. This is an old technique—much older than me, or my father who taught me, or the person who taught him—predating crab pots, invented in the Chesapeake in the 20s. A trotline is nothing more than a long line, resting on the bottom and anchored at both ends, to which a series of baits are attached at intervals of two to six feet. To run your line, you hook the line at the end and lift it over a board fitted to the gunwale of your boat. As your boat slowly moves forward, the line goes over the roller at the end of the board and the trotline is pulled up from the dark bottom of the waterway. You watch and you wait, eyes trained on the line that is hopefully weighed down with feasting, oblivious, dangling crabs.

We started our crabbing trips the night before, baiting the line as a family. My sister, father and I would sit at the picnic table on a Friday evening in the late summer light, Dad sawing hunks of sticky salted eel while my sister and I untwisted the line, popped the eel in, and retwisted it. My sister and I had not been raised to be squeamish, but we never liked the chore. Dad was buoyant at the prospect of the next day, his sweating Molson leaving tracks in the film of eel salt from his briny hands.

We would rise long before the sun on Saturdays. The dark mornings were bitter—even more so on the water—so we layered up, shorts and heavy sweatshirts and thick socks, bathing suits closest to the skin. We would launch the boat into a black harbor, our engine protesting before it caught. The dawn was a suggestion, a blue line at the horizon, as we headed out into the river towards the spot where the crabs were running.

Placing the line was important. The water couldn’t be too deep or the baits wouldn’t attract the crabs on the bottom. Too shallow and you might run aground. There were other crabbers to consider and on-the-water etiquette demanded at least 50 yards of personal space between your line and your neighbor’s or you risked getting called the “Pennsylvania Navy.” Once the line was laid, we were in for the long haul. Working steadily through the morning, my sister and I took turns at the dipnet while Dad steered the boat along the line at a painstaking speed. Your reflexes had to be fast to nab the crabs—once they emerged from the water their self-preservation kicked in and they quickly dropped off. We would cheer every keeper we scooped into our spidery dipnet, legs scrabbling and claws snapping as we dashed it into the bushel basket. Little ones or females were tossed back into the water without ceremony. The higher the sun got, the warier the crabs became. It might be midday, sometimes later, before we’d caught enough for dinner and could head for home.

Fireflies were beginning to flicker while we got ready for the feast later that evening. Beers and soft drinks were iced down in the cooler, tomatoes sliced and seasoned, and corn set to boil on the stove. Newspaper was smoothed out over the picnic table and butter knives placed at the ready. Dad, in cutoffs and dog-tired boat shoes, manned the steamer. Once the steam pot was hot, crabs were captured with tongs from the bushel basket—sometimes tenaciously connected by claws like a paper chain—and ruthlessly thrown inside. A brick on top sealed their fate and prevented escapees. It was not for the faint of heart, steaming crabs.

That subarctic sunrise, the bleaching heat of the day, the misses with the dipnet, the jellyfish stings, and claw pinches were all worth it when the crabs were dumped in a glorious red wave from the pot onto the table. They were too hot to pick but the spiced steam and intense maritime smell of them made waiting unbearable. There they were, these magnificent prizes of the day, these gorgeous #2’s. We would descend on them with gusto, breaking down their shells and prizing out the meat with slightly-burned fingers and butter knives. Your tongue went numb from the salt and you’d clean the taste away with crisp sweet corn on the cob before coming back, insatiable.

They were, without a doubt, the essence of summer, and childhood on the Eastern Shore. Beyond market price, but also free, those just-big-enough crabs and the getting and eating of them could never be sold on a menu. There is no way to name a pleasure so immense and so deeply rooted in place and time—those #2 river crabs in every way, were keepers.

*This story comes to us from Edible Delmarva.