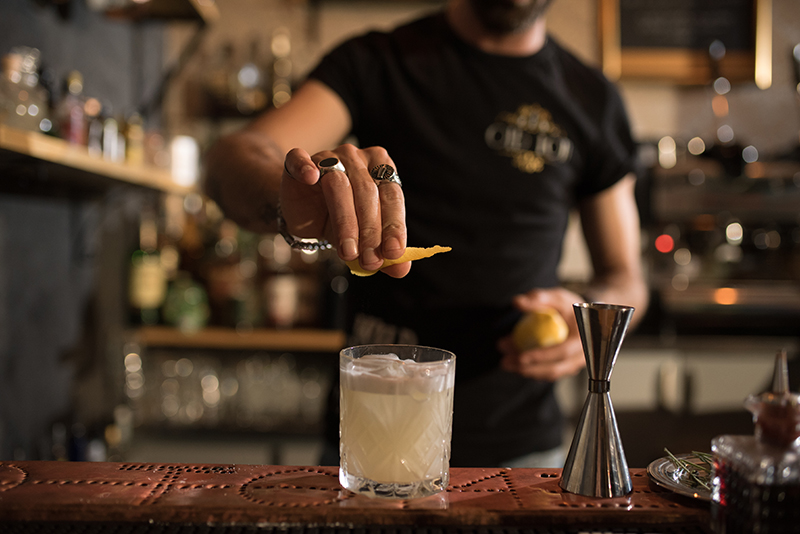 You are here: Home / Stories / The Rise of the Neighborhood Bar

The latest, most welcoming phase of the 21st-century cocktail revival.

High-end restaurant and hotel bars led the pack, ushering in an age that takes cocktail culture seriously and treats bartenders as professionals. Drinks easily hit $15, $20, or more, keeping out the riff-raff and making them special occasion places for the rest of us.

Dark, shadowy bars conjuring an earlier time followed. Here, mostly male bartenders measure ingredients into tins covered with a studied patina as their suspenders move with them as they shake.

All those serious bartenders led to the rise of house-made ingredients. Now bar tops are littered with tiny bottles of countless tinctures, bitters, and syrups, where the bartenders’ culinary prowess is on display, signaling that they are kindred spirits with chefs.

Somewhere in all that, there was also an explosion of bars where the menus feature drinks made with ten (or more!) ingredients, twisting classics further than they were ever meant to go, where creativity is prized over everything, possibly even taste.

Now that bartenders and their drinks have gained our respect, and guests have come to expect an interesting drinks menu, the newest phase of the cocktail revival comes as a response to the fatigue we feel with the previous iterations of cocktail culture: the rise of the neighborhood bar.

People want a place where they can go to relax, connect with friends, be treated well by the bartender, and get a great drink for any mood. They want a place where people know their name and their drink order, where they feel safe. They want to know they can get a shot and a beer, with a quality spirit and regular lager, a balanced cocktail, or a glass of wine from a bottle that hasn’t been open for a week. This type of bar is, surprisingly, hard to find.

When a bar does it right, though, you can tell immediately. Local or not, you feel welcome and want to stay a while. It usually comes down to a few simple things: the warmth of a space, the selection of drinks, and the friendliness of the staff. They are a clear reflection of the neighborhood that they’re in and the people who create them. There are a few bars that exemplify this perfectly, all in their own way, scattered around the country. Ticonderoga Club in Atlanta, Georgia; Nickel City in Austin, Texas; and Prizefighter in Emeryville, California.

From the outside, Ticonderoga Club isn’t much to look at. It’s tucked inside a food hall in Inman Park, the first residential neighborhood to be settled outside of downtown Atlanta. Tree-lined streets filled with Victorian houses surround the food hall, the only commercial building in the area. Once inside, historical pendants, maps, and metal signs jump off the wall, bringing it to life. The bar is a small square abutting a wall with mismatched bar stools lining the other three sides. There are tables for people to hang out and order food, and a dining room upstairs. It feels like a little oasis, chock full of character and charisma.

Owners Greg Best, Regan Smith, and Paul Calvert elected to take a non-street facing space in the market when they opened in 2015 so they could create a unique atmosphere, where history is incorporated into everything, including the font on the drink menu. “Ticonderoga Club has much of its design aesthetic rooted in historical trappings in order to give a sense of pre-dating the other commercial properties in the area,” Best says. “Our goal is to add a historically-leaning sense of place to our neighborhood wherein we can execute our work daily while adding value to our community and enhancing the pride of our neighbors in their homes.”

There’s also a Cheers-style vibe that makes Ticonderoga Club feel intimate. “Our bartenders really do know your name, and we use it, though we’re careful to do it in the same way any of us would outside of the Club,” Best says. They describe it as a “place of meeting, of congregation, of plots and schemes; a place of boisterous drinking and grateful dining, of revelry, revelation, revolution; a home for friends and wayward strangers; a club to which any striving soul and honest heart are welcome to join.” Indeed, there’s a magical power to this bar, bringing people together and creating community. Anyone would be lucky to call this bar their neighborhood watering hole.

Accessibility with a point-of-view

Nickel City, located on the East Side of Austin, in the Rosewood neighborhood. Owners Travis Tober, Craig Primozich, and brothers Brandon and Zane Hunt took over the space in 2017 after its previous tenants were evicted. They were inspired by their respective childhoods growing up in Detroit, Michigan and Buffalo, New York to create a “rust-belt chic” atmosphere, which is evident the moment you step through the door onto the turquoise and magenta tiled floor. The nod to these cities is subtle, but, as Tober puts it, “If you grew up in that area, you’re automatically drawn to it.” There are slight touches that indicate the bar is somewhere between a dive bar, a VA hall, and a low-key cocktail den. The booths and bar are lined with yellow vinyl, there’s a cigarette machine in the back, and a mid-century mirrored hutch that shelves bottles and glassware.

But the thing that really sets this bar apart is the selection of drinks. You can find a high-end bottle of whiskey, a cheap tallboy of beer, a cold glass of rose, a tiki drink, and a frozen Irish coffee flowing from the slushy machine, covered in stickers, on their menu. “I love our accessibility,” Tober says. “We’ll always have a $5 beer and shot combo, but you can also buy really expensive whiskey if that’s your thing. It’s really important to us that we cater to all walks of life, especially now when it’s pretty common to see $14-$16 cocktails.” Their selection of whiskey is extensive, enough to warrant a separate menu. “We have one rule for the back bar: it has to be whiskey. We only carry a few of each of the other spirits, including the things that our loyal regulars love.”

As Austin changes, rapidly, with the influx of tech companies and never-ending construction, it’s become increasingly important to operate a place where there is something for everyone. “It’s a huge growth neighborhood,” Tober says.  “My goal has always been to have the most diverse crowd; it makes for a way more fun evening. We achieve that by pricing and events. We love the mix of locals and tourists, young and old, which makes for an awesome, tight-knit community. And high fives and handshakes–that’s our motto.”

It’s all about the service

In the Bay Area, where cocktail bars have become a dime a dozen, the standard for quality drinks has always been high. It’s the service that makes people want to cozy up to the bar, and the bartender who remembers your name who keeps you coming back. At Prizefighter in Emeryville, an industrial area bordering both Berkeley and Oakland, close to train tracks that run along the waterfront, the hospitality has helped give the neighborhood a community feeling. They have an enormous selection of spirits with local beer and wine, with their hospitality making any guest feel welcome. The bar is open and airy, complete with a shuffleboard table in the back and a patio in the front. The bartenders breath warmth into the space and always smile when they greet you with a menu.

Prizefighter is owned by Dylan O’Brien and Jon Santer, who hired Corina Darold shortly after they opened in 2011. She’d moved to the East Bay from Eugene, Oregon by way of Atlanta, where she became steeped in the bar community (and met Greg Best from Ticonderoga Club). Exemplary service has always been at the heart of what makes her one of the key bartenders on staff. “I try to give service that is inviting and makes you feel comfortable,” she says. “I always want guests to leave feeling like they can’t wait to come back.” She treats people like they are old friends, even if she’s just met them, always going out of her way to answer questions without a hint of judgment. “I just like to make people feel like they are in a safe, friendly, neighborhood environment,” she says.

Darold has cultivated more than a few regulars this way. “We have so many great regulars and multiple people who come in every day. The first hour of my shift I can make your drink and know your name without saying anything to you. I want people to feel comfortable like they’re hanging out with a friend,” she says. The entire staff at Prizefighter operate like this, striving to make guests feel welcome. This is the mark of a true neighborhood bar.

Bars are more than just places to get a drink. They are places to unwind, to connect, and to learn. And when the proper care goes into creating a welcoming environment, an accessible selection, and hospitality-minded staff, you get the best kind of bars, like Ticonderoga Club, Nickel City, and Prizefighter, the ones that create community, the ones that make you feel like you’re home in any neighborhood.