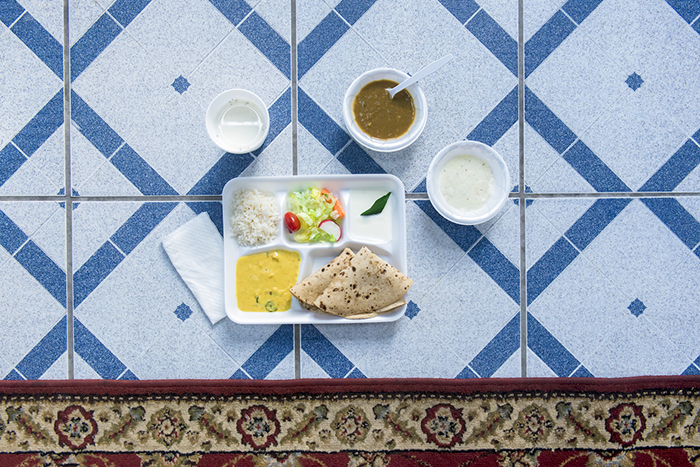 You are here: Home / Stories / The Power of Langar

That beautiful Sunday morning in August started off just like any other at The Sikh Temple in Oak Creek, Wisconsin. There was a flurry of activity as parishioners gathered into the kitchen to collectively cook langar, our communal meal for the day’s service. The sangat, or congregation, that arrives early are typically the backbone of the Gurdwara, our house of worship and learning. They help with food preparation and the special name denoted to these devoted souls is sevadar, or “those within the congregation doing selfless service.” 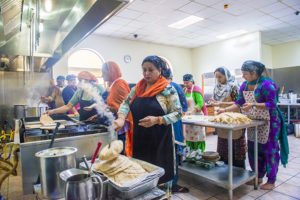 Food preparation for Sunday services typically takes several hours because it is the busiest day of worship for Sikhs in America. The ingredients for the day’s service are brought in droves. The men and women that arrive early are busy sorting ingredients, cutting vegetables, mixing dishes and cleaning in the kitchen and dining area. While everyone is encouraged to participate in seva or selfless service, some are more familiar with the details of cooking the all-vegetarian meal for the day and take charge.

One of those people is my mother, Saptal Kaur Kaleka, who is so familiar with preparing langar that she doesn’t even need measuring tools to cook for the anticipated 300+ who will show up for service. The Gurdwara is my mom’s second home and the community kitchen is her stage. Both of my parents had dedicated their lives to the Gurdwara and you could find them there four to five days a week. They both developed a deep spiritual bond with the significance of community, my mom with feeding them, and my father with leading them, as President of the Gurdwara. 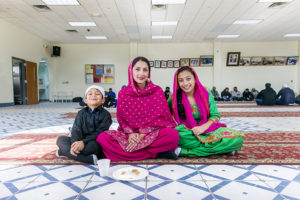 That fateful morning, both of my parents arrived early. Dad would raise money for a new immigrant family that needed help, and Mom would run the kitchen preparations for the day. The smell of samosas, ghee, roti, dahl, prashad, and rice pudding filled the air. That morning was just like any other morning at any other Gurdwara in the world.

I had been on my way to the Gurdwara that morning to drop off my children for Sunday school until my daughter informed me that she had forgotten her notebook. Her distress about disappointing her teacher made me return home to pick it up. This trip back home cost us about ten minutes, but it would be the most important ten minutes of our lives.

The Congregation Participating in Langar

It would be this decision of a concerned father and the innocent absent-mindedness of a child that would keep us safe from what became one of the deadliest hate crimes committed in a place of prayer. By day’s end, six members of our congregation were dead, one of them being my devoted father. Four others were injured, including a police officer who was shot 15 times and a priest who is still in a vegetative coma to this day. All of this bloodshed happened before the shooter killed himself while engaged in a firefight with responding officers.

Six years later, we still struggle when old wounds are gashed open with the news of yet another shooting at other places of worship. From Emmanuel A.M.E. Church in Charleston to The Tree of Life Synagogue in Pittsburgh, as we witness other places of prayer increasingly becoming the targets of hate the question remains the same: how do we return sanctuary? 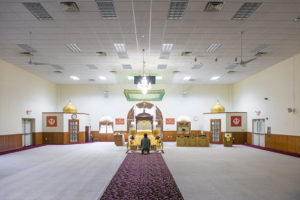 We need to remember who we are, and in our core we are healers. We are all a part of a greater human family that can find divinity within a community. This is especially true in times of struggle. Our prerogative is compassion and it is in times of darkness when we shine the brightest. We communally illuminate away the evil that attempts to separate us and divide is from the truth of Ek Oknar, “We are One.” Five hundred years ago, 15th century India was facing a similar division to what we face today, and from this misery rose the teachings of Sikhi. Based on the foundation of Oneness, Sikhi would go on to now become the fifth largest religion in the world. Today, there are nearly 30 million Sikhs worldwide who ascribe to the divine and philosophical teachings of the Adi Granth, the Holy Scripture for Sikhs. The relevance of that foundation of deliberate Oneness has become relevant more now than ever as we struggle to see ourselves in one another.

One way in which Sikhi intentionally promotes Oneness is with the intentional communal meal in which Sikhs call langar. Langar was first conceptualized in 1481 by the founder of Sikhi, Guru Nanak, who wanted to uphold the principle of equality for all. Later on, it would take the full name of, “ Guru Ka Langar,” in which all were welcomed into the Guru’s communal kitchen and the langar would be free. This was done to ensure the recognition that everyone no matter the color, caste, socioeconomic status, religion or gender is recognized as a divine source. When challenged by divisive rhetoric and historical hierarchy, the Guru would engage in compassionately challenging the existing narrative. A historical example exemplifies this perfectly.

When Guru Nanak traveled, he sought the company of humble servants who would offer him food to eat. When news of this got to the Sultan, he summoned Nanak out of anger and asked him why he did not dine with rulers and royalty. Nanak held in one hand the dry bread of the peasant and the moist bread of the Sultan in the other and squeezed both loaves. Out of the Sultan’s bread came blood, and out of the peasant’s bread came milk. Nanak told the Sultan that he “Can not eat the bread that was so cruelly earned by sucking the blood of the poor.” So everyone would come and eat this simple meal while sitting on the floor with one another. Stories of Emperor Akbar eating with peasants spread and Sikhi began to take form with the other ideals of service to others, keeping compassion on your mind and in your heart and meditating on Oneness. Every Gurdwara in the world has four main doors, each facing the north, south, east and west. This structural design symbolizes that all are welcomed, and no one shall ever be turned away. During times of battle, even so-called enemies would not be denied food or water. Over the years, langar would become a mechanism of social reform, Today there are tens of thousands of Gurdwaras worldwide that provide free communal meals to all that partake. The most famous Gurdwara in the world can be found in Amritsar, India. It is famously known as The Golden Temple because of its gold exterior, however, Sikhs know it as Sri Harminder Sahib. The history of The Golden Temple dates back to 1589 when Guru Arjun, the fifth Guru of Sikhism asked a Sai Mian Mir, a Sufi Muslim, to lay the first foundational stone at the famed temple. This was a gesture to ensure love for all and an undisputed belief that everyone is equal in the eyes of God. Today, more than 50,000 visitors come to The Golden Temple each day and partake in the communal langar. It is the biggest free community kitchen in the world and is all done in the spirit of seeing our own humanity in one another. That is what our congregation was preparing for the morning of August 5, 2012, when a white supremacist gunman walked into our place of worship and killed six reverent strangers, including my father, Satwant Singh Kaleka, in cold blood. After that, we had a choice. Did we abandon our faith or did we recommit ourselves? We overcame it because we are Sikhs, and we have a foundation where all that exists is interconnected and no one will ever tear our truth apart. 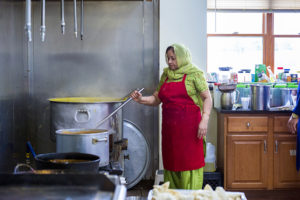 Over time our congregation has grown, and we are more appreciative than ever that we have chosen love over hate, unification over division and healing over pain. The smells of samosas, ghee, roti, rice pudding, dhal, and prashad have returned to the Gurdwara and have taken the place of the gunpowder. Some wounds still remain and we have not forgotten those that we lost that day. With heavy hearts for those communities that continue to feel the sting of the same hatred, we must usher in a more vengeful age. A vengeance that provides clarity that our great human family will never succumb to hate and separation. A vengeance that sees divinity within all. A vengeance laced with forgiveness. 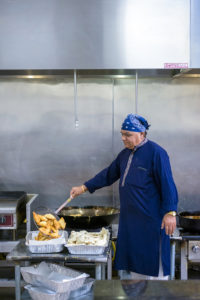 Pardeep Singh Kaleka, a native of Punjab, India, grew up in Milwaukee and today is a psychotherapist who focuses on holistic trauma-informed treatment with survivors of assault, abuse, and acts of violence. Pardeep is an author of “The Guilt of Our Wounds,” and in 2012 he founded Serve 2 Unite, an organization that engages communities in local and global peacemaking. In his practice and out, Pardeep’s passion remains one of healing and recovery.

*This article won a Gold for Best Short Soft Feature Story from the Milwaukee Press Club’s 2019 Gridiron awards. It comes to us from Edible Milwaukee. Photos by Paul Oemig.