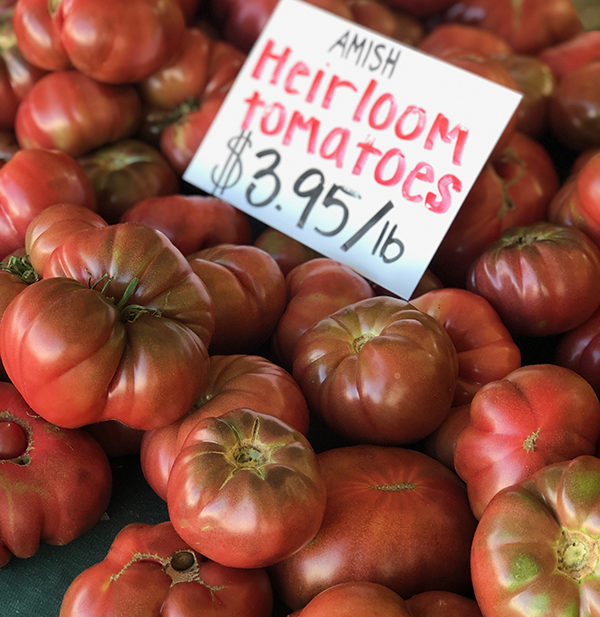 You are here: Home / Stories / The Lure of an Amish Tomato

“My wife loves this,” says Charlie. He and his wife drive up from Huntsville, Alabama a couple times each year to refill their stock of hand-shelled peas. “There is nothing like those peas,” he says, just as his wife runs over in delight to describe her latest bidding exploits. But, even more than the peas, it’s the novel experience and ambiance that keeps them coming back to the Plowboy Produce Auction.

Ethridge, Tennessee is home to one of the largest and oldest groups of Amish in the South. This countryside, once home to Davy Crockett, is now dotted by numerous farms with signs out front indicating the wares for sale inside. Posts read “Okra”, “Corn”, “Soap”, “Furniture”, and the ever popular “peanut brittle.”

Unfortunately, selling produce door-to-door is a tough sales approach in rural Tennessee. In 2006, in order to provide for their families, many in the Amish community banded together, built a small pavilion, and elected an “English” (non-Amish) local to own and operate a community auction.

Since then, every Monday, Wednesday, and Friday, April through October, crowds gather under a large awning to gaze at some of the most beautiful produce Tennessee has to offer. At 1pm sharp the bidding starts. Tennessee’s one and only Amish Produce Auction has begun.

As a ring of buyers—men and women dressed in jeans, t-shirts, and the occasional “let’s go fishing” ball cap—surrounds the fresh produce, a second crowd waits quietly around the sides. It only takes a quick glance to notice the long beards, matching blue shirts, and wide-brimmed straw hats. Despite their side-line position, these are the most critical members of the entire operation. These are the growers.

Although anyone can bring produce to sell at the auction, 95% live within 10 miles and 90% are old-order Amish. This means that in accordance with their religious beliefs, they wear plain clothing and have limited access to the outside world. They choose to avoid modern conveniences such as electricity, television, cars, and tractors. Without technological help, crop production requires added patience, attention to detail, and a lot of hard work.

Amish growing methods are largely determined by family tradition, passed down from father to son. Their apolitical stance prohibits them from using or seeking “organic” status, however they’ve been using natural methods such as meticulous bee selection and careful composting for generations. In addition, the travel limitations enforced by horse and buggy transportation options encourage farm-to-table freshness. 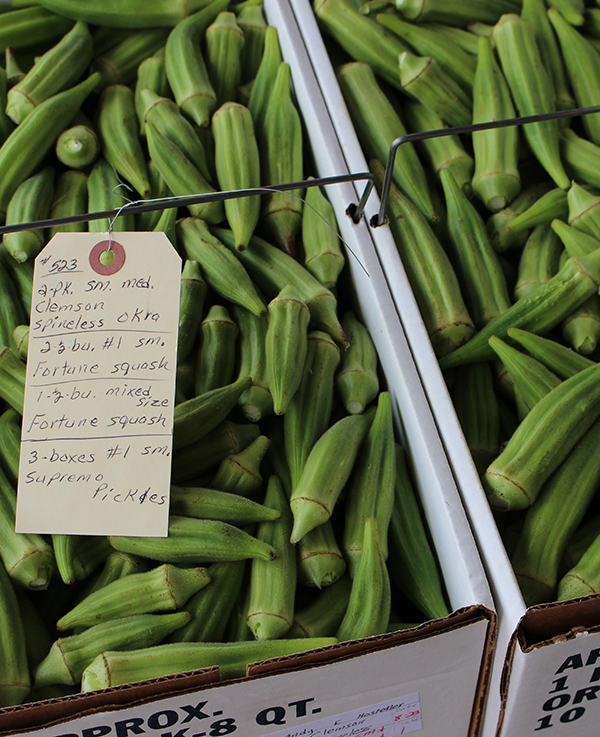 However, many of these growing practices are not unique. Organic and local farming trends have incorporated similar practices in farms across the country. What might make Amish produce special is the alluring mystique of being Amish. “Amish” is a brand. People equate Amish with freshness, quality, and peaceful simplicity. Many of the auction’s most regular bulk buyers are purchasing for resale at their own fruit stands and local markets because shoppers will pay a premium for Amish-branded produce. Amish tomatoes taste so good, in part, because they bring to mind the slow-paced, humble ambiance of a previous era. Maybe so.

This attraction, while difficult to describe, makes sense. Standing out at a produce auction, surrounded by horse-drawn buggies, rolling fields, and a sense of family and community, it is hard not to feel the magic of the Amish brand.

Hal Cole, owner of Market Fresh Produce, a large tent covered produce stand behind the Green Hills Retired Teachers building and a staple in Green Hills, is a proponent of Amish produce. He has been buying produce at the Plowboy Auction – and now direct from the Amish farmers – since he opened his stands six years ago. “We just know they have a really good product, says manager John Katras. “Their heirloom tomatoes are second to none.”

“Mostly,” explained Cole, “they live on well water and they want to feed their kids well.”

“We wouldn’t buy produce anywhere else and can’t wait ‘til we see the tent go up every May,” says one customer. “The corn, peppers, and tomatoes are what we look forward to every summer.”