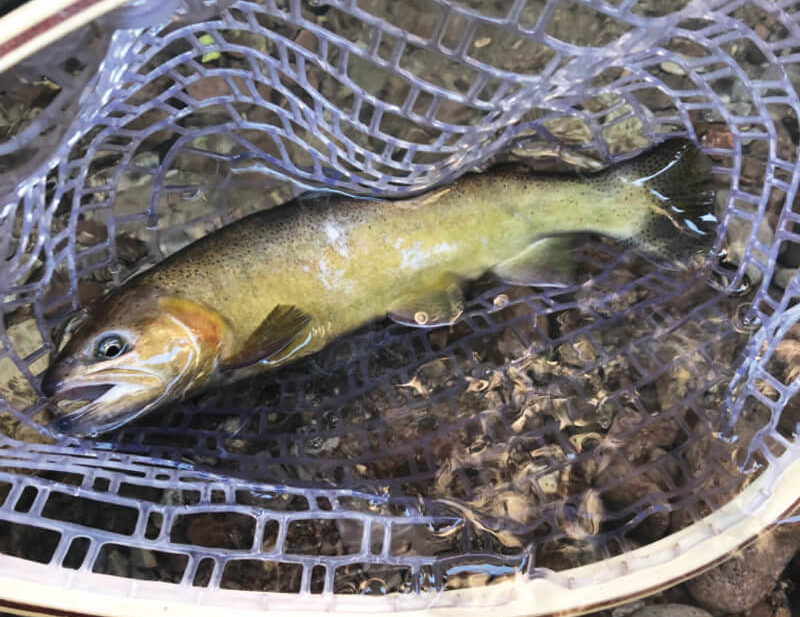 You are here: Home / Stories / The Inspiring Recovery of Gila Trout in New Mexico

Gila trout have luminous gold bodies adorned with copper gill covers and, often, a faint pink stroke at the midline. Their native habitat is the Gila River and its coldwater tributaries. In recent times, habitat loss due to a variety of natural and human-caused factors, including drought, diversions, and wildfire, has jeopardized their existence. Their survival became so precarious that Gila trout were listed federally as an endangered species from 1967 to 2006.

The recent Gila trout story is one of challenges, triumph, and cautious optimism. After the devastating Whitewater Baldy fire, fish had to be evacuated to a hatchery before toxic ash caused die-offs in 75% of occupied Gila trout streams. The successful evacuation of fish from different lineages was critical to ensuring future genetic diversity. Five recognized lineages of Gila trout, including Main Diamond, South Diamond, Spruce Creek, Whiskey Creek, and the recently added Iron Creek, are propagated at the Mora National Fish Hatchery with plans to restock historic habitat.

Thanks to the ongoing efforts of the US Fish and Wildlife Service, the New Mexico Department of Game and Fish, the US Forest Service, and others, Gila trout recovery is a testament to the effectiveness of interagency collaboration. Since 2006, Gila trout have been down-listed to threatened with a provision that allows for limited recreational fishing in specific waterways. There are close to 11,350 Gila trout onsite at the Mora hatchery for broodstock development. About 25,000 fish are stocked annually and approximately 100,000 eggs are transferred to the wild and other hatcheries. In the wild, abundance is measured in stream miles occupied. With the addition of Whitewater Creek there are now 114 miles of occupied habitat with a recovery goal of 173 miles of occupied habitat.

It may seem counterintuitive that fishing for Gila trout is encouraged. In reality, the opportunity to catch such an extraordinarily unique species drives public awareness and conservation support. A portion of money spent on state fishing licenses and taxation on tackle from the Dingell-Johnson Act is earmarked for Gila trout conservation, and, along with other federal agency wildlife funds, is essential to this restoration effort.

According to Mora National Fish Hatchery Project Leader Nathan Wiese, “Gila trout recovery efforts have succeeded to the point that limited harvest is allowed. Removing some by angling fish helps biologists confirm that populations are replenishing themselves with natural spawning and provides a wonderful shore lunch. This is a great time to be a Gila trout angler!”

Whether you have access to Gila trout or some other tasty and well-managed fishery, cook up Campfire Trout when you have the chance.

*This story was originally published in Edible New Mexico.