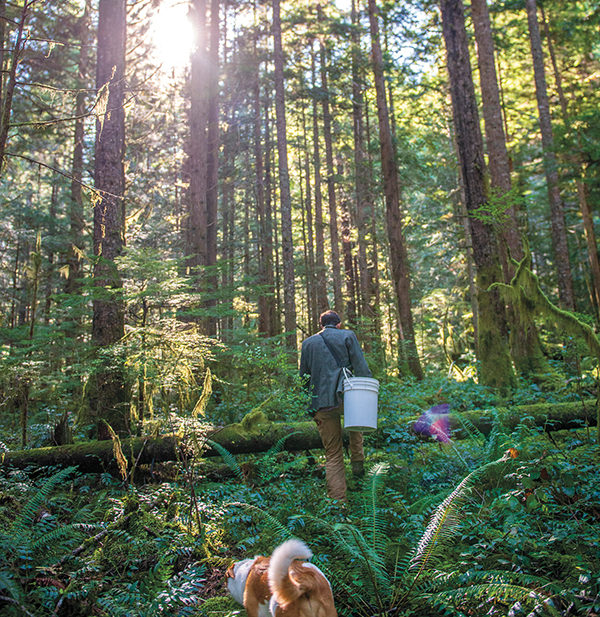 You are here: Home / Stories / The Business of Foraging

Even as a kid growing up in the Comox Valley on Vancouver Island, Alexander McNaughton knew how to find wild edible treasure.

“I probably picked chanterelles before I was 10 years old,” says McNaughton, whose childhood pastime grew into a career as a professional forager.

“Grizzled old dudes” taught him where to find and how to harvest the delicate golden mushrooms, he says. Now, McNaughton does the same with chefs on Vancouver Island and the B.C. mainland, also supplying top kitchens with the results of his daily sourcing treks on the Sunshine Coast.

McNaughton, 31, is a forest, field and seaside seeker and teacher. He began his business as an urban fig forager, selling the fruit to Vancouver restaurants.

From collecting fragrant spruce tips for brewing to plucking sweet, midnight-blue salal berries, McNaughton has been a professional forager for a decade, finding food in ancient ways while rocking a hip social media presence with owlish glasses and a broad-brimmed hat. Wild mushrooms are his passion.

He goes foraging with kitchen staff to teach them skills, like a recent trip to sleuth and pick with the culinary team at the Nimmo Bay Wilderness Resort in southern Great Bear Rainforest.

McNaughton and his partner Mackenzie Alsager are also farmers, living on an 11.5-acre property in Kelly Creek near Powell River. They grow “lots of cool stuff,” he says. McNaughton has added that bounty to his chef distribution network, selling about 30 crops that he grows, including greens, garlic, peas, melons, tomatoes, and rhubarb.

The farm also houses McNaughton’s workroom and warehouse, including a commercial-grade facility to clean, sort, properly store and package items he ships to chefs around British Columbia.

He carefully packs the orders, taking the boxes to the airport himself for shipping, sometimes within hours of harvesting. His favorite orders to fill are chefs’ wish lists. McNaughton works up to 16-hour days in the busy harvesting seasons, doing all the work around foraging, prep, and delivery, along with running the farm. His minimum order for a restaurant is $300. He’s not interested in selling to the public, who tend to want annoyingly small volumes.

It’s a challenging way to make a living and isn’t always profitable, he says. But sometimes it is.

“Once, in my younger days, on a remote high mountain, I found a patch of Pine mushrooms in Pemberton. A hundred pounds in a day. That’s a $2,000 day,” he says.

The payoff for long hours also comes in terms of lifestyle, says McNaughton, who is happy to be outside daily, walking beaches, forests, and mountains.

Before we spoke on a late-spring morning, he had been up since before dawn, harvesting wild roses for his chef clients.

McNaughton credits TV shows like “Top Chef Canada” with nudging foraging further into the mainstream. Paul Moran, the executive chef at 1909 Kitchen at the Tofino Resort and Marina and a long-time forager, won the Top Chef Canada title in May with foraged foods on his prize-winning plates.

Chef Warren Barr, former executive chef at the Wickaninnish Inn, who opened Pluvio Restaurant + Rooms in Ucluelet with his partner Lily Verney-Downey earlier this year (where he offers this wild mushroom velouté in season), says foraged foods are like storytelling on a plate. And customers love that.

McNaughton stands apart because he treats foraging like a business, says Barr, rather than the freelance pickers who just showed up with items for sale at the kitchen door.

“Alex is good at finding stuff in plain sight as well as woodsy stuff,” says Barr. “He’s really into it… and he’s definitely a character.”

McNaughton was “my go-to guy at the Wick,” when Barr needed large volumes of foraged items like elderflowers, wild roses, and berries.

A dedicated forager, Barr orders fewer items from McNaughton now that he has a smaller kitchen to stock. He figures he saves about $100 a week in food costs by foraging with his staff.

“Alex educated me in how to forage and what to forage for,” says Barr. “That’s his legacy.”

“I take great joy in knowing things I forage end up on amazing plates across the province,” McNaughton says. “The chefs honor me with their craft.”

*This story comes to us from Edible Vancouver Island. Photography by Danika McDowell. Linda Barnard is a Victoria-based writer. Follow her foodie adventures on Instagram: @barnardwrites