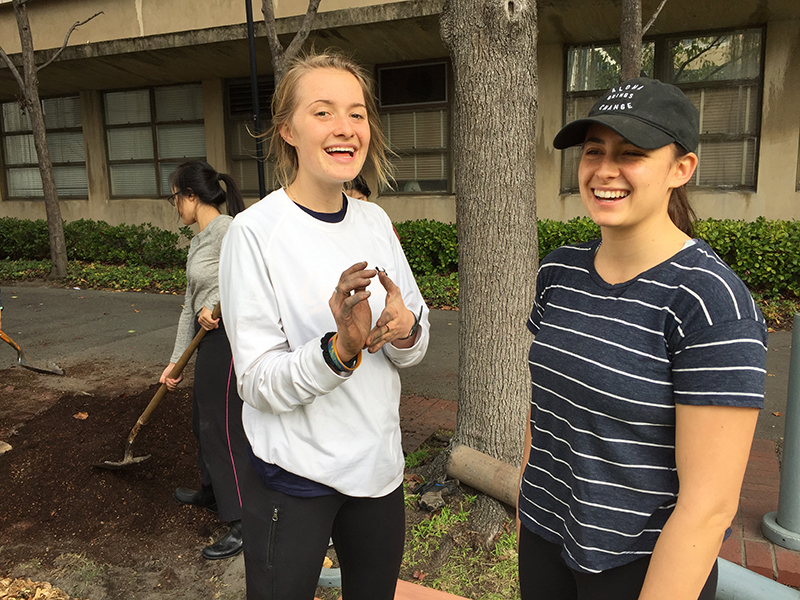 You are here: Home / Stories / Teaming Up Against Toxins

University of California Berkeley students and groundskeepers see beyond the spotless green fields.

In the spring of 2017, UC Berkeley junior Mackenzie Feldman heard her coach tell the players not to chase the ball in bare feet if it went off the court. The reason? Ranger. The herbicide, made by Monsanto, had just been sprayed nearby.

Feldman was immediately alarmed. Part Hawaiian and born and raised on O’ahu, she is all too familiar with the toxic chemicals—made by corporations like Monsanto, Pioneer, and Syngenta—known to be in heavy use on the islands. Hawai’i, she says, is “ground zero for big ag,” which many believe is related to the state’s high rate of birth defects and the emergence of cancer clusters in some communities.

Feldman’s outrage struck a chord with her teammate, then-freshman Bridget Gustafson, who hails from Illinois, another big-ag state. She says it was Feldman’s urgency in questioning the spraying that initially got her attention. Over time, she says, “I realized it was a human rights issue; the cost is the health and safety of the people spraying, the rest of the student body, and whoever else is using the campus.”

The two teammates set up a meeting with Casey Cox, UC Berkeley’s supervisor of athletics fields and turf. They arrived armed with 20 pages of research on glyphosate, the active ingredient in Monsanto’s herbicides Roundup and Ranger, which was declared a probable carcinogen by the World Health Organization in 2015. (Monsanto was acquired by pharmaceutical giant Bayer in 2018.)

To the students’ surprise, the resistance they got from Cox was purely practical. He agreed with their goal but just didn’t have the labor to hand pick all the weeds. Perhaps the volleyball team could help out? “It was easy,” says Feldman, who convinced all 19 team members to participate. The student government also stepped up to help write policy for the Herbicide-Free Cal campaign and create a logo [ed: UC Berkeley is locally known as “Cal”].

Going to the source

Following her experience on the volleyball court, Feldman penned an op-ed about herbicides on campus for the student-run newspaper, The Daily Californian. She’d been learning more about the issue through an environmental biology class taught by Professor Ignacio Chapela. She’d also connected with Professor Philip Stark and his colleagues at Berkeley Open Source Food (BOSF), which had started a petition to reduce herbicide use on campus. BOSF promotes foraging from the nutritionally rich food resource offered by wild and feral edible plants, pointing to the great advantages of reducing both water use and the toxic herbicides we would otherwise be using to kill plants deemed to be weeds. 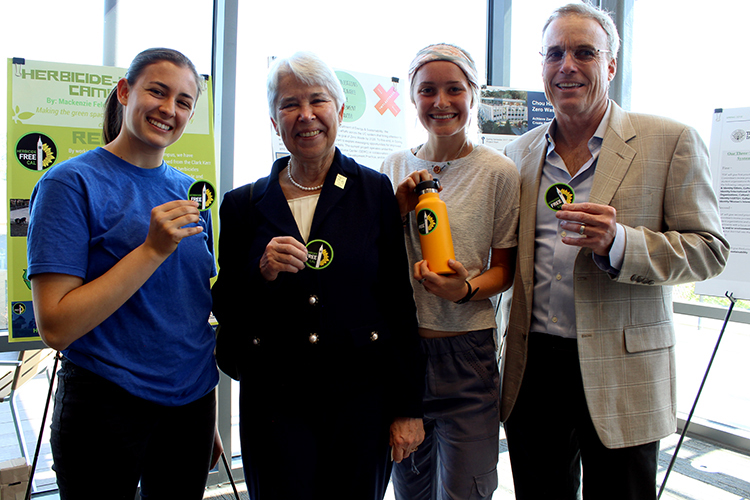 At the University’s 2018 Sustainability Summit, Mackenzie Feldman (left) shows off the Herbicide-Free Cal logo with UC Berkeley Chancellor Carol Christ, Bridget Gustafson, and Theron Klos, operations manager for landscape services. Since that time, Feldman has graduated and is leading an Herbicide-Free UC campaign, with progress already well under way at UC Davis.

Feldman’s next step made all the difference. “What really helped,” she says, “was going to the source and asking Theron Klos [UC Berkeley’s operations manager for landscape services] to reduce herbicide use.” Klos has subsequently become an integral part of the transition away from herbicides.

“The students are spectacular,” he says. “I appreciate their drive and energy to go herbicide-free.” Gustafson describes the overall approach as “a collaborative model” in which students are available to help with weeding, sheet mulching, and other tasks. At five workdays held to date, Feldman and Gustafson recruited volunteers from campus service organizations. In addition, the beach volleyball team has taken responsibility for weeding the area around their court.

In March 2017, Klos attended a seminar on organic turf management where he met Susan JunFish, director of the nonprofit Parents for a Safer Environment. JunFish had also gotten to know Feldman and helped secure a $10,000 grant to bring the nonprofit Beyond Pesticides (BP) to campus. In June 2018, BP horticulture expert Chip Osborne conducted soil analyses and worked with Klos to develop an herbicide-free protocol for eliminating weeds on the two largest green spaces, Memorial Glade and Faculty Glade, as well as along the northern slope near the East Asian Library. BP promotes an organic approach that suppresses weed growth by creating healthier soil through sheet mulching, aeration, native turfgrasses, proper watering, and landscape design.

Klos now has administrative support for these projects from Chancellor Carol Christ, Vice Chancellor Marc Fisher, Associate Vice Chancellor Sally McGarrahan, and Associate Director Felix de Leon. The support includes funding for seed, materials, compost, and some staff time. “We want to make sure it works and see how costly it is and whether we can really sustain it,” says Klos. Three years down the road, he adds, they’ll reassess and decide whether to incorporate Osborne’s method into other lawns.

Herbicide-Free Cal held a public campus event in November 2018. It featured Dewayne Lee Johnson, the 46-year-old former groundskeeper for the Benicia Unified School District who was the first person to successfully sue Monsanto. A San Francisco jury agreed with Johnson’s claim that his advanced lymphoma, a cancer of the lymphatic system, was caused by exposure to glyphosate. The jury also unanimously found that the corporation had failed to warn Johnson and other consumers of the carcinogenic risks of using the product. His award of $289 million was reduced by the judge to $78 million. Since this case, a second plaintiff has been awarded over $80 million in a similar lawsuit.

Before introducing the panel for the campus event, Feldman described how she and Johnson had become friends when she and her mother attended his trial. Fighting tears, she told a packed room that she recalls feeling overwhelmed by emotion at the trial as the opposition gave its closing remarks. Right then and there, she wrote Johnson a letter stating her admiration for his efforts and describing her work on the Herbicide-Free Cal campaign. Feldman gave the letter to one of Johnson’s lawyers, who passed it on.

Also on the panel at the campus event, UC Berkeley professor of integrative biology Tyrone Hayes spoke about his research on the agricultural herbicide atrazine. He described its harmful effects on frogs and recounted the steps manufacturer Syngenta has taken to intimidate him and discredit his work. Another panelist was Diane Williams, an educator at Planting Justice, who described her successful battle with the Oakland Unified School District to end the spraying of Roundup on school property.

My mom was yelling at the Monsanto guy

Feldman’s activism connects back to her family: She describes attending a “so-called farmers market” on O’ahu with her mother in the summer of 2015 after Maui County voters had narrowly supported a ban on GMOs. Monsanto was running TV commercials saying the ban would cause a loss of jobs. At this market, representatives from Monsanto, Dow, and DuPont claimed that Roundup was safer than apple cider vinegar. “We got kicked out because my mom was yelling at the Monsanto guy,” Feldman recalls.

Feldman graduated from UC Berkeley in 2018 and recently launched Herbicide-Free UC with the goal of banning herbicides at all the University of California campuses. The national nonprofit Food & Water Watch has signed on as Feldman’s fiscal sponsor, and she recently hired two fellows each at UC Davis, UC Riverside, and UCLA. In addition, Feldman continues to collaborate with Gustafson, who is now leading the campaign at UC Berkeley. In her spare time, Feldman is writing a cookbook with her mom. 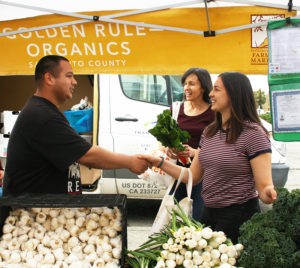 On this visit to the North Berkeley Farmers Market, Mackenzie Feldman ran into several people she had met through her work advocating for the elimination of harmful chemical inputs on farms, campuses, and community spaces. Here she updates farmer Eddie Diaz of San Benito County farm Golden Rule Organics on her progress with the campus initiative.

In January 2019, students held a groundbreaking and sheet mulching event to create an herbicide-free herbal garden just outside campus eatery Brown’s California Café. UC Berkeley senior Hannah Haugenes of the group Housing & Dining Sustainability Advocates wrote a successful grant to establish the garden, which will supply fresh culinary and medicinal herbs to the campus food pantry, the larger campus community, and possibly to the café kitchen. Haugenes coordinated the project with Theron Klos, whose grounds crew provided equipment and will install drip irrigation. In addition to preparing the ground for planting, Haugenes says, the event was an opportunity to talk with other students about “a larger transition on our campus toward organic urban gardening.” Feldman and Gustafson joined about 15 other enthusiastic students who together spent several hours digging out the lawn and layering the dirt with cardboard, compost, and mulch.

Gustafson is thinking ahead about the possibility of incorporating her work on Herbicide-Free Cal into her career. She’s studying molecular environmental biology and says she may even do research on pesticide toxicology when she graduates. “So many of the pesticides sprayed contain carcinogens,” she says. “It seems like such an unnecessary risk, and the value of human life is so much greater than the need to have a spotless green field.”

*This article originally appeared in Edible East Bay, where the author, Rachel Trachten, is associate editor and writes about food and gardening in connection to social justice, education, business, and the environment. Photos courtesy of Edible East Bay.