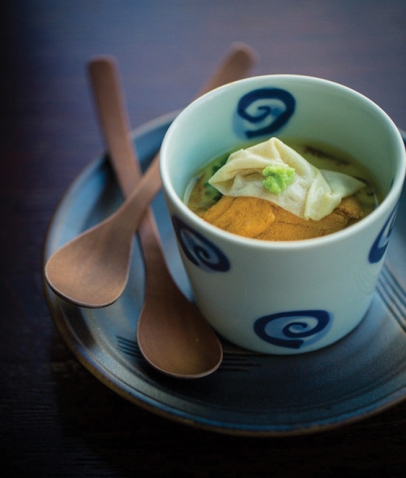 You are here: Home / Stories / Eat Your Words: Itadakimasu and Gochiosama Deshita

As the old saying goes, two is better than one, which is why two words are on the menu this season. The Japanese new year is the same as our Gregorian new year, and it’s a good time to reflect on two Japanese words, itadakimasuand gochisosama deshita. These words are bookends to a meal, whether at home or in a restaurant or as a guest in someone’s home. The breakdown of each brings up the cultural history of Japan, as does any etymological digging, and the results are gorgeous. The themes are humility and interconnectedness—both of which are balm for the soul at the end of a long year and the beginning of a new one, when hope feels like a very fragile light.

Itadakimasu is said at the beginning of each meal, very much the way we say, “Blessings on this meal” or “Bon appétit.” But a little digging shows that its kanji, or symbol, itadaku, means “mountaintop,” which denotes a sense of raising up and, in turn, the humility of the receiver. A picture is worth a thousand words. I called up Yuko-san Hayashi, owner and head chef at Yuzuki Japanese Eatery at 598 Guerrero Street. She and I laughed about the way we take our own language for granted until a nonspeaker asks what something means, or what the root is. Says Hayashi, “Itadakimasu means “receiving,” so we are receiving the life of vegetables, fruits, meats and fish. To receive these becomes our life and we give thanks for receiving the life of these living things. It also means that we give appreciation for the people who made it possible to eat the food.” That’s a lot of meaning packed into one word, and while it may not be the downbeat of the gesture when sitting down to eat, the meaning is still there and sets a tone wherein the food won’t be wasted because the life and effort that has gone into it has been recognized.

Sitting down to eat at Yuzuki instantly feels like a reprieve from the hypersaturation of information and consumerism that has become our daily low-grade fever. The acoustics are muted, thank goodness, and the specials are hand scrawled with black ink on fabric scrolls in the center of the room. The portions are small, but the textures and temperatures play with each other in mellow concert so each bite is more filling than I expect. I order the Zaru Tofu, a house-made specialty, and the curd melts on my tongue against the crystals of Maldon salt. Slow down, it says. A traditional Japanese saying goes, “Seven gods live in one grain of rice.” Yuzuki uses shio-koji, or salt koji, which is a fermentation process that brings out the umami flavors, down to each grain of rice. So if God is in all things, and fermentation is billions of invisible live creatures, then that saying is true in this meal on many levels. Between my sake that holds a quenching coldness that recalls the one and only time I ever drank straight from a stream on a remote island in Canada, and the tiny clams in a sake broth that even my bones relished, itadakimasu was in every bite, as was gochisosama deshita. I honestly looked at my calendar to see when I could make time to eat here again.

Gochisosama deshita, or gochiso for a more casual setting, means “to run around,” or “to make every effort for the guest.” There are subtleties within that meaning as well, because gochiso means “luxurious food” or “feast,” even when the meal has been simple. Gratitude is an interesting sentiment. It changes meaning very easily, much the way salt will change roles in food; it can enhance flavor, mellow out bitterness, brighten sweetness—but it is essential in any given situation, as much as it is essential for our health.

Gratitude has always been something I have to remind myself to come back to, and to do it with authenticity. There’s nothing worse than hanging out with that friend who drips with saccharine gratitude on grand scales when you yourself are having feelings about some part of your life that is just plain aggravating. Let’s be real. I like gratitude in small sips and great big sunsets, but it often feels like an individual effort, not a cultural inheritance, and I think again of Hayashi’s food.

Yuko Hayashi is from Kyoto and we talked about what seasonal food she might eat right now that would invoke a real sense of gratitude and receiving. “Fugu,” she replied enthusiastically. “A fugu-nabe, because the broth of the puffer fish is so delicious, especially on a colder winter day.” I stop to consider when I am most compelled to receive and give thanks in a humble pause when I am eating. I realize I bow over any bowl of soup without realizing it, as if my body knows the action of gratitude and receptivity before my mind does.

This isn’t to say I’m assuming every Japanese person has some deep etymological experience at the front and back ends of their meal, just the way I don’t reflect on the interdependence of life when I say thank you to whomever prepared my meal. But this is why writing about words is so fulfilling. Yuko-san Hayashi and I both marveled at how we carry these little boats of meaning when we speak, filling their sails with our breath and thinking nothing of it. And there it is—a whole legacy behind a habit and tradition. Gratitude comes from the Latin gratus, meaning “thankful, pleasing.” If I look further on my end of language, grace came from an even older root that meant “to favor,” which meant “to show kindness to.” So to grace and give thanks for our food means we show kindness to…life. Much needed, lately.

The closure created between itadakimasu and gochisosama deshita is my new homing beacon for this year, when I want to reclaim what being American means to me and take a little less at a time so I can share more grains of god and rice.