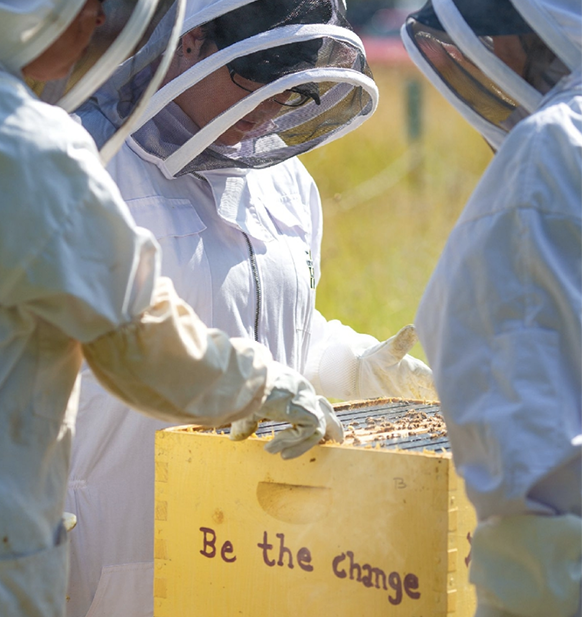 You are here: Home / Stories / Helmets to Hives

Even the most casual observer notices that the military is characterized by a sense of order.

Each branch is highly organized and every individual has a mission. After service, veterans often relate to this type of environment. Similarly, bees live in meticulously structured habitats.

A local veteran developed a way for these two groups—veterans and bees—to work for each other’s benefit. Steve Krumm created Helmets to Hives to help veterans transition more fully into society while learning beekeeping.

Krumm spent 16 months as an artilleryman during the Vietnam War. Once he got out of the army, he ultimately became a horticulturist and retired to Western New York after working in the public parks system in Portland, Oregon.

His interest in honeybees and other insects emerged as an extension of his work. “As a horticulturist, I understand the relationships between pollinators and plants,” says Krumm. “Without pollinators, we don’t have plants and without plants, we don’t have humans.”

That is not an exaggeration. The USDA estimates that 80 percent of insect crop pollination happens thanks to honeybees. One-third of the human diet is derived from insect-pollinated plants.

One thing Krumm wanted to do in his retirement was to take up beekeeping as a hobby. Another thing was to volunteer to drive veterans to their appointments through the Veterans Administration. That’s when the idea for Helmets to Hives began to blossom.

Krumm says he was interested in providing veterans with a pastime and maybe a small-scale agricultural business in beekeeping/honey production as a way for them to be together, relax, and learn a new skill in a peaceful, safe, contemplative environment.

“I had such close connection with veterans that I said, ‘[Beekeeping] would be something that veterans would be interested in!’” he explains. “So I started doing some research.”

A number of agri-therapy programs around the country help veterans heal through beekeeping and other aspects of farming. Helmets to Hives is the first of its kind in Western New York.

While humans and honeybees have had a working relationship for thousands of years, now is an especially good time to venture into beekeeping. Honeybees are threatened by Colony Collapse Disorder (CCD), from a series of environmental missteps in agriculture. According to Krumm, this is due to indiscriminate pesticide usage, destruction of habitat, and the introduction of various types of disease vectors from outside the country.

Whether bees are raised for pollination, honey or consumer products derived from beeswax, apiculture is big business. According to Cornell University, each year bees contribute $500 million to the New York economy alone.

To get himself up to speed, Krumm took a short course on beekeeping at the University of Guelph in Ontario, which has an extensive beekeeping research program. Its Honey Bee Research Centre traces its apiculture training and research back to 1894.

With the education piece in place, Krumm’s challenge was to find somewhere to do the actual beekeeping. He lives on a small lot in the city, which is not ideal. 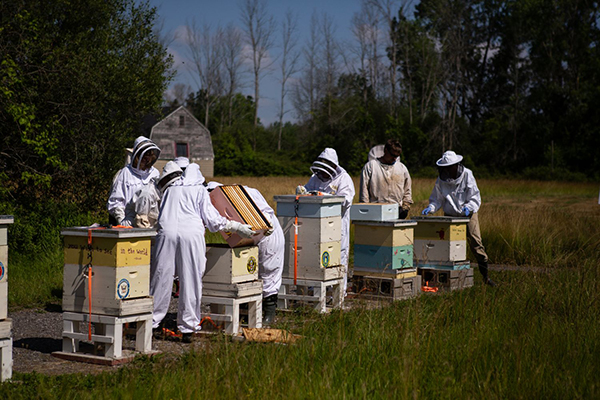 Serendipitously, he was connected with the Buffalo Niagara Heritage Village in East Amherst; they were interested in his idea. With the help and guidance of the organization’s Sara Miller and Masterson’s Garden Center in East Aurora, Krumm set up the program. While classroom work takes place in the Education Building on the historical village’s 35-acre campus, the teaching apiary lives on a quarter-acre site at the back of the property, away from public spaces.

Helmets to Hives is not a therapeutic program per se. Rather, it’s designed to give vets something extra in addition to the services and therapies they get from the Veterans Administration and service organizations in the area, such as the Buffalo Vet Center and Veterans One-stop Center of Western New York.

There are two parts of the program. During six consecutive midwinter weeks, students attend two-hour classroom lectures on Thursday evenings. The classes provide an overview of beekeeping including its history and morphology, physiology of bees, using hives for containing bees, and extracting and bottling honey.

From May through October, the apiary program runs every other Saturday morning from ten to noon. There, the students suit up in their protective beekeeping gear and work with the hives, applying what they learned in the classroom. Four mentors from the Western New York Honey Producers Association assist the students in practical application.

Krumm notes that there are fewer than 10,000 bees in the hive in early spring as they come out of hibernation. As midsummer approaches, the population grows and hits its peak at 90,000 per hive. In the fall, the population drops to about 20,000 bees.

When the program started in 2018, it was “veterans only.” They learned about beekeeping but also built camaraderie and esprit de corps. After the first year, however, the decision was made to open enrollment to non-veterans, as well.

“Rather than isolating ourselves as ‘just veterans,’ we are (also) members of the community,” explains Krumm. “So then we decided to open up the program to a community component. That has worked really well.”

Currently, there are six spaces for veterans and six spaces for community members. They learn and work side-by-side, but under the auspices of the Helmets to Hives program, everything the veterans need to participate is free.

For non-veteran community members, the cost is $250 for the entire season and includes protective gear, class materials, instruction and practical experience in the apiary. For non-veterans wanting only the classroom instruction, the fee is $50.

The hope is to continue to graduate hobbyist beekeepers who will have one or two hives of their own so they can produce clean and organic honey for their own use or to sell at farmers markets.

*This story comes to us from Edible Western NY. Photos by Jill Bornand.