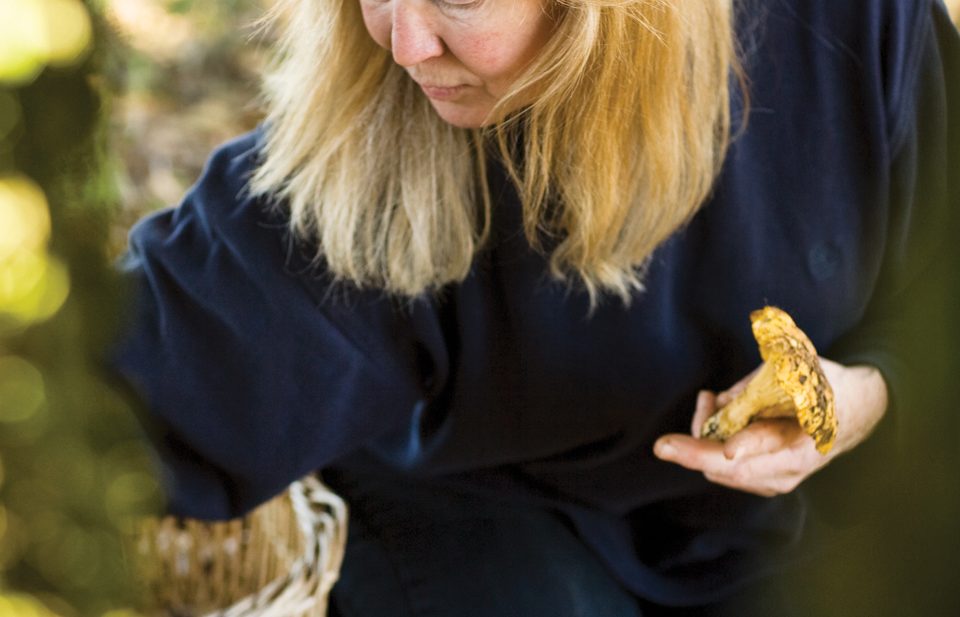 You are here: Home / Stories / The Headhuntress of Wild Mushrooms: Connie Green

Connie Green knows the forest better than anyone. But when the woods are tinder dry, our beautiful local chanterelles go into hiding.

“The cupboards are exceedingly bare,” says Connie Green. She enunciates her words, shouldering open the walk-in with a flick of her long white hair, catching you off-guard with an icy blue stare. A couple of months into what should be the rainy season, she’s usually up to her gills in mushrooms by now, starting with the first flood of porcini, which thrive in the damp. She calls herself the “headhuntress of wild foods.” No one disputes the title. “In the 35 years I’ve been foraging in these woods, we’ve never had a season like this one,” Green confides.

Driving through Sonoma, you’ll pass parched grass and yellow vines. But climb a long and winding back road, and you’ll drop down into wizened trees. This is off the beaten path for cabernet addicts. Look closely, and trunks are still blackened. The wine country fires of 2017 hit hard here—three properties surrounding Green’s home and barn burned, and she was lucky to escape the flames. Farther up the coast, her hunters are picking their way around the more recent wildfires, especially the Mendocino Complex fire, the largest in California history, with more than 450,000 acres burned.

Mushrooms have a powerful association with fire. Morels are the chasers, springing up in bumper crops the year after a forest has burned. Native Americans trailed after these flavorful specimens, and there’s a myth that European kings had to ban peasants from setting fire to their own lands, but Green refuses to believe it. “If I had a choice between a one-time flash of morels and our natural season filled with chanterelles, porcini and more, there’s no question: I would choose that rich diversity, every single time.” The reality is that because of the drought in California, we have both more fires and fewer mushrooms, the latter depending on moisture to grow.

Northern California is home to a striking array of wild mushrooms, because as foragers like to say, our winter is the longest autumn in the world. In fall, frilly chanterelles usher in the season, with plump porcini starting in the Sierras, followed by spice-scented matsutake, beloved by Japanese chefs. In the heart of winter, black trumpets reveal dramatic color and silky texture, seductive in a creamy risotto. Jolly little hedgehog mushrooms tend to lose their teeth, but you won’t mind that in a rustic stew. Yellow feet fungi look drab, but they’re the European favorite for nutty flavor. Candy caps, exclusive to our coastline, are a sweet treat, releasing a maple aroma as they dry, perfuming a bread pudding. More unusual, the cauliflower mushroom almost resembles a brain, but just sink the petals into soup for delicate crunch. Come spring, morels steal the show—as small as a thimble, as big as a Persian slipper, and worth stuffing with everything from goat cheese to duck liver. 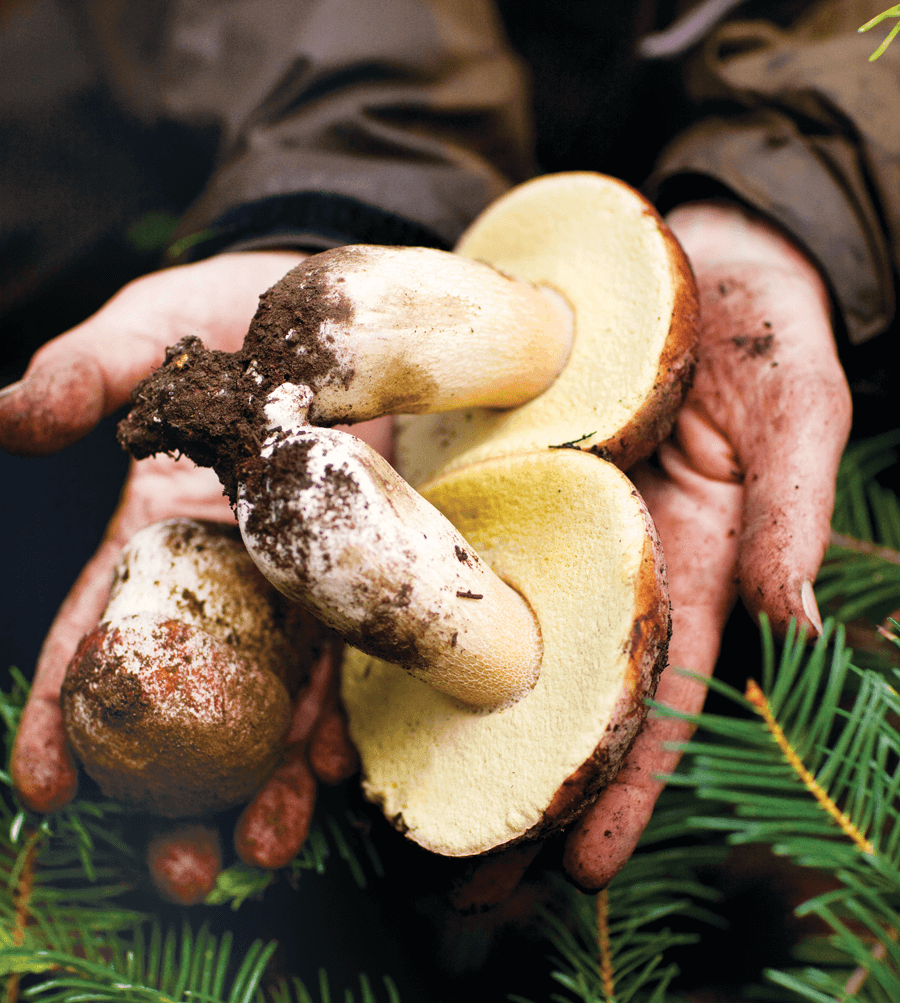 A handful of boletes are distinguished by their spongy pores (no gills).

Chanterelles were Green’s first love. Her late husband was from Estonia and from a long tradition of “crazy-ass, mushroom-hunting maniacs,” and foraging helped his family survive during World War II. When the couple moved to Sonoma County in the 1970s, Green would wake before dawn, hike six or seven miles, and fill up metal-frame backpacks and buckets. “Foraging is an enormous investment in time, miles and calories,” she says. “And that’s before you start cleaning.” Washing mushrooms isn’t just okay, it’s required, and each variety has its own needs, but chanterelles are the most demanding, mucky with mud and needles. In the early days, Green would stay up until 2:30 in the morning, standing in front of a sink, armed with a toothbrush. She developed a system with speed racks and fans, to remove exactly the right amount of moisture, so her chanterelles would sizzle the moment they hit a sauté pan.

It wasn’t long before she started knocking on doors. She walked into one of the fanciest restaurants in Napa with a basketful of beautiful local mushrooms, and the French chef looked down his nose. “Chanterelles are not grown in California,” he sneered. But for every snob, a dishwasher would wave her down on the way out, wanting to see the goods. “De dónde vienes?” she’d ask. Oaxaca. Guatemala. Mountain country. “The irony is that everyone reveres French chanterelles and Italian porcini,” Green says. “But you know who really knows their mushrooms? Indigenous cultures.”

Fortunately, more open minds tasted the rewards. Green counts herself lucky to have worked with some truly great chefs. She considers Thomas Keller an old friend, having sold to the French Laundry since before they opened doors, and today, her wild mushrooms roam San Francisco, spotted on plates at Delfina, Nopa, Octavia and so many others, as well as Rainbow and Bi-Rite groceries and Good Eggs online. She’s never really done farmers markets. At one point, an organizer asked if her ingredients were organic. “Can you imagine?” Green still ponders. “Organic is such a human-centric concept. That means nothing when you step off the farm and into the wild world.”

There aren’t many female foragers, and fewer who will strike out alone. True to character, Green prefers it. She’s received nothing but respect from her male colleagues, which she attributes to western self-reliance and a strong code of ethics. She walks past at least a third of the mushrooms, leaving the littlest until they’ve grown big enough to drop spores. Foraging has become more popular, and there are certain techy types, she says, who go on a few guided trips and think they know it all. Still, she can’t fault the enthusiasm of anyone who wants to pull on a pair of hiking boots or bring these wild and wonderful foods into the kitchen.

So the next time you spy an oddly shaped mushroom on your plate, before you spear it with a fork, take in all of the details—the earthy colors, rough textures and fierce flavor. “What you have to appreciate about wild foods is that we really have no control. None whatsoever,” Green says. Foragers are closer to the natural world than maybe any other food producer, so they see changes first—studying weather patterns, returning to the same patches year after year, watching the rich life of the undergrowth. “In this moment, what we desperately need is for more people to connect with the natural world,” Green says. “It’s all of our responsibility to observe and preserve.”

* This story was originally published in the winter 2019 issue of Edible San Francisco.