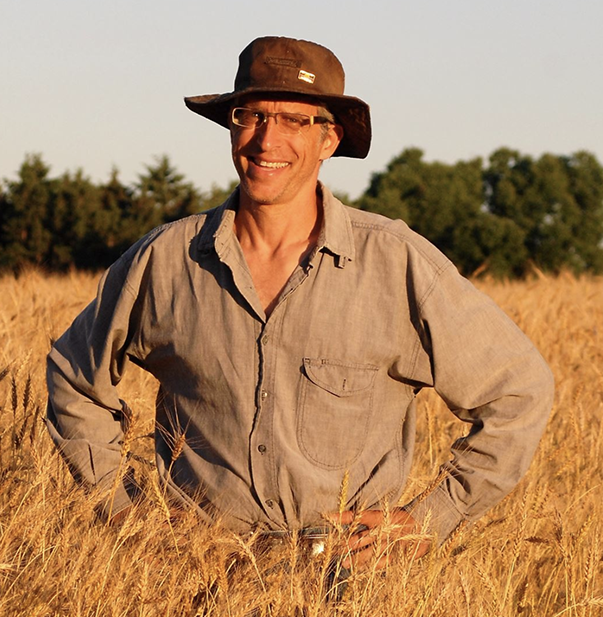 An alternative to the massed-produced whole grain products that are anything but fresh or local.

My attitude toward pancakes has long been: who needs them? The dough disks so adored by children and brunch enthusiasts feel leaden in my stomach and make me sleepier after I’ve eaten them than I was when I first woke up. Pancakes are a delivery system for all the things I try to eat in moderation: refined white flour, saturated fat, and sugar in the form of rivers of syrup.

Nevertheless, when a food-smart friend flagged Modern General as a can’t-miss place to eat in Sante Fe, New Mexico, I had breakfast there. The menu is about half pancakes, only here they’re called “Modcakes.” Both sweet and savory flavor profiles are represented. On my first visit, I ordered the green chile cilantro corncakes because it seemed like the most New Mexico thing. Also, it came with an egg, and I figured if I didn’t love the Modcake, I’d still have something for breakfast.

At first bite, it was clear this was like no other pancake I’d had before. Its texture was substantial yet delicate, and the corn flavor big and vivid, more like an ear of corn than cornbread. I felt satisfied and energetic after eating these cakes. Even the sweet ones–with lemon curd and blueberries or coconut and buttercream–didn’t cause the usual blood sugar crest and crash. I fit in a second breakfast at Modern General during my short visit, trying the teff and white Sonora wheat “plain cakes.” In this unadorned state, I liked these pancakes even more.

What was going on here? If you give the menu more than a scan, you’ll see these pancakes are made from freshly milled whole grains. Modern General takes a stand against what its website calls “modern processed foods–including hybridized, commercially milled white flour.” It goes on to explain that fresh, stoneground flour contains a certain health-fostering “life force.” Clearly, it’s hard to quantify the life force of any given foodstuff but having eaten plenty of Modcakes now, I have to say, based on my experience, these claims check out.

Soon after my trip, I interviewed wheat farmer Charlie Tennessen (above) to learn more about heritage varieties of wheat and the value of freshly milled flour. “One of the most interesting things about whole grain flour is that it goes stale quite quickly. Ninety-nine percent of people are eating stale flour without knowing it,” he says.

Tennessen actually came to wheat farming via the kitchen. As a lifelong avid home baker, he started using local wheat he milled at home back in his teens. The flavor difference was so marked, he never went back to commercial bagged flour and started his farm, Anarchy Acres in Wisconsin, to grow his own ingredients.

The trouble with white flour

Though white flour doesn’t go rancid the way whole wheat flour does, there are other reasons to choose something with more, shall we say, “life force” when you can.

Though we might not realize how stale our commercial whole wheat flour is, we all know it doesn’t taste very good. Rarely would we reach for anything other than refined white flour for those foods we eat just for pleasure, such as cookies and pastries. In bread and pizza recipes, we cut our whole wheat flour with white flour and add extra sugar to make it more palatable. But Modern General’s pancakes show us that whole grains can be both nutritious and pure pleasure–if the flour is ground fresh from high quality and, ideally, local grains.

It’s funny that even sticklers for local everything and picked-this-morning produce don’t consider the provenance or freshness of their flour. I certainly didn’t. But like everything else we use in the kitchen, flour has an origin story and it starts on a farm. Bags of flour are printed with a best-before date that few home cooks ever glance at. Freshness matters just as much in your baked goods and pasta as is it does in a seasonal salad. This is all too easy to overlook until you taste the difference.

Back at home in Philadelphia, I noticed a new presence at my farmers market: Pasta Lab. Clear plastic bags full of freshly extruded pasta shapes covered their table. The noodles were distinctly brown, made from whole grains including spelt and emmer. Pasta Lab co-owner Chris Wright told me the grains were purchased from Pennsylvania farmers. He and his partner Gina Rubinetti do the milling themselves shortly before making each batch.

Could this be the Modcakes of pasta?

Whole wheat pasta on another level

Yes. As it turns out, when you make a truly fresh whole grain pasta it bears little resemblance to the supermarket version I have been choosing over white flour pasta for health reasons. The Pasta Lab’s pasta, all of it 100 percent whole grain, has the supple bounce and smooth texture of fresh pasta made from refined flour, but only a million times more flavor. “Our customers tell us they just drizzle a bit of olive oil over it so the grains themselves shine through,” says Wright.

Wright makes his favorite pasta with emmer wheat. “It’s an ancient grain, one of the earliest cultivated kinds of wheat. To me, it has notes of hazelnuts and cinnamon,” he says. My own favorite of Wright’s pasta is made from spelt. These taste assertively nutty and toasty and have the perfect al dente bite. I prefer pesto applied with a light touch to these flavorful pastas instead of a bossier, brawnier red sauce.

Wright didn’t start out with pasta. A former catering professional, his pivot into cooking started with bread. “With sourdough, the flavors created by fermentation play a role. Pasta is an unfermented dough, it’s a very pure way to taste the grains,” he says.

Because the oils of whole grains degrade so quickly, the Pasta Lab flash freezes everything just after it’s made. “Anything made with whole grains needs to be in the refrigerator or freezer to preserve freshness, but you rarely see it that way in markets,” says Wright.

Since that first breakfast at Modern General, I’ve been eyeing countertop flour mills and mail-order sources for local whole grains. I haven’t made the investment yet, but I’ve made several other upgrades to my usual shopping list. First of all, I’ve traded in my supermarket whole wheat pasta for the version made by the Pasta Lab. At another previously overlooked farmers market stall, I found Morganics Family Farm selling their own organic rolled oats, another big everyday kind of upgrade. And I seek out bread from bakers who use the grains of the Mid-Atlantic in their loaves.

I’ll still stock whole wheat flour, but now I know to buy it from a local mill if at all possible and store it in the freezer so it doesn’t lose its flavor—or its life force.