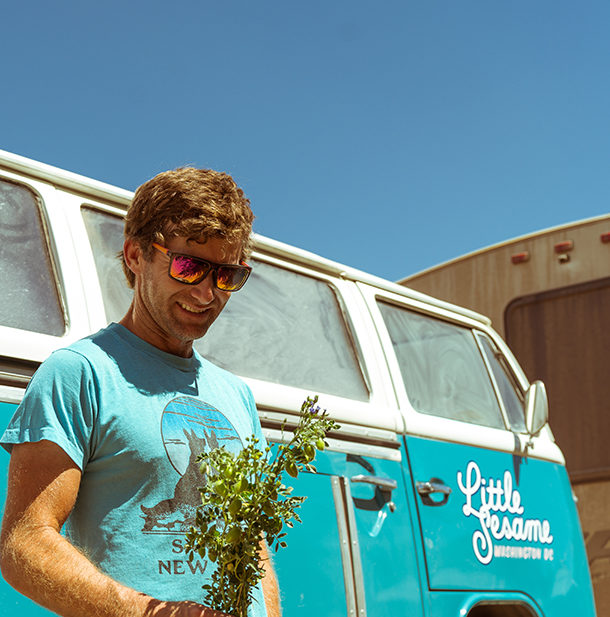 You are here: Home / Stories / From D.C. to Rural Montana

Little Sesame voyages to the source of their chickpeas.

In an alfalfa field just outside Fort Benton, Montana, a recently constructed barnwood table decorated with candles and with greenery from surrounding fields sits empty, but with place settings for 50. Each colorful menu is held down by a stone. The sun is setting a tangerine red. Purple thunderheads sweep the distant fields with rain.

Casey Bailey and the folks from both Little Sesame and Timeless Seeds have converged on this spot to celebrate. On deck for the celebration are a long-distance, a long-time friendship, a business partnership, and a shared vision of changing the way people farm and how people eat. Happily, they’re not celebrating alone.

The 50 spots at the table are for farmers and ranchers, local Fort Benton residents, friends and family.

Nick Wiseman and Ronen Tenne are the owner and chef from Little Sesame, a hummus restaurant in Washington D.C. They source all the chickpeas the restaurant needs from Casey Bailey’s farm, which is the first stop on their 2019 summer road trip. They are here to cook a meal of thanks for Bailey and his community.

Bailey has provided the field and Little Sesame the food. Yet no dinner would be complete without a drink. Timeless Seeds has brought a keg of Jeremiah Johnson Brewing Company’s Lentil Ale, as well as a 32-year-old vision of changing the face of agriculture in the Northern Great Plains.

The day prior, Wiseman, Tenne, and their crew were all over Livingston and Bozeman, collecting ingredients from farmers markets and co-ops, even buying food out of a Hutterite farmer’s trunk. They travel with some spice blends and sauces, but shop along the way, buying as many local ingredients as they can.

Neither Wiseman nor Tenne has been to Bailey’s farm before. Last year, the two of them took a road trip down to Charleston in their bright blue ‘78 Volkswagen van. This summer, they have 5 other crew members, plus an RV.

“I’m excited for the whole team to see how our chickpeas are grown, and for them to see the value of what Casey is doing,” Wiseman says. “Casey and Timeless and all these growers are changing the whole landscape and it’s such a cool thing for us to be a part of.”

With their road trip, Wiseman and Tenne hope to show communities that they care enough to venture from D.C. and see where their food is grown. That they are walking their talk. In turn, they hope to create communities of eaters that care about the impact that their food choices have on the planet.

In D.C. they put on a lot of events, including roving dinners that pull people outside of the city and tell the story of their food in a meaningful way.

“You’re coming and eating this bowl of food we are making, it’s coming from this farm in Montana that’s actively fighting climate change by growing nitrogen fixers,” says Wiseman. “You have a deeper connection to [that story] because you’re not just being told it, or it’s pasted to the wall, but you’re experiencing it in a way that’s deeply satisfying, and hopefully enduring.”  ]

The Little Sesame spirit is riding high, and it’s infectious.

“We live in a very stressful society,” Tenne says. “We’re trying to step out of our ordinary little bit, and be authentic to what we love, have fun, and create a better product and a better community because we’re doing it that way.”

For Wiseman, food and travel create a powerful tool to have harder conversations with people.

“Giving ourselves time to learn on the road, sit down, share meals, and have these conversations, to me, is the best path forward for us,” Wiseman says. “It’s such a cool forum to understand the world around us, and if we open ourselves up to creating a shared value system and move forward as a bigger community with a clarity of vision.”

Tenne agrees, and for him, the dinner on Bailey’s farm is representative of this vision.

“When you touch a person you touch a community, and, until you meet the person, cook dinner for them, or go for a drink, it’s never fully connected in my opinion,” he says. “What is the community like? Who are the people? It will be super cool to meet them.” 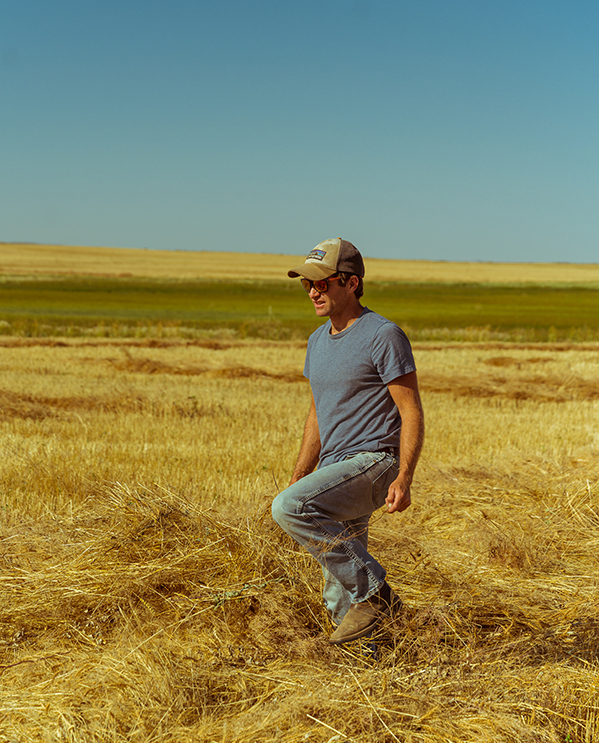 A return to roots

A musician. An artist. A religious studies and philosophy major. Funny how someone who is so influential as a farmer doesn’t label himself as one, and he doesn’t really need to, though he’s been featured as such by National Geographic and NPR.

Standing on one of his farm’s roughly 5,000 acres in faded jeans, a t-shirt, Chacos, and a Patagonia hat, talking about diversifying monocultures and parts per million of nitrogen, it’s clear that Bailey is comfortable with this language and place.

“If you grow alfalfa and take it out, and grow crops beyond, [the soil] will benefit for decades from the alfalfa, ensuring that soil for generations,” Bailey says, citing Dr. Clapperton, a soil scientist out of Saskatchewan. “Alfalfa is the cornerstone of our rotation,” he continues. “Three to four years of alfalfa, then cool-season grass that has high protein and great yield, then chickpeas, lentils…”

He grew up on this farm. His dad, Bob Bailey, farmed it conventionally, and then Bailey, who is now 39, has been converting it to a certified organic farm.

“I have barley, peas, flax, red clover, and yellow sweet clover all in the same fields,” Bailey says. “I don’t think I have a crop on the farm by itself.”

Bailey says that the best part about his relationship with Little Sesame is that it’s mutually beneficial.

Little Sesame supports what Bailey does, which makes their relationship special.

“One thing that I’ve realized is that companies are dying to take the stories we have right here, and they want to sell them,” Bailey says. “Because in industrial agriculture, food has become a commodity with zero connection with people.”

Commodity agriculture is how most of agriculture works. Food is mass-produced, it all gets mixed, and no one can trace where the food comes from. Foods like corn, oil, wheat, and soybeans are sold on the futures market where farmers can sell products they don’t own yet, and computers, lightning-fast, decipher the data and generate buying and selling orders.

“That’s when it becomes culturally a challenge: We want to sell a healthy product to you that’s not on the commodity market, and be a real community around that,” Bailey says. “It challenges that system. But I grew up in that [system], and it influences how all of us live, whether we like it or not.”

The initial roadblocks for Bailey and Little Sesame are processing and transporting the chickpeas. Another major roadblock to success is trusting each other, which many farmers might not do.

“It has taken me probably 10 to 15 years of being part of this organic community to say ‘wait I can shed that distrust and we’re all in it together.’ You kind of breakthrough those layers of commodity agriculture, and start trusting each other a little bit,” Bailey says. “And Timeless Seeds helped.” 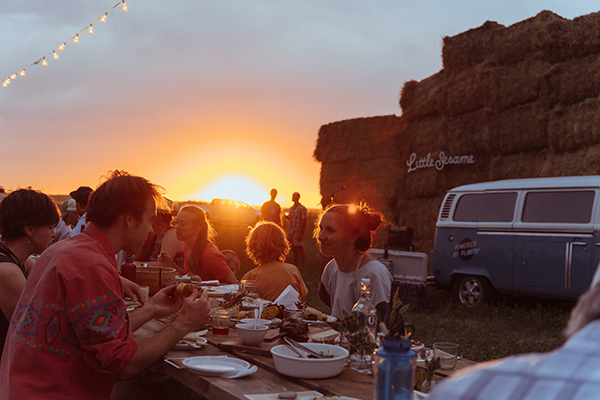 Putting a face to food

David Oien and Jim Barngrover are two of the original four Timeless Seeds founders. As young farmers who returned to family farms over 30 years ago, they converted their farms to certified organic and then found market opportunities for crops that would increase biodiversity and soil-building.

“The four of us didn’t come together to form a business,” Oien says. “But we discovered that there wasn’t the infrastructure to get farm products to the market. That’s what Timeless has been about: Bringing other farms into that community through market connections.”

Bailey has one of those farms. And, according to Barngrover and Oien, Bailey is one of the most innovative people Timeless works with.

“Casey is the epitome of sustainable agriculture,” Oien says. “He’s not only about the crops or making money or building soil health, but about building community.”

Though as Oien points out, the marketplace has grown to accommodate their vision.

“Thirty years ago there were fewer than maybe five people in all of Montana growing lentils. Now there are thousands,” Oien says.

Another big player, Patagonia, features Timeless products in their new line, Patagonia Provisions. According to Oien, Patagonia’s founder Yvon Chouinard realized that his company might have a bigger impact on saving the planet in food than in apparel.

“Food is a lot more effective,” Oien says. “It’s how we sequester carbon in the soil, how we support family farms, and how we put nutritious food on people’s plates.”

More and more, people want to know where their food is sourced, and Timeless Seeds offers customers a traceable product.

A lot of people may not realize the reach that farmers like Bailey have. His produce is in major cities and hundreds of small communities, in white-tablecloth restaurants and farm-to-table restaurants. It’s starting to have an impact, and Little Sesame is an example of that reach.

“[Little Sesame] is so proud of having Casey as their supplier,” Oien says. “And they’re not just selling hummus, they’re selling what Casey is doing.”

In the best of worlds, that is what Timeless Seeds envisions for the food system: Restaurants knowing their food suppliers and connecting customers to those suppliers.

“It’s a premium quality product, but also, it’s a story with people behind it and it’s authentic,” Oien says. “It’s not a commodity, so [people] pay premium prices because they know we are paying Casey a premium price to keep him on the land.”

Back on Bailey’s farm, the guests are greeted in the field by singing. Music artist Izaak Opatz is there, playing guitar next to the blue ‘78 VW van. On the other side of a stack of hay bales, a pop-up tent has smoke drifting out of it, bringing the scent of herbs, roasted veggies, and grilled steaks to the guests’ noses.

The Little Sesame crew carries dishes brimming with colorful food to the table. Warm pita bread rests between the plates, begging to be eaten. But first, a few words of welcome.

“Each of you is very special to me and to the Little Sesame crew,” Bailey says. “This is beautiful and it’s great to be able to celebrate the food that we grow here.”

“This is an opportunity for us to connect these two worlds that seem so far apart,” says Wiseman. “We are deeply honored to be here and are super excited to see our relationship grow. The more we grow the more we talk.”

“You can’t make such a beautiful meal if you don’t have 50 people to come and eat the meal. Dig in!” Tenne finishes.

Into charred corn on the cob and Bailey’s grass-fed beef.

And of course, into the warm pita bread and hummus.

“We thought it would be great to do a beer with [Timeless Seed’s] Black Beluga Lentils, as few people are doing anything with lentils in the craft industry,” says Dane Tatch, lead brewer for JJBC.

After devouring these delights, people break off into groups or stay around the table, talking to new friends, sharing old stories, and telling jokes.

“It’s the culmination of what we’re trying to do when we’re telling a story about food,” Bailey says. “I’m so impressed that [Little Sesame] came to rural Montana.”

It can be difficult to connect the dots between our food choices and their environmental impacts, but restaurants such as Little Sesame, companies such as Timeless Seeds, and farmers such as Bailey are making that connection more tangible.

“What a wonderful event,” says Oien. “Washington D.C. cares about Fort Benton, Montana. This is the future of food.”