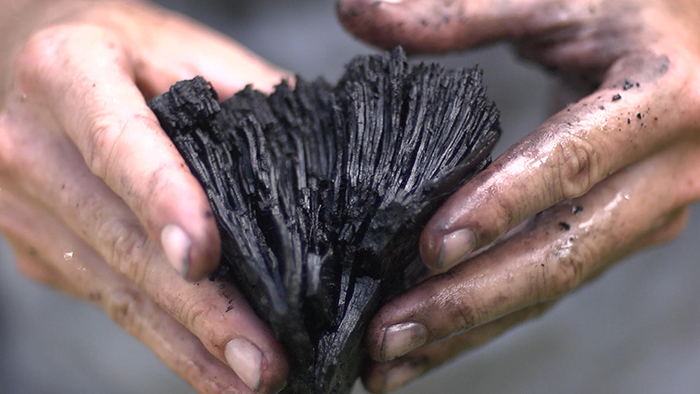 Filmmaker Marcelina Cravat reveals the regenerative magic of biochar in her new documentary.

Back in 2013, the environmental concern most Northern Californians were losing sleep over was the drought. Our more recent pattern of frequent firestorms had not settled in or signaled its frightening potential, and Elizabeth Kolbert’s book, The Sixth Extinction, was not yet standing hairs on end. It was still possible to imagine that the big changes predicted to be on the way in a climate crisis were a long while off, giving technology plenty of time to spawn some nifty solutions.

At that time, Berkeley-based filmmaker Marcelina Cravat was working to finish Angel Azul, her award-winning documentary that follows artist Jason deCaires Taylor as he creates a mystical ocean-floor art installation of human forms cast in concrete. Taylor designed his sculptures to work like “reef balls,” a relatively simple technology for propagating coral in reef restoration areas or for creating living reef-like environments for divers to explore. 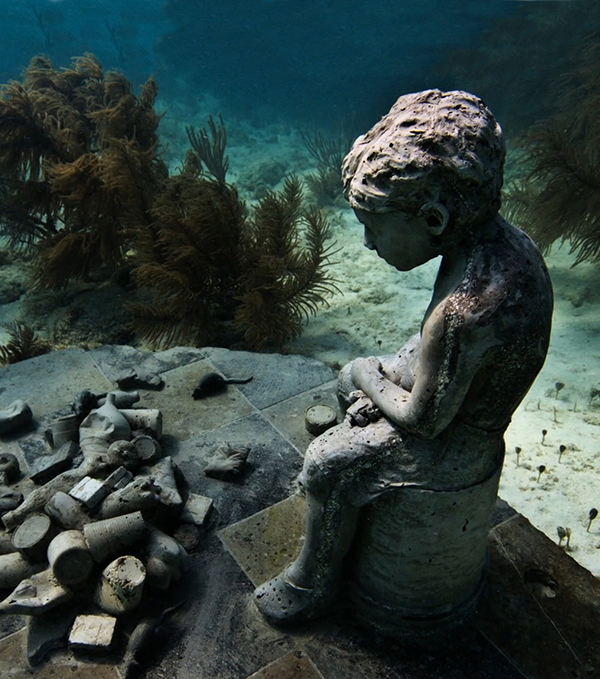 “Inheritance” is among the sculptures seen in Angel Azul, a film that follows artist Jason deCaires Taylor as he creates mystical ocean-floor art installations designed to encourage growth of coral.

“Midway through filming we observed the coral on the statues dying,” says Cravat in a recent interview. “We were soon to learn of the disastrous pollution problem in the Yucatán and brought in scientists to help us make sense of what was going on. Our art film instantly turned into an environmental documentary.”

Among the scientists Cravat’s team engaged was Dr. Tom Goreau, a marine biologist with a lifelong devotion to protecting and restoring coral reefs. During their final interview, Goreau expressed his alarm over the growing load of carbon in the atmosphere.

“I asked him if there was some kind of machine that could suck the carbon out of the air, sort of like a vacuum, and he responded, ‘We have the perfect machine . . . and it’s called … a tree.’”

That conversation didn’t make the final cut for Angel Azul, nor did Goreau’s mention of a promising ecological regenerative strategy using a substance called biochar, a word Cravat says she was then unfamiliar with. “I asked him if we could revisit this at a later time when I had more brain space to really process what he was saying,” she says.

The revisit occurred not too long after, as Angel Azul was earning its many laurels. “One door after another began to open,” Cravat says of the path that led to her 2018 documentary, Dirt Rich. “One expert after another made introductions for me, and our team managed to get a front-row seat to some of the most exciting things going on around these [regenerative] strategies.” 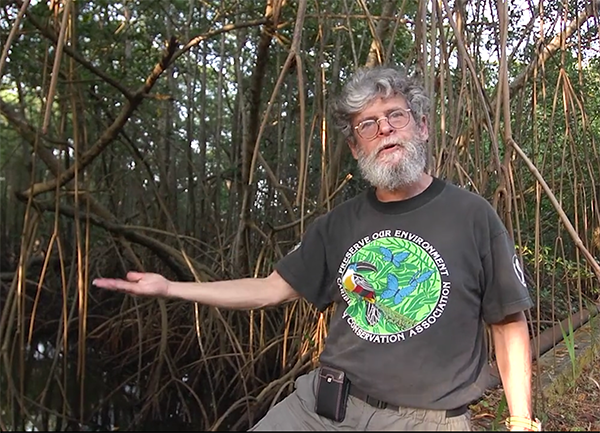 Trees—along with dirt, rocks, beavers, prairie dogs, wetlands, fungi, and microorganisms—are the heroes and teachers in Dirt Rich, throughout which Cravat’s human experts tell the interwoven story of how healthy ecosystems function. In Western-state wetlands, we watch beavers building and rebuilding their woody architecture as we learn about how wetlands work to store half the world’s carbon in their boggy depths. Dr. Goreau takes us to a mangrove (coastal intertidal forest) to provide such impressive details as these: “Mangrove swamps can be up to half carbon. They can be almost pure organic matter. You’re talking about 1% of the ocean area or so, roughly that, but it’s storing about half the carbon. So these are enormously rich ecosystems. The problem is they’re regarded as wasteland, breeding grounds for mosquitoes.” And when they are destroyed by industries implementing what are often poorly researched agri/aquacultural uses, they release that carbon back into the atmosphere.

Cravat’s team also traveled to Borneo to visit environmental scientist Willie Smits, founder of the Masarang Foundation, and well known for his work saving orangutans. Cravat describes her time with him as a once-in-a-lifetime experience. “We tagged along with him, watching him tackle a myriad of problems, and all of them involving the use of regenerative strategies. His love for orangutans is palpable. He literally learned regenerative strategies to ensure their protection by regrowing their forests the way that nature intended, in multistory polycultures.” Among Smits’s endeavors is a community-based sugar palm plantation that restores the ecosystem while creating good local jobs. He contrasts that with the destruction being wrought in his region by the industrial palm oil industry, which keeps expanding with no effective understanding of how the ecosystem works.

Dirt Rich emphasizes the importance of widespread education as a necessary precursor to solving the climate crisis. At Finca Luna Nueva, a lush living classroom in Costa Rica where guests come for study-vacations in regenerative agriculture, Dr. Goreau discusses soil, which he calls “the most complicated medium in the world … more complicated than the atmosphere, more complicated than the oceans. … There’s no more complicated system, chemically, physically, and biologically. It is very severely mis-studied or misunderstood because essentially what research has done has focused on industrial agriculture more than understanding how the ecosystem works.”

The applications of regenerative agricultural practices rely on deep understanding to produce food in ways that manage and bolster the soil’s complex working structure of organic matter and microorganisms. By contrast, industrial agricultural techniques, which involve deep tilling, monocropping, and overuse of external inputs like chemical fertilizers, pesticides, and fungicides, diminish the soil’s natural ability to draw atmospheric carbon back down into the earth. According to United Nations data, if we continue to try to feed the world by degenerative industrial agriculture practices, we may have as few as 60 harvests left. 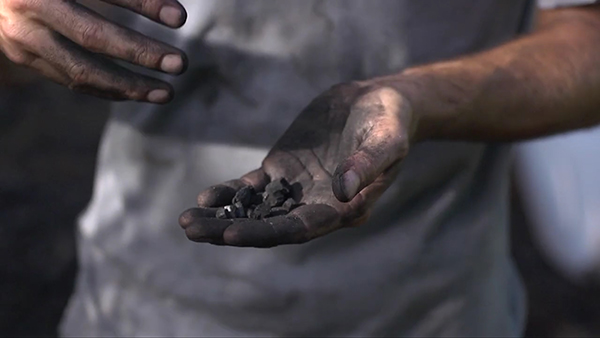 In Dirt Rich, a handful of biochar symbolizes a carbon-negative regenerative strategy currently in the hands of those involved in gardening and agriculture. Photo courtesy of Passelande Pictures.

The promise of biochar

The signature image in Dirt Rich is a pair of hands breaking apart a chunk of burned wood. Known as biochar, this bit of charcoal came out of a mechanized process for burning woody waste matter (such as wood chips from dead trees, lumber waste, nutshells, and rice hulls). The process captures nearly the entirety of the burn emissions for use as energy.

Bob Wells, owner and chief designer at New England Biochar, says, “What we’re doing isn’t really a fire, it’s pyrolysis. We’re cooking without the oxygen. By cooking the wood we’re getting the gas out of it, and we take that gas off to where we can control it and add oxygen and burn it and burn it clean. But when you do that, it leaves behind all of the solid carbon. That’s the char.”

Biochar on its own has little value, but when mixed into compost, it bumps up the effectiveness of the compost as it returns the now-concentrated carbon of that feedstock biomass to the ground and simultaneously spikes the growth of plants the mixture is fed to. More plant growth means more photosynthesis, which means more carbon “vacuumed” out of the air.

In the film’s lush opening sequences, we meet Josiah Hunt, who started his biochar experimentations in deep pits dug into the ground at his farm on Hawai’i’s Big Island. As the founder of Pacific Biochar, he now runs one of an expanding group of companies designing, improving, and marketing the “retort” kilns that produce biochar along with clean energy. We follow Hunt to several sites with ready waste streams of biomass that could feed into onsite retort kilns and produce the cycle of benefits he describes at a California rice field:

“You know you harvest rice and you get the rice grains and you separate the hull from the grain and you end up with rice hull. Then you utilize that rice hull in the same processing facility to produce heat to dry the rice.”

When that same biochar is co-composted on-site, it nourishes the rice field soil. And ready for one more bit of magic? Biochar, when properly made, is hydrophilic, which means it helps the soil retain water. That can make all the difference in a California rice field during times of drought.

Dirt Rich closes with several thoughts on our opportunities, many very near at hand, to understand the wisdom with which nature manages itself. “Though the problems of the world are increasingly complex, the solutions remain embarrassingly simple. Will we acknowledge, before the opportunity passes, that our choices matter because everything, on this planet, connects?” ´

Visit dirtrichthemovie.com to learn more about the films and Cravat’s production company, Passelande Pictures. There you will find Vimeo links for Dirt Rich and Angel Azul, plus a list of screening events currently in the works.

*This story comes to us from Edible East Bay.