You are here: Home / Stories / Cuban Sin Carne in Philadelphia 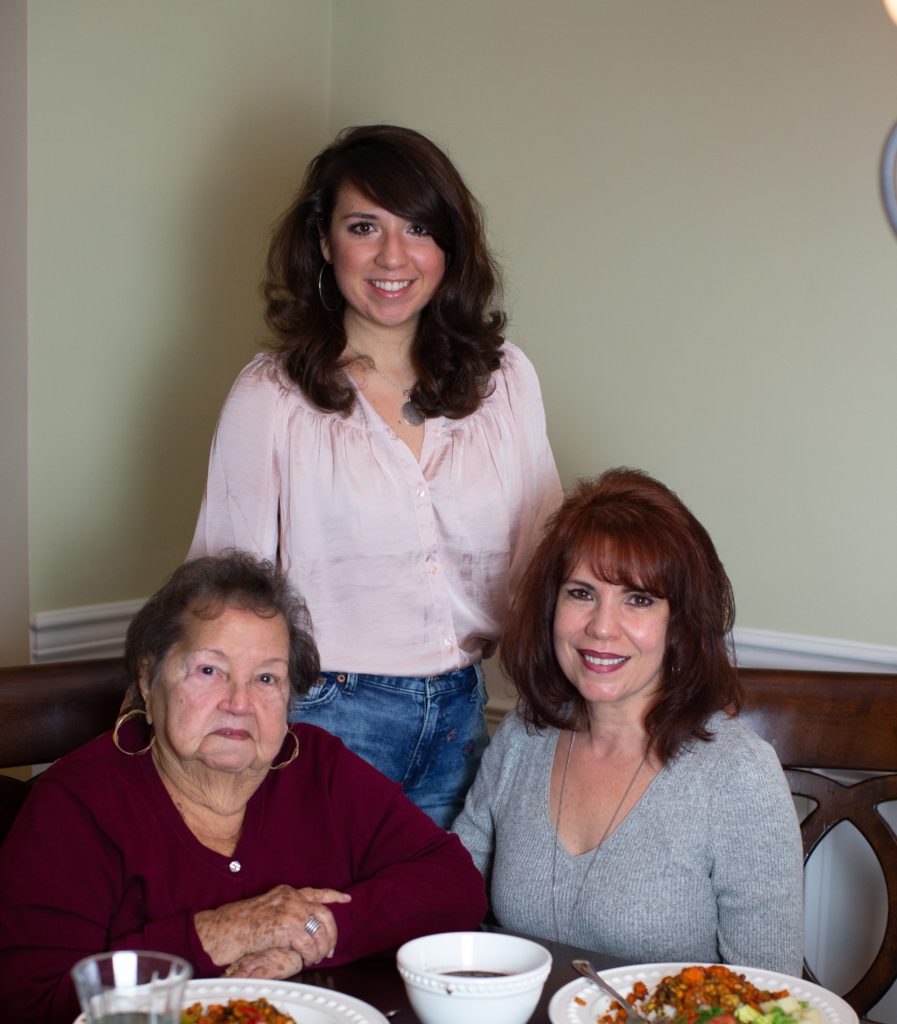 The author with her mother and grandmother. Photo by Gabriel Barrantes

When the reasons behind a plant-based lifestyle were lost in translation, enlightenment came through cooking

“What did you eat for dinner?”

It’s the first question my 90-year-old grandmother asks me every time I call her. “To-FU,” I say, figuring maybe if it sounds Spanish, she’ll recognize the word.

“Fufu?” She asks. No. That would be the delectable dish of green plantains, garlic, olive oil and salt and pepper.

“Esstuffing?” She tries again. No. That is her very Cuban way of pronouncing “stuffing,” as in the American dish traditionally served at Thanksgiving.

The holiday is a sensitive subject between us.

It was at Thanksgiving of 2006 that I announced I would not be eating the turkey. When I said the words, it was like a record-scratch moment from a movie. My aunts, uncles, cousins, second cousins, third cousins stared at me, forks and knives poised above their plates filled with turkey and trimmings, plus roast pork, yucca, black beans and rice. A culinary demonstration of our family’s heritage.

My grandmother, Clarivel Lorenzo, the 4-foot-10 feisty matriarch of the family, threw her head back, raised her hand to her forehead and moaned, “Who is making you do this to yourself?”

To understand my grandmother, you have to know where she came from and how she arrived in America more than 50 years ago. She lived in Manzanillo, a bay town on the southeast side of Cuba. Her memories of her life there revolve around family, music, and food. It’s where she met and married my grandfather, Laurentino Lorenzo, and where they started their family.

When Castro seized power in Cuba in 1959, establishing his dictatorship, he slowly stripped away the freedoms of the Cuban people. They lost not only their freedom of speech but also freedom around food, another important form of communication. Under Castro, the government rationed out ingredients in minuscule amounts.

To my grandparents, losing those freedoms was a loss of country, and America held all the liberties that were being taken from them. Their story involves a lottery system that permitted my grandmother to leave Cuba with her two daughters, my mother, Sandra, and my aunt Libia. It also involves a plan devised by my grandfather to help their son, my uncle José, who at the time was eligible to be drafted into Castro’s army, escape from the island. It took them five years to reunite in America and start new lives together in Philadelphia.

They risked everything to live in this country, and here I was refusing turkey.

My grandmother’s cooking is her own love language. She maneuvers quickly in a kitchen, grabbing spice jars to dash into dishes and oil to pour. Her intuition replaces recipe cards. This is why her bocaditos (deviled ham pâté) on soft white bread cannot be recreated.

Every moment of my mom’s childhood is associated with food. On her birthdays, sweet merenguitos (meringue cookies) were always served alongside a homemade vanilla cake with sweet guava filling. On road trips that began in the early hours of the day, my grandmother packed giant Thermoses of cafe con leche (espresso with milk) and generous squares of pastel del pollo (shredded chicken pie) that my mom would happily devour while fighting for elbow room in the backseat of a red Ford Torino with her siblings. Sunday dinners were always spent at home, where my grandma would make a pot of arroz con pollo (chicken with rice) big enough to serve the whole neighborhood.

These family Sunday dinners are a part of my childhood memories as well. I remember crawling into my grandpop’s lap to wait until the food was ready. I remember tearing into a big loaf of Cuban bread, tender and enriched with lard, to dip into chicken soup with a slick of oil pooling on top. When my grandmother babysat my younger brother Danny and me, her version of an after-school snack was a piece of fried skirt steak with fries.

You might be thinking of someone right now, an in-law or grandmother or aunt or father or sibling who loves you so much, they’d never let you go hungry. The tricky part ensues when you need to diplomatically shun their generations-old recipes to protect your health or to uphold your personal morals around food.

I remember going to my friend’s engagement party. As I arrived at her Vietnamese in-laws’ house, she quickly took me aside to give me a pep talk that went something like: My mother-in-law is going to give you a plate with a lot of food you don’t eat. Just accept it and we will swap it with the one I have made for you.

I entered the dining room, which was filled with people and platters upon platters of food on long, fold-up tables, and comically, said mother-in-law bee-lined over, noticing a new face and, more importantly, empty hands. She and I did not speak the same language, so she was welcoming me to her home and the family by way of grilled meats, seafood skewers, stuffed dumplings, and crunchy mango-cabbage salad. I accepted it graciously, as I had been instructed, and felt the warmth of human connection.

My decision to become a vegan was not a mere act of rebellion; it was a result of watching a series of disturbing videos that depicted the horrors of factory farming. I learned quickly that my Cuban relatives did not share my same empathy for animals. “You know, I heard carrots scream when they’re being pulled out of the ground,” my uncle told me, cracking himself up. They couldn’t understand my moral position, because all they heard was deprivation. So when my words failed me, I knew there was only one thing left to do—cook.

The key to vegan cooking is knowing your substitutions. My mom says that most Cuban dishes begin with bell peppers, onions, and garlic, otherwise known as sofrito, the holy trinity of sabor (flavor). I used these ingredients as a base for picadillo, a dish my grandmother has made me many times before. It is traditionally made with ground pork or beef. In my version, I replaced the meat with lentils, crumbled tempeh, and roasted sweet potato, building layers of textures and flavors with sweet raisins, toasted pine nuts, and briny manzanilla olives. I discovered that it’s the bay leaves and cumin that are essential to Cuban black bean soup, not the ham hock. Harina de coco, a sweet coconut pudding made with sugar and whole milk, turned out just as creamy using full-fat coconut milk.

But could my plant-based picadillo impress my grandmother? Recently, I worked up the courage to put it to the test. I offered to make dinner at my mom’s house and cook for my grandmother for a change. I held my breath when she raised her fork up to her mouth, pausing to eye the mixture before taking the bite.

“¿Esto no tiene carne?” she asked, suspicious that the dish had no meat.

I shook my head.

When words are lost in translations, the meaning of an empty plate comes in loud and clear.

Make your own vegan Cuban dinner:

*This story was originally published in Edible Philly—where you can read an interview with the writer, Jessica Lopez, here.