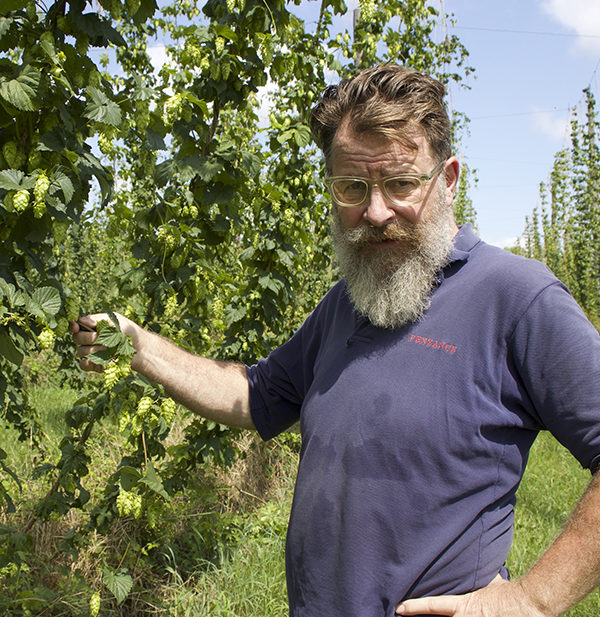 Ancient heritage is made modern.

Most people think of hops as a bittering and aromatic ingredient in beer, but its original use was probably as a healing and preservative agent. Various sources document written evidence of hops for medicinal and other purposes at least by Roman times: Pliny the Elder (23-79 O.C.E.) describes hops as a curative for the liver. Later, Pepin III, the Short (c. 714-768), Frankish king and father of Charlemagne, bequeathed a hopyard to the Abbey of St. Denis, and a physician in present-day Iran, Yūḥannā ibn Masawayh (known as Mesuë, 777-857 O.C.E.), praised hops’ use against fever. The Benedictine Abbot Adalhard documented the use of hops in brewing beer and, in 822, wrote that hops (likely wild hops) constituted proper payment of the rental tax on tenant farmers at Corbie. Likewise, the Abbess Hildegard of Bingen (1098-1179) advocated the use of hops to preserve beverages and as a medicinal substance.

Hops, along with cannabis, are in the Cannabaceae family, order Rosales, containing roses and other flowering plants. Native to temperate climates and found worldwide, the hop plant (Humulus lupulus) typically reaches 15-20 feet, though it can grow up to 30 feet high, strung along wires and string, with about 2-3 feet between plants. An ornamental backyard trellis need only be a fraction of the total length of the plant, as hops can expand horizontally along fences, providing shade on a deck. These deciduous perennials re-emerge from the ground every spring.

The American hops industry began in the east then gradually moved west to escape problems like downy mildew (a microbial parasite that destroys leaf tissue), with a gap in production during Prohibition, according to James Preste, Research Farm Manager at the Connecticut Agricultural Experiment Station in Windsor. Currently, the world’s largest hops producers are located in Oregon and Washington State, which receive less annual rainfall than Connecticut, reducing the risk of downy mildew. Most national commercial brewers get their hops from the Pacific Northwest, with their recipes fine-tuned to the terroir of that region. This leaves Connecticut growers to seek a local market with smaller, craft breweries. 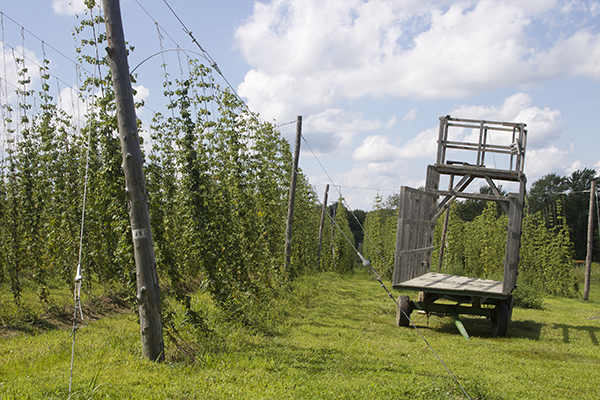 Although hops are native to Connecticut and have been used here for centuries, our fledgling hop industry is rather newly established, as our largest commercial growers, Smokedown Farm and Pioneer Hops of Connecticut planted their first hopyards only in 2015. For now, says Connecticut Department of Agriculture Inspector Mark Zotti, the expanding industry follows a voluntary “self-declaration model” for regulation and inspection. Still, Connecticut boasts 13 commercial hop growers, according to Alex DeFrancesco, President of the Connecticut Hop Growers Association, whose family expects to open its own Stewards of the Land Brewery in Northford this fall. DeFrancesco says that over 500 varieties of hops are grown across the country, and Connecticut raises over 40 of those, including two of the most popular: Cascade and Chinook. Notably, Pioneer Hop’s unique terroir has affected both of these. When Phil Markowski of Two Roads Brewing Company and David Wollner of Willimantic Brewing Company found that Pioneer Hops’ Cascade was fruitier and more floral than that of other regions (which are more citric) and that its Chinook also tasted fruitier and less piney than the traditional variety, Doug Weber of Pioneer Hops decided to trademark his varieties as CONNcade® and CONNnook®, respectively.

James Shepherd heads the largest hopyard in Connecticut, Smokedown Farm in Sharon, with over 9 acres devoted to hops and the capacity to support as many as 10,000 plants. The farm was founded in 2014 on roughly 170 acres and is a working farm, supporting several breeds of livestock, including hogs, chickens and “hair” sheep, bred for their meat, not their wool. Smokedown also boasts 65 acres of pasture and hayfields, plus 90 forested acres. The farm was named after one in England to which Shepherd’s mother was evacuated to safety as a child as war broke out in the late 1930s.

Currently, Smokedown grows seven varieties of hops for commercial use: Centennial, Chinook, Cascade, Santiam, Wye Challenger, Tahoma, and a new variety developed at the University of Oregon called Teamaker, which Harney and Sons (originally established in Salisbury, Connecticut) buys for some of its tea blends. Smokedown is also experimenting with other varieties of hops, such as a European variety, Vojvodina. According to Shepherd, “all hops have many aroma compounds and are balanced differently for flavors.”

Once the hops are harvested, they are dried in a kiln called an “oast,” sometimes put into bales, then finally transformed into pungent pellets in vacuum-packed bags to ship to brewers. With its new pelletizer, Smokedown is able to raise and fully prepare the hops for breweries, such as Athletic Brewing Company in Stratford. Through the Association of Connecticut Hop Producers, Smokedown works closely with Pioneer Hops of Connecticut in pelletizing, marketing, and selling its hops to roughly two dozen brewers.

Although we often associate hops with making beer, this extraordinary botanical may once again play an important role in our health, especially given that Smokedown’s James Shepherd, MD, PhD, is also a researcher and physician at Yale University. With a PhD from Imperial College of Medicine, University of London and an MD from Columbia University College of Physicians & Surgeons, he specializes in infectious diseases and has recently worked in Africa and Asia. Therefore, it should come as no surprise that he has a scientific interest in certain medicinal properties of hops. As he explains it, the Alpha acids in hops supply the bittering flavor, whereas the Beta acids supply the aroma and preservative action. The latter also have several important antibiotic compounds which combat bacteria in human disease. Shepherd hopes to develop these into potentially life-saving antibiotics. Hildegard of Bingen would have been proud.

*This story comes to us from Edible Nutmeg. Photography Anne Dropick.

What is Soul Food?