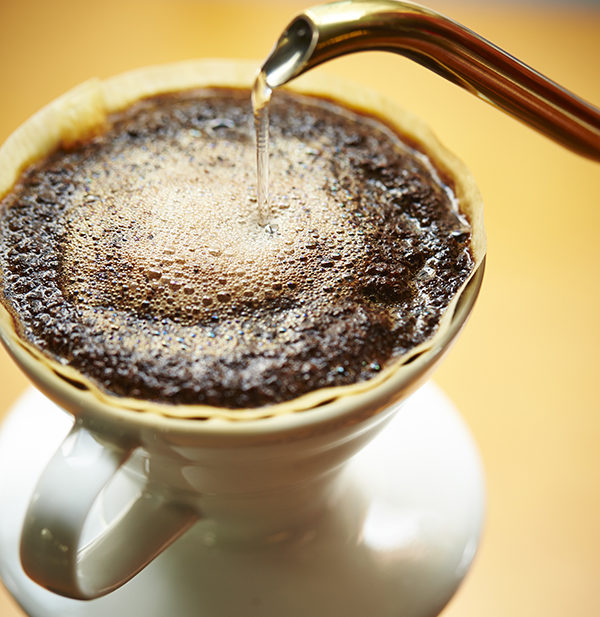 Even the most devoted farmers-market mavens and locavores tend to make an exception for their morning coffee. Some bold California growers, however, are trying to change that—despite a long-held assumption that coffee can grow only in the tropics and a long-ago history of failed coffee growing in the state.

Frinj Coffee—a SoCal network of coffee growers, named for its geographical position at the fringes of traditional cultivation areas—led by CEO and trailblazer Jay Ruskey, is setting its sights on the high-end specialty coffee market. And maybe it’s not such a wild idea. After all, subtropical or warm-weather imports like avocados, dates, almonds, and oranges have a long—and tremendously successful—track record in California’s warm climate and fertile soil.

Ruskey’s effort is quickly picking up steam, fueled by not only the recent ascendancy of upscale coffee, but also by the pressures on small farms in California, the effects of climate change on traditional growing regions, and advances in agricultural science. (Both Cal Poly and the University of California Davis, now have institutes for coffee cultivation.)

This nascent California coffee boom sprang from the fertile minds—and soil—of a now-retired county extension farm advisor, Mark Gaskell, who reached out to Ruskey, from whom Gaskell has long bought cherimoyas from at the farmers market, in 2001. Ruskey was eager to give coffee a try. And Ruskey’s family farm, Good Land Organics, was the perfect place to do so: located in Goleta, just outside Santa Barbara, the property overlooks the stunning central California coast—providing an ideal microclimate for specialty coffee.

That location, at sea level, might seem counterintuitive. In its native tropics, the best coffee is usually grown at higher elevations, where it ripens slowly and develops complex flavors. But Gaskell realized that it wasn’t the elevation per se, but rather the cooler temperatures of tropical uplands, that nurtured the best beans. California’s temperate, foggy coastal microclimates are cooled by the ocean in summer, and their breezes prevent hard freezes in winter. Ruskey’s property proved ideal for undertaking the experiment of growing coffee outside the tropics.

“In the heart of @goodlandorganics, you will see #coffee, #avocados, #passionfruit, and #dragonfruit all in one location,” says Jay. “As a whole, these crops are all sharing water, labor, and light while protecting each other from weather extremes such as sun, wind, and frost.” (via @bluebottle) http://bit.ly/bbcsustain #FarmingOnTheFrinj #OrganicallyGrown #Organic #OrganicCoffee #FarmCoffee #CoffeeFarm #Farming #Farm #Farmers #Agriculture #GoodLandOrganics #Ag #Sustainable #SustainableFarming #CACoffeeGrowers #CAGrownCoffee #SpecialtyCoffee

A history of failed attempts

Most coffee drinkers likely think of their morning cup as a strictly imported commodity. But perhaps surprisingly, Gaskell and Ruskey aren’t the first to have the idea of cultivating coffee in California, where several boosterish attempts sprang up after the Gold Rush petered out. Prices for high-quality coffee skyrocketed in the 1870s, especially in California, where importing coffee was expensive and unscrupulous grocers often sold adulterated and poor-quality coffee.

A number of would-be miners—among them the Folger brothers—had already discovered they could make more money selling coffee to keep the miners going than actually panning for gold. Meanwhile, enthusiasts noticed a native plant that resembled coffee in the Sierra Nevada foothills, where the mines had largely played out and enthused that it was wild coffee. (The plant, California buckthorn, was actually unrelated.)

Settlers hoped to cash in on both high worldwide prices and the California coffee shortage. Thinking that elevation—not temperature—was the key to growing coffee successfully, some farmers planted the crop in the central California counties of Tuolumne, Calaveras, El Dorado, and Amador, a region that experiences frequent frosts.

In the 1870s, farmers as far north as Butte County and as far south as Fallbrook, inland from San Diego, made attempts, none successful. A U.S. Department of Agriculture official offered the then-princely sum of $10 per pound as a bounty to any farmer who cultivated coffee outdoors in the United States. It was never claimed, but one optimistic cultivator, Charles Shinn of Alameda, wrote confidently in 1877: “No man now testing coffee considers its success other than a problem as yet unresolved.”

It would be well over a century before better-informed cultivators, led by Ruskey and Gaskell, would resolve it using more scientific farming methods—and their products are already fetching far more than the $10 of olden times.

Gaskell, who is also known for his instrumental role in introducing blueberries as a profitable California crop, worked for more than a dozen years in Latin America, where he consulted with high-end coffee growers in traditional growing regions. When he returned to California as a county farm advisor, however, he was focused on helping small farms remain viable in southern California.

Though he wasn’t initially thinking about coffee, many small farms—including Ruskey’s Good Land Organics—grew an array of subtropical fruits, such as cherimoyas, and part of Gaskell’s job was to help such farms diversify. The idea of trying coffee, long dismissed as an impossible crop to cultivate outside the tropics, came to Gaskell when he spotted a lush coffee bush covered with ripe cherries (the fruit that encloses the coffee bean) in Santa Barbara.

“I thought, these things can be pretty productive here, but I really didn’t consider it much as an alternative for California goes because in the areas where I’d worked, it had always been heavily dependent on relatively low-paid labor,” Gaskell says. Then, however, he visited coffee plantations in Kona, Hawaii—the only place in the U.S. that has historically grown coffee successfully. In Hawaii, land and labor are both in short supply, but Kona beans are a high-priced specialty crop, often grown on a cooperative model.

Gaskell brought some seed back from Ruskey started small—very small—in 2002. The early days were full of trial and error. Coffee doesn’t just require cultivation know-how; the processing is also labor intensive and critical to making a good-quality bean. Ruskey built a small mill; Gaskell brought a stripper, for processing the cherry, back in his luggage from a trip to Panama. Ruskey’s first roasting attempts took place in a cast-iron skillet on the stove—a process so smoky he never did it in the house again—and for many years he sold his beans at the Santa Barbara Farmers Market.

A coffee network is born

After a few years, Ruskey realized he could share his processing equipment, seedlings, and know-how with other farmers looking to diversify their crops. Out of that realization came Frinj, his network, which was incorporated in 2017. (The well-known California roaster Blue Bottle bought Frinj’s entire 250-pound release that year.)

“Jay had started a nursery and we started approaching farmers in the avocado belt,” says Frinj CMO Lindsey Mesta. “It’s symbiotic, in the same kind of microclimate that grows coffee well, and it was also an opportunity, because the [California] avocado industry is facing more and more challenges.” Not only is there price pressure from Mexico, but a whole generation of avocado growers needed to decide whether to reinvest by replacing or refreshing trees—or to branch out. Some, especially in San Diego County, have branched into coffee as growers for Frinj.

The network focuses on three major pillars of sustainability, says Mesta: the environmental impact, finances, and people, or labor. Frinj’s model tries to address these concerns in integrated ways: interplanting allows for less seasonal labor and thus more stable labor costs and employment. Good Land also pays pickers by the hour, rather than by the pound as is traditional in many regions, encouraging them to harvest the best beans rather than the most.

Frinj’s profit-sharing model takes a commission from member farms for processing and product, but the farmers get back 60 percent of the sale price. Water is always a challenge in drought-plagued California; Ruskey’s drip irrigation model applies small amounts directly to the trees, to save water. The network has grown to include more than two dozen farms, including Mraz Family Farms near San Diego, owned by singer-songwriter Jason Mraz.

The dynamics of farming in southern California were just one factor in Frinj’s growth. Ruskey’s passion for coffee cultivation grew at the same time as a worldwide boom in specialty coffee, which has driven up prices and given consumers a new focus on quality. At the same time, some traditional coffee growing regions have seen the effects of climate change, with both volatile weather and warming high-altitude areas making coffee production more challenging in tropical highlands. The temperate coastal region of southern California, cooled by the ocean, mimics the temperature range of highland coffee-growing regions, allowing for a long, slow ripening of the coffee cherry that enhances the finished bean’s flavor profile.

Recently, Frinj offered just 17 pounds of a variety called Cuicateco, which sold for $14 per ounce and earned a score of 92 from Coffee Review. Ruskey’s new crop of Caturra, roasted in May, offers a fruity yet rich aroma, balanced acidity, and a rounded flavor—a very satisfying cup. Frinj growers are also cultivating such varieties as Geisha, a Panamanian variety that once sold for more than $600 per pound.

It takes five years for coffee trees to become productive after planting, and Frinj’s goal, says Mesta, is to plant 100,000 to 200,000 trees per year over the next five years. That’s still a tiny fraction even of the only other US coffee-growing region, Hawaii’s Kona, much less world coffee production. But for an area that had no coffee plantings whatsoever 20 years ago, it’s impressive growth. Frinj’s total 2018 production was just 1000 pounds, about half of which was saved for seed and research. Mesta expects production to double in 2019, with more farms in the network coming online: “Next year we’re going to have coffee from almost half the farms, and the next will be almost two dozen farms,” says Mesta. “Five years from now we’re going to produce somewhere between 50 and 70,000 pounds of coffee. It’s going to just exponentially grow.”