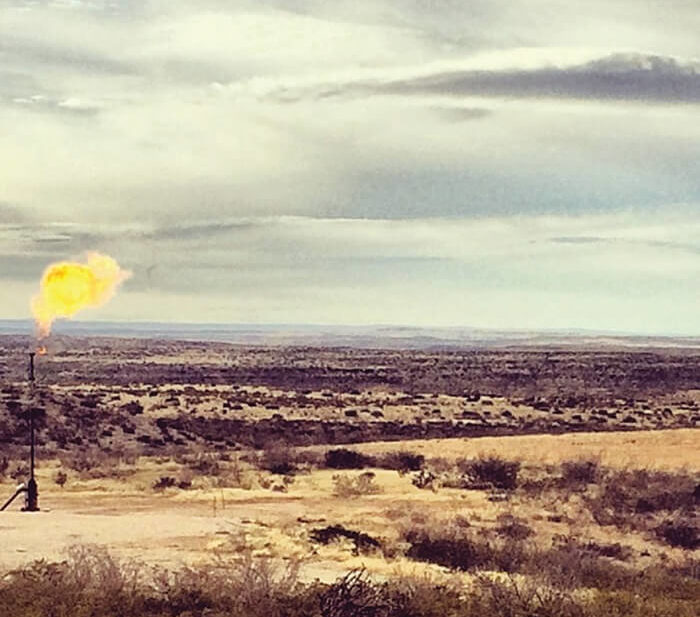 You are here: Home / Stories / Carlsbad’s Cattle Ranchers Get Fracked

The oil and gas boom puts a way of life in jeopardy.

A good family friend, Carlsbad insurance agent and financial adviser Boz Green, recently told me a joke that went something like this: A cattle rancher asked another cattle rancher what breeds of cattle he raised.

They say there’s a grain of truth in every joke, but it’s more like a boulder of truth in this one. The recent fracking boom in the Carlsbad area is changing its food production landscape and proving especially disruptive to ranching operations.

Hydraulic fracturing, commonly called fracking, is a method of extracting oil and natural gas which involves treating freshwater with chemicals and shooting it down a well using a pressurized system to release the oil and gas that have been resting between layers of shale under the earth’s surface. Oil companies have been fracking in and around Carlsbad for decades, but nobody paid much attention because technological limitations kept the activity in the area fairly contained.

However, recent innovations in fracking allow for horizontal drilling and have revolutionized the industry.  In addition to the new discovery of huge reserves of oil in the Permian Basin, which encompasses parts of southeastern New Mexico and west Texas, fracking has brought an enormous increase in oil and gas activity to Carlsbad. Fracked wells in the Permian Basin are said to have extracted more than two hundred million barrels of oil in 2018 (up from eighty-five million in 2011), and that number is projected to increase in the years to come.

All this oil and gas activity has arguably made Carlsbad, my hometown, a pretty miserable, although very lucrative, place to be. When I was growing up there in the 1980s and 1990s, the population hovered around twenty-eight thousand. It was the type of town where you’d see someone you knew everywhere you went, which meant that any misbehaving would usually get back to your parents by the time you got home. Every teenager, from the jocks to the goths, learned how to two-step because country dances were often the only thing to do on the weekends. My town had colorful characters, like the white middle-aged guy with a thick Midwestern accent who hosted the local hip-hop radio show. It was close-knit. It was quirky. It was humble. 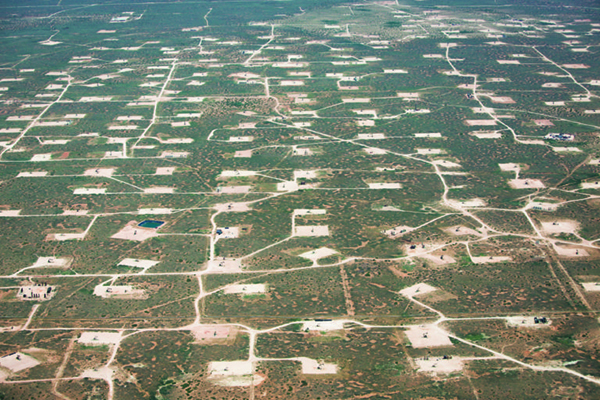 Aerial view of the ‘OIl Patch’ in Eddy County , part of the Permian Basin, revitalized by the fracking industry. Rumored to have more drilling pads then anywhere else in the country.

Now, the population is said to be between 70-80,000. “Man camps,” RV parks, and converted portable buildings housing hundreds of itinerant oil field workers have cropped up near where the local drive-in theater once operated. Lookalike tract homes are being slapped together on craggy desert parcels on the outskirts of town. Lines at Albertsons and Walmart have become so long that a friend told me she drives a half-hour to Artesia to buy groceries in order to avoid them. On the south side of town, traffic regularly backs up, as truck after truck makes its way to the oil fields. According to my family friends, you never see anyone you know when you’re out running errands anymore.

These surreal scenes are jarring enough, but juxtaposing them with the extreme economic changes that the industry has brought to southeast New Mexico makes them even more disturbing. Base rates for hotels are around $300 a night, and rent for an average two-bedroom apartment is typically more than $2,000 a month. The long and low mid-century homes on Riverside Drive, Carlsbad’s toniest street, are being demolished and replaced by 10,000-square-foot architectural monstrosities with giant front doors made from scrolled iron. Many local teens skip college, and some don’t bother to graduate high school, because even the lowest-level oil field jobs start at around $20 an hour. I recently saw a young man who couldn’t have been more than 23 driving a brand-new Corvette.

Garth Grizzle, a wonderfully named retiree of the Natural Resources Conservation Service, has a unique perspective on the region’s fracking boom. For the past eight years, he has worked for Richardson Cattle Company, a large-scale ranch that grazes its animals on 145,000 acres east and south of Carlsbad. Grizzle serves as Richardson’s liaison to the oil companies that are fracking on their grazing land.

Like most cattle ranching operations in New Mexico, the vast majority of the land Richardson leases for its cattle is owned by the Bureau of Land Management (BLM) or the State of New Mexico, meaning the company has no say on whether or not fracking companies can lease mineral rights where they run their cattle.

When fracking companies lease land for drilling, their footprint isn’t just the well itself. They must also build a road to access it, install power lines and pipelines, and construct holding tanks and large ponds to hold the fresh water waiting to be used in the fracking process, as well as the so-called produced water, the chemically-treated byproduct of the process. All this development kicks up dirt, creating soil erosion that damages the surrounding rangeland.

Grizzle said, “This is pretty marginal rangeland to start with, and with the drought situation we’ve been experiencing for the last five or six years or even longer, those numbers [of cattle] have to come down. So you’ve got the droughts to deal with and now all the oil field activity that’s come to the area. It’s going to make things really hard for the ranchers because we’re losing our carrying capacity hand over fist.” And decreasing carrying capacity means decreasing income for the business. “It’s got the ranchers down here pretty concerned because their livelihood is under fire,” Grizzle said. 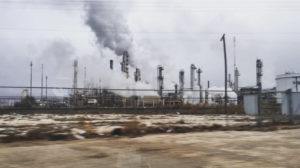 Lisa Ogden, a fifth-generation rancher and third-generation farmer in the area, said that her cattle ranching operation has decreased by about a third due to the influx of fracking wells on her grazing land. Danny Berry of Berry Ranch estimated that the effects on his ranch have been similar. Both have chosen to diversify to keep their businesses afloat.

In addition to the oil activity’s taking up rangeland and causing erosion, another concern of Grizzle’s is the amount of water fracking consumes. For every barrel of oil that is extracted, four to five barrels of water are used. Since 200 million barrels were extracted from the Permian Basin in 2018, that means almost a billion barrels of water from the area were consumed in the process. Grizzle said, “We’re limited on water anyway, and now we’re pumping it down the wells to frack with. . . . When you take this water out of the water cycle and put it down an oil well, that water is gone forever.”

Because of the chemicals used in fracking, the produced water it creates is considered a biohazard and is often disposed of in saltwater beds that lie 10-20,000 feet underground, removing it from the water cycle completely. Injecting the water into the saltwater disposal wells is expensive, however, so fracking companies are getting more creative with how they deal with produced water.

“Understand this: everyone tries to make water an emotional issue, and it’s not an emotional issue. It’s a money issue,” said Larry Gregory, another family friend, whose former company supplied the Carlsbad area oil fields with around 70% of the water used in fracking operations. He explained one new solution for produced water that has pleased environmentalists as well as oil executives. “Most of the oil companies are trying to re-frack with the same [produced] water. They take as many chemicals as they can out of it, and then they mix it with fresh water. The percentage is usually 50-50 produced to fresh water,” Gregory said. He added, “I think the technology will be such that in three more years, they won’t need to use any freshwater in fracks.”

Though supportive of efforts to reduce freshwater usage, Eleanor Bravo, Southwest director of Food and Water Watch, warned of other proposed uses for produced water, such as “the potential and probable use of produced water to irrigate crop fields, which is happening in California right now.” Last year, the leader of the New Mexico Department of Energy, Minerals, and Natural Resources announced proposals to use filtered produced water for farming and ranching and possibly even for drinking water. Bravo explained that though the water may be filtered, toxic chemicals, heavy metals, and even radioactive material still remain.

“Another problem,” she added, “is that, though these wells go below the water table, we do know that fracking fluid has leaked from many wells, and this has been proven in a number of places in the United States. This fluid could then pollute your groundwater and your aquifer, which would have a terrible effect on your crops, your rangelands, your livestock, and your drinking water.” 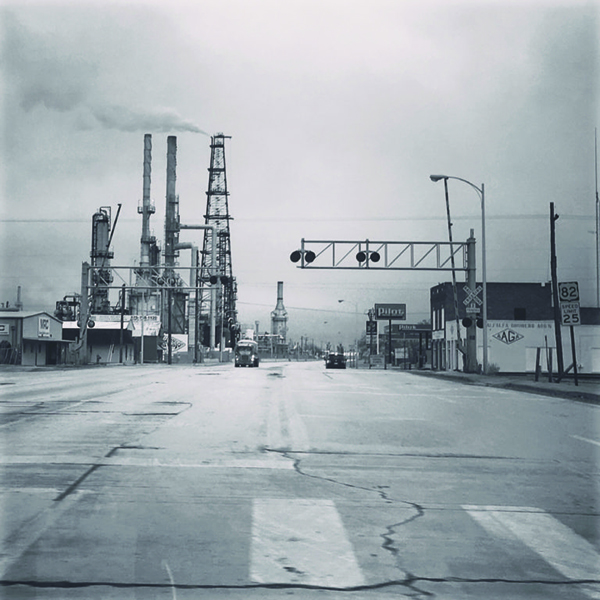 Ogden has seen firsthand what produced water can do to rangeland. “On the legacy locations [drilling sites from the 1970s to early 1990s] on our ranch, they had produced water ponds, and all they did was let them dry out and shove the dirt in. They didn’t have to haul off all the contaminated soil.” As for what those sites look like now, decades after the contamination, Ogden said, “It’s bare ground. You can’t grow anything. In some places, it’s not even just weeds. It’s nothing.”

Laws have been put in place to regulate the disposal of produced water, but spills and leakage in the fracking process still occur. They were reported seven hundred thirty-three times in 2018 in Eddy County alone (where Carlsbad is located), according to the New Mexico Oil Conservation Division. Though Gregory assures me that BLM inspectors are holding fracking operations accountable for spills and leaks, he admits that the state is understaffed.

Overall, it’s difficult to get an accurate picture of the effects of fracking in southeastern New Mexico because, like most controversial issues, it has become political. As much as they complain about the traffic, the huge increase in population and the high price of real estate, the majority of Carlsbad residents don’t want the Democratic-led state legislature to take any steps to curtail fracking in the region. It seemed paradoxical to me at first, that they would cling so hard to something so devastating to the community, the surrounding rangelands, and possibly the water supply, but the money the industry has brought to the town is difficult to resist. As to whether or not fracking in the region should be stopped, Garth Grizzle said, “There’s no easy answer, and whichever way it goes, somebody gets hurt.”

*This story was originally published in Edible New Mexico.