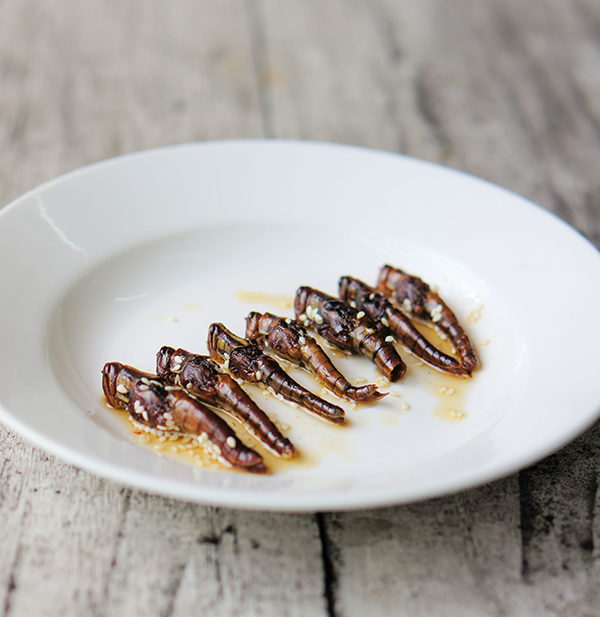 You are here: Home / Stories / Are You Gonna Eat That?

Though the mere idea makes some folks shiver, eating insects is nothing new.

People around the world have been consuming bugs for thousands of years. What is new is a global industry of insect farming and food products and a growing awareness of the potential health and environmental benefits of edible bugs.

“Education is important in this industry because there are a lot of prejudices and fear about eating bugs,” says Aly Moore, brand ambassador for the insect agriculture industry and actively involved its trade organization, the North American Coalition for Insect Agriculture.

Moore, a native of Simi Valley, says she has always been passionate about food policy and public health. Her first encounter with edible bugs came in an adventurous moment studying abroad in Mexico for her public health courses at Yale. She had her first taste of chapulines, or grasshoppers, seasoned Oaxacan-style in a taco. “I’ll try anything once,” she says. “And I loved it!”

When she returned to school after her trip, Moore hoped to find recipes and resources online to surprise her family that Thanksgiving with a new ingredient on the table, but found very little information. She was determined to find out more so she reached out directly to a few insect farmers, and their stories drew her in. As a passion project, she began sharing their stories through her blog at Bugible.com on nights and weekends.

As she learned more, she became a prominent voice for the industry, particularly in the United States, and almost a year ago Bugible became her full-time pursuit. She later launched EatBugEvents.com to reach a broader audience and provide opportunities for kids and adults to learn about edible bugs and to give them a try. She now speaks at schools and other organizations and also hosts dinners, wine pairings, cooking classes and more across Ventura County and well beyond.

Tasting bugs is a very personal aspect of awareness for the insect industry; another is seeing them as an everyday food rather than just as a novelty, exotic cuisine or emergency food.

“Edible insects have incredibly delicate and unique flavor profiles,” Moore says. She loves witnessing the first-time bug eater’s experience. “They realize that what they thought would be a scary experience was actually quite delicious.”

The U.N. Food and Agriculture Organization has registered more than 1,900 edible insect species, hundreds of which are already part of the diet of many countries. In its publication, Edible Insects: Future Prospects for Food and Feed Security (2013), it endorsed insects as a more sustainable and available source of protein than meat, which quickly broadened the conversation and sparked interest and opportunities in the insect industry.

“Choose any food enviro-metric comparison—gallons of water, CO2 equivalents of greenhouse gases, acres of land or feed-conversion-ratio—when it comes to sustainability, bugs always come out a winner,” says Moore.

Bugs are easier on the environment, and they also satisfy our demands for healthier food options; these are two strong selling points that have helped bring to market products such as Chirps Chips, BBQ Mealworms and a variety of pills, protein bars and energy boosts made with insects. According to a recent report by Global Market Insights, the global edible insects market is expected to reach $7.96 billion by 2030, with the fastest growth here in the U.S.

Insect food companies claim that bugs such as crickets provide twice the protein of beef (by weight), the nine essential amino acids, higher amounts of B vitamins and a perfect ratio of omega-3 to omega-6, all in a more bioavailable way than meat.

“Insects pack such a nutritional punch because we eat the whole bug and obtain nutrients from all parts of their body, such as their B12-filled exoskeletons,” says Moore. “And they are gluten-free and Paleo-friendly.”