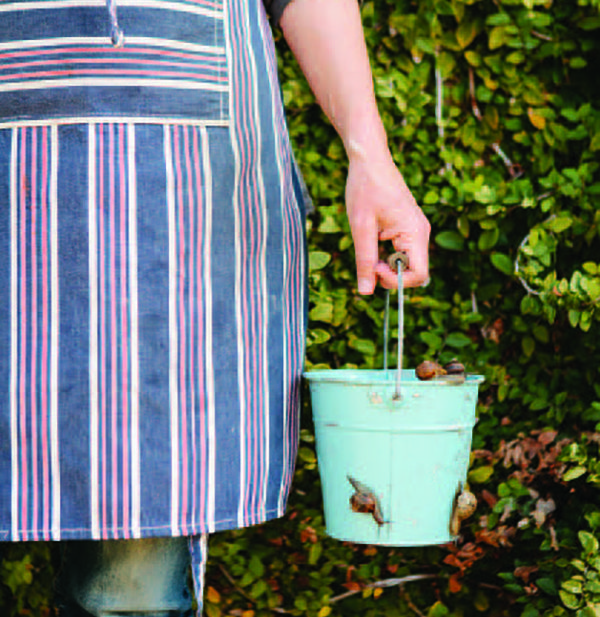 You are here: Home / Stories / A Snail’s Tale

Stalking the original slow food in a San Francisco garden.

As I stood over our kitchen sink scrubbing slime and bits of snail poo out of a plastic bucket I did not feel heroic. I did not sense the triumph of the urban forager feeding her family with found edibles. I had no swell of locavore pride in preparing tiny creatures plucked from my yard. I did not even give myself a pat on the back for being such a dedicated food writer.

Instead, I knew that despite my fears, I couldn’t be too bad of a mother if I was willing to purge snails for my son. Shortly after this last Christmas, my 9-year-old son and I were lucky enough to find ourselves walking past L’Escargot Montorgueil, an old Parisian restaurant with a giant bronze snail hanging over its awning. The previous day he had been stunned by the fact that a steak and fries is a widely available lunch option, and now he saw that snails were on offer. He can be an adventurous eater and our trip to Paris was bringing out the best in him.

It was morning, so the restaurant was closed. But when a friend and I planned the menu for our New Year’s Eve feast, I mentioned my son’s new-found fascination with escargots. Our friend’s French pride kicked into high gear and he insisted on buying the specimens himself. The day of the party, he handed me an aluminum tray with a stiff white paper lid bedecked with the Le Grandgousier sticker on top. These weren’t just snails, they were the best escargots from the snazziest traiteur on the Rue St-Honore. Inside were three dozen fat tan snail shells, each about two inches across and filled to the rim with bright green butter. We baked them in the oven for the recommended 15 minutes and brought them to the table already adorned with baguettes and a bottle of Montrachet.

As the other adults helped themselves to a few shells and sipped their wine, the snail buyer focused on my son, watching him pick up the first shell, dig around with a toothpick (for we had no designated two-pronged escargot forks), pull out a fat squiggle of gray meat dripping with seasoned butter, pop it in his mouth and chew. I’m not sure whose eyes lit up more brightly with delight when it became clear that the long-awaited taste of escargot lived up to so much expectation.

“Mom,” he said, “you should write a story about snails!”

Both the French and the Americans at the table laughed. No no, they all asserted, California garden snails aren’t the kind you eat.

But they are. They are exactly the kind (or, to be exact, one of the kinds) you eat. In fact, according to UC Davis, California has brown snails (Helix aspersa) because a Frenchman brought them to the Golden State in the 1850s in order to make escargots (we were actually tucking into Helix pomatia, the other snail species commonly eaten in France, which tend to be bigger and have distinctive tan shells). Heliciculture didn’t take off in the Golden State, but like so many others before and since, the mollusks loved it here.

In search of Helix aspersa

Once upon a time, our garden was full of snails. Big fat dudes who left slime trails across the concrete stairs and hid under deck chairs and along the sides of plant containers. I went on a crusade that consisted of leaving saucers of beer all over the place. The snails drank and the snails drowned. And they haven’t returned. It ends up that, like the French, raccoons are fond of eating snails. We definitely have raccoons—they dig up the ground cover under the gravel sections of the yard looking for treats and leave their scat on the cocoa shells I use to mulch the center garden plot. In short, I have no snails in my garden. This is, as most San Franciscans know, usually considered a good thing. It’s not, however, such a great thing if you’re writing a story about harvesting snails from your garden. Lucky for me, others are not so lucky, so one early March night I grabbed a flashlight and a large bucket and my son donned his camping headlamp and we headed out into the dark of a friend’s yard and garden that we had been promised was infested with snails.

Snails are largely nocturnal and like things damp and dreary. Thus, they really dig foggy San Francisco. They like to hang out on the underside of succulents and stalk-y or long-leafed plants. Since it was dark, we found plenty of them just crawling about on rocks and sidewalk edges. If you know there are snails in your garden, make things easy on yourself: Set up a board on some rocks or bricks or whatever will keep it a few inches off the ground over some soil in a shady part of your yard. Check it in the morning. Chances are there will be scads of snails clinging to the underside of the board.

At first, the snails we saw seemed way too small. Their shells were less than half the size of the snails we ate in France. Then, we started noticing how big the snails were outside their shells. The phrase “bite-size morsels” came to mind. We started picking them up and dropping them in the bucket. In quick order, we had five dozen snails to take home.

The tending of snails

We covered the bucket, set it in the corner of my study—a place that stays cool and dark—and threw in a few stalks of fennel. My son went to bed. I sat down to read but had to retreat upstairs. The noise of the snails crunching on the fennel was distracting. Hilarious and distracting.
For the next nine days we fed them herbs, then cornmeal, then nothing in a process called “purging” to clean the snails from the inside out. The whole process can easily be sped up to five days. The key points are:

Get details on harvesting and preparing garden snails here.

You would think you could now just cook them, but turning snails into something not just edible but tasty and appealing is just a wee bit more complicated than that. There is parboiling, removing from their shells, and then a quick cook in acidulated water to de-slime them. I tried skipping this last step and just cook them with plenty of acid. I ended up with an inedible slimy mess that looked not unlike vomit. Whether you’re making traditional Burgundian escargots or another snail dish, the first steps of cooking snails are the same: Bring a pot of water to a boil. Add plenty of salt. Rinse off the snails—making sure they are poo- and slime-free before you start! Dump them in the pot and cook them for about 3 minutes. Drain the snails and rinse them with plenty of cold water. Use tweezers or a small fork to pull the snails out of their shells. Be warned that there will be more mucus involved here. In some cases a lot more mucus.

On the upside, when you pull the snails out most of them will stretch out as you pull and the spring back into a curlicue shape in a most pleasing and delightful way. On the downside, some of the snails will look like globs of gray diseased snot because they will be coated in so much mucus.
While you’re removing all the mollusks from their curly shells, bring a pan filled with ¾ water and ¼ distilled white vinegar to a boil. Plop in the de-shelled snails and boil them until they are slime-free, about 3 minutes. A snail you pull out of the water should not feel slimy and you will probably be able to see bits that look like tiny specks of curdled egg in the water—that’s the mucus that’s cooked off the snails. Drain the snails and, obviously, rinse them in plenty of cool water to get all the bits of cooked slime off of them. The snails are now ready to be cooked in a recipe.

I made traditional garlic butter–slathered escargots as well as a salad with crisped pancetta and sautéed snails. Snail lovers found them sweet and tender; I found them somewhat mushroom-like but, honestly, thoughts of slime and poo would not leave my head long enough for me to enjoy them.
My son, however, had no such trouble. He swiftly ate a dozen from their shells. Then, when I found a dish of eighteen un-shelled snails that I had accidentally left in the oven after the photo shoot, he downed those too.

When the big one hits or my son asks with verve, I am prepared, if necessary, to tackle buckets of slime and poo again. For the moment, though, I prefer my snails packed up in a neat oven-proof tray with a pretty French sticker on top. Better yet, I’ll take them sizzling hot and set in front of me by an aloof but efficient Parisian waiter.

*This story comes to us from Edible San Francisco.