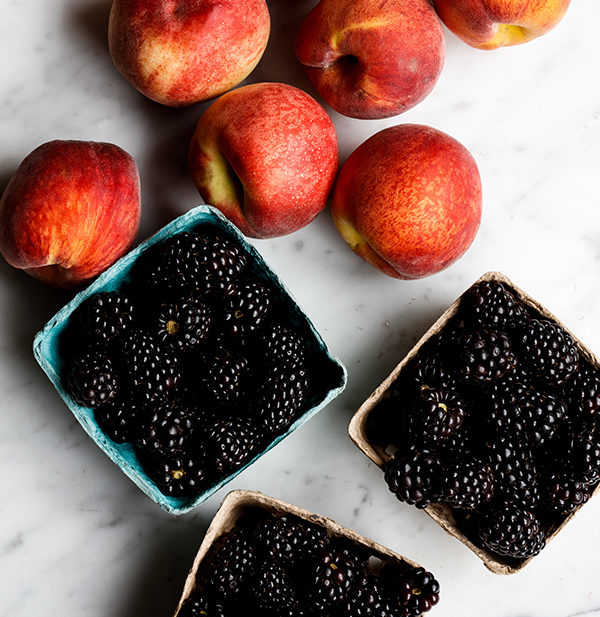 You are here: Home / Seasonal Ingredients / What’s In Season in Summer?

From apples to zucchini blossoms—a quick look at the bounty of summer.

What grows where and when varies. Tremendously. On place, obviously. But also on that year’s weather. On late frosts and heavy rain. On unseasonable winds. All that said, these are the fruits and vegetables that, in general, are in season over the summer months in much of the U.S. and parts of Canada. A good rule of thumb is that the warmer the weather, the earlier the harvests start. A better rule of thumb is to observe the pattern at your own market and talk to growers about what’s coming up.

Apples do have a season, which is easy to forget because so many varieties have been bred to last so long in cold storage. Plus, between different varieties, their harvest season can go on for months in many areas—starting by the end of summer and going through fall where apples grow.

Apricots are fussy fruits, delicate and temperamental—they don’t travel well so if apricots don’t grow where you are, you may well never see a fresh one. Where they do grow, they are harvested starting in late spring and through early summer.

Asparagus is strongly associated with spring, but its harvest extends well into summer and often doesn’t start until summer in colder regions.

Avocados are fickle. Most, however, are in season over the summer. Many are harvested before they’re ripe because they are one of the stunning fruits that continue to ripen after being picked—speed it up by putting them in a paper bag on the counter, slow it down by popping them in the fridge.

Basil grows is lovely big bushy bunches. It loves tomatoes as much in the garden as on the plate. Look for leafy stems without buds, since the leaves can take on a bitter edge once they flower.

Bell Peppers of all colors come into season over the summer and into early fall. Look for ones that feel heavy for their size and have smooth, shiny skins.

Beets may show up as early as spring in warmer areas, baby ones at least.  Look for beets sold with their green still attached, if you can—it lets you know they are freshly harvested and gives you a two-for-one in the kitchen since you can cook the greens like spinach or chard.

Berries of all sorts tend to abound in summer. Strawberries tend to come to market first, followed by blueberries, raspberries, and blackberries. Strawberries and blackberries should be brilliantly shiny; raspberries and blueberries have more of a matte finish; they should all be beautifully plump. That plumpness includes less common berries, such as huckleberries, salmonberries, cloudberries, and gooseberries, as well. No matter what kind of berry you’re buying, taste them, if you can, to avoid under-ripe or bitter berries.

Carrots are harvested year-round in temperate areas. Unusual varieties are harvested during the carrot’s natural season, which is late summer and fall. True baby carrots – not the milled down versions sold in bags at grocery stores – are available in the spring and early summer.

Chard, be it Swiss or red or golden, grows year-round in temperate areas, is best harvested in late summer or early fall in colder areas, and fall through spring in warmer regions. Beware that like most greens, it can turn bitter once the weather turns hot.

Cherries are ready to harvest at the end of spring in warmer areas. Sweet cherries, including dark cherries such as Bing and yellow or pink varieties such as Rainier, are available sometime from May to August. Sour cherries have a much shorter season and can be found for a week or two, usually during the middle of June in warmer areas and as late as July and August in colder regions.

Chiles, also known as hot peppers or chilies, thrive when they have long stretches of heat to ripen them. Look for them at the end of summer and into early fall.

Collard Greens bolts or flowers when it gets hot enough, which turns the leaves bitter. In hot climates, they are in season all year except summer; everywhere else summer is their season.

Corn is a true symbol of summer—along with peaches and tomatoes. Since its sugars start converting to starch the second it’s picked, corn is definitely something to look for from local growers. Freshly picked corn looks… freshly picked, with fresh-cut stem ends and tightly closed, fresh husks. The colder it is where you live, the shorter the harvest season, so shuck those ears while you can.

Cucumbers are cool, literally, which is why it’s so convenient that they’re ready to harvest in most areas right as the weather turns hot-hot and summer really gets going.

Edible Flowers may be harvested year-round if you live where the weather is glorious all year, but in cooler areas they are harvested in spring through summer.

Eggplant tends to share the season with peppers, and should also feel heavy for their size and have shiny, tight, smooth skin.

Fennel is another vegetable that bolts and turns less delicious in hot weather but is in season in cooler climates in the summer (look for it fall through spring in temperate and warmers areas).

Figs tend to fruit twice a year; the main harvest is during mid to late summer with a second shorter season in warmer climates in late fall.

Garlic is another one that it’s tricky to remember it has a season since it’s available from storage from one harvest to the next. Yet, if you notice, by spring lots of garlic you buy may have started to sprout, which can render it bitter and make us all yearn for the new crop due by late summer and early fall.

Grapes of all varieties ripen towards the end of summer where they grow best with the harvest continuing into fall.

Green Beans have a natural season from mid-summer into fall in most regions.

Lemongrass requires some heat to grow, but where grows it tends to come into season over the summer. Look for fresh-looking stalks that smell heavenly.

Lettuce is in season during summer in cooler climates and out of season in warmer ones, where it bolts in the heat.

Limes are out of step with other citrus fruits in that they are at their best in summer. Like all citrus, however, choose heavy-for-their-size fruits.

Mangos need tropical heat to ripen; they come into their sweet best in late spring and summer in Florida and Hawaii.

Melons of all sorts should always feel heavy for their size. Many melons, especially cantaloupes should have a ripe sweet melon smell, too. Watermelons, by contrast, give us no such olfactory cue to their ripeness.

New Potatoes are freshly harvested potatoes with paper-thin skins and tend to be quite small. In warmer areas, they show up in spring; in cooler climes, summer is their time. Try them simply boiled and buttered or use them in potato salads.

Okra needs a lot of heat to grow, so a nice long, hot summer in warmer climates brings out its best and the harvest tends to last well into fall.

Onions come from storage all year round but are usually harvested in late summer through the fall. Sweet onion varieties tend to be harvested earlier.

Peaches & Nectarines are one of the highlights of summer eating. Look for fruits that feel heavy for their size and that give just a bit when pushed. Avoid any that have green near the stem.

Pears may be associated with fall, but their long harvest season—extended by the fact that different varieties come into season at different intervals—starts in summer in many climates.

Peas are a lot like corn—they can travel but are never quite as sweet when they do. Warmer areas see them at their best by late spring, but summer is the time to look for them in cooler regions.

Plums & Pluots should, like most fruit, feel heavy for their size and have a lovely, perfumed and sweet smell. Look for them in July and into fall.

Radicchio is sweeter when it doesn’t get too hot but comes into season in summer in cooler climates. Look for somewhat firm heads, a fresh-cut end, and bright white ribs on the pretty purple leaves.

Radishes should have bright, fresh greens attached (that tells you they are freshly harvested). Heat will tend to make them “hotter,” but since they grow to harvest in about 6 weeks, they also tend to have what seems like a very long season as farmers harvest continual plantings.

Ramps, also known as wild leeks, are foraged in the spring and early summer in the cooler climates where they grow. Look for them at farmers markets and specialty stores.

Rhubarb is the first fruit of spring in many areas but stays in season into summer in most areas it grows. Choose rhubarb with heavy stalks and shiny skin.

Shallots are milder, sweeter, and less bitter than their onion and garlic cousins—perfect for salad dressings—and are in season in late summer and early fall in cooler areas; whereas they are harvested in winter in warmer places.

Shelling Beans are those beans that can become dried beans but are briefly available fresh. In warmer areas, they are harvested in summer; in cooler areas, they won’t be available until the fall. Shelling beans include everything from cranberry beans and butter beans to fresh soybeans and chickpeas (in warmer areas you may see these in small two-bean green pods with twisted vines).

Spinach, indeed, has a season. It varies with your climate – year-round in temperate areas, summer and fall in cooler areas, fall through spring in warmer regions.

Tomatillos look like small green tomatoes with a light green papery husk but have a noted lemon-like tang. Look for them in summer and into fall.

Tomatoes are the cause célèbre of local eating, serving as the number-one draw to the farmers market for many. The gateway produce, if you will, for locavores. Try to sample tomatoes before you buy them – even beautiful, heavy, unblemished specimens can lack the flavor you want.

Zucchini & Summer Squash, as their name implies, have a harvest season that starts in the summer and runs into fall in most climates.

Zucchini Blossoms used to be difficult to find, pinched off male plants and left in the field. Now they’re increasingly sold at farmers markets and specialty stores in the summer. It’s easy to know if they’re fresh since they wilt and turn brown when they’re not.