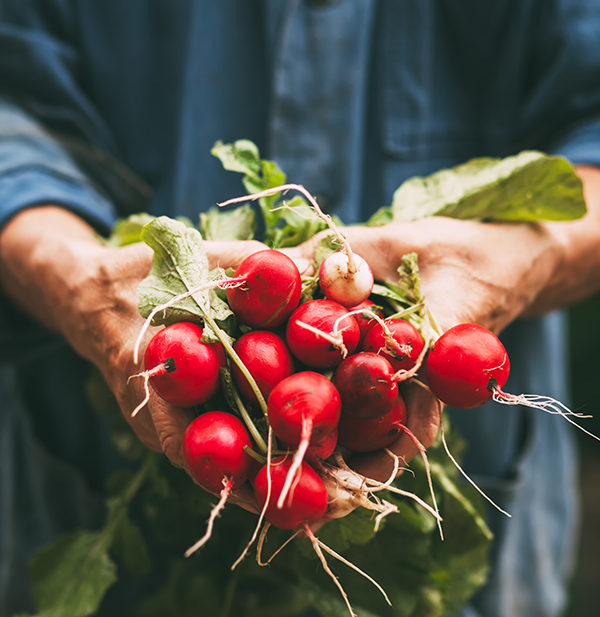 You are here: Home / Seasonal Ingredients / What’s In Season in Spring?

What’s in season when will vary not just region to region, but year to year—each year’s weather pattern will affect what gets harvested when, plus what booms (and what busts). These are the fruits and vegetables to look for in spring, be it at farmers markets, from your CSA, or at grocery stores featuring locally grown produce. Scroll down for buying tips.

Apricots. Fresh apricots are tender and delicate, so they aren’t the best of travelers. If you live in a warmer area where they grow, start looking for them towards the end of spring.

Artichokes. These edible thistles have two seasons, the first and main harvest is in the spring, while the second burst happens in the fall. Whatever the season, look for artichokes with compact heads with tightly packed leaves and stem ends that don’t look too dry or desiccated.

Arugula. This dark green, peppery leaf is also known as “rocket” is parts of the English-speaking world. Like most lettuce-type leaves, it bolts and turns bitter when things get too hot. Young, tender arugula is often at its best in spring.

Asparagus. These spears aren’t the easiest to grow—it takes about four years after planting to have a crop to harvest, which happens from March to June. When buying asparagus, don’t be fooled into believing that thin asparagus is better. Thicker spears tend to be more tender and flavorful.

Beets. These colorful root vegetables start coming into season in spring, showing up as baby beets, which are small specimens pulled as farmers thin the fields to make room for other beets to grow. Look for beets sold with the greens still attached for a great two-for-one.

Cardoons. These thick stalks taste a lot like artichokes one you peel off their tough skins. Choose stalks that feel heavy for their size if you’re lucky enough to find them.

Carrots. True baby carrots are thin ones pulled from the fields in spring, not factory-made cut down versions, look for them in spring.

Chard. Whether Swiss or red or rainbow or golden, chard can turn bitter in hot weather. Since it likes mellow temperatures, its season ranges greatly regionally, but in warmer and temperature areas, it floods into markets in spring.

Cherries. Sweet cherries are ready to harvest towards the end of spring in warmer areas, setting the stage for the summer season in cooler areas. Sour cherries don’t come around in spring at all—we have to wait for summer for their much shorter season, usually confined to a few weeks in mid-June in warmer regions and as late as the end of July and early August in colder areas.

Dandelion greens. These bitter leaves are some of the first greens to be available come spring. If you want to forage them from your yard or park, check to see what kind, if any, chemicals, have been used on the area first.

Fava beans. These Mediterranean favorites are great nitrogen fixers, meaning farmers often plant them to improve the soil for other crops. They are also delicious, whether small and raw with olive oil and salt or more mature and braised with garlic and herbs. They come into season in spring in warmer climates, summer and even towards fall as it gets cooler.

Fennel. This anise bulb has a long season where it grows. Spring is the end of its season in the most temperate areas and the very start where it’s cooler.

Fiddleheads. These wild young ferns are foraged, not grown, and start to fill the forest floors where they grow in early spring through early summer. Look for them from foragers at farmers markets and specialty stores.

Garlic scapes. These are the flower stalks of hard-necked garlic, a variety grown in colder areas. They have a fibrous texture, so are easiest to use if minced, although long cooking or pickling are also good options.

Grapefruit. These large citrus fruits come into season in the warm climates where they grow in the middle of winter, but stay sweet and tart and juicy into early summer.

Green garlic. Green garlic is immature garlic—it looks like an overgrown green onion. Look for it in spring and early summer and use it as a less intense but equally aromatic green garlic.

Kale. Different varieties are available at different times, but keep your eyes open for young kale as spring is sprung, especially in warmer regions.

Kiwis. These fuzzy-skinned fruits are harvested in the fall and early winter but are surprisingly hearty in storage, so you may see local specimens for sale into early spring.

Kohlrabi. This alien-looking cruciferous vegetable is usually harvested in fall and early winter, but in temperate areas may still be harvested into early spring.

Kumquats. Tiny and fully edible, peel and all, these citrus fruits are harvested starting in late winter and usually available into early spring.

Leeks. The young ones are for spring. Skinny and no tough runner core and tender dark green leaves—avoid wilted tops and browning. If it’s been raining out, prepare to thoroughly clean leeks, since dirt and grit have a way of splashing up in-between the leaves.

Lemons. These bright yellow, tartly acidic fruits are at their juicy best through winter and into early summer. As with all citrus, look for lemons that feel heavy for their size.

Lettuce. Salad greens of all kinds start coming into season in spring. Young tender varieties will be the first at market—be sure to keep your dressings light in flavor and texture so you don’t overwhelm them.

Morels. The cone-shaped, sponge-like mushrooms have an earthy edge even for fungus. Look for firm morels and prepare to swish them around in a big bowl of water to remove as much dirt and grit as possible before cooking them.

Nettles. Also known as stinging nettles, these earth greens so, indeed, sting when handled raw, so wear gloves or plastic bags over your hands. A quick dip in boiling water tames their aggressive nature, rendering them tender, brilliantly green, and tasting of spring.

New potatoes. These aren’t just small potatoes, they are potatoes harvested before their skins have gotten any thicker than tissue paper. As such, they don’t have much of a shelf-life. Boil them, butter them, and sprinkle them with salt and parsley. Or toss them is a flavorful green sauce.

Pea greens. These tangled vines and leaves are pulled and sold in the spring and early summer. Look for vibrant leaves and avoid mushy stems.

Peas. All the peas. The garden peas. The snap peas. The snow peas. They all start to come into season in more temperate areas come spring.

Radishes. With their quick plant-to-harvest turn-around, many climates allow for several crops of radishes to be harvested. The first one comes during spring. Look for radishes with bright green leaves attached (you can treat them like cooking greens!).

Rhubarb. Look for heavy stalks with somewhat shiny skin when buying what is often the first local fruit of spring.

Spinach. These deep dark leaves have a season that varies with climate, of course, but it’s around in spring in temperate and warmer areas.

Spring onions. These are young onions farmers pull from their fields when they’re thinning the rows to make room for other onions to grow big and strong.

Strawberries. Most commercial strawberries are grown in California or Florida, where through breeding different varieties and using various farming methods, these sweet red fruits are in season during all but the darkest winter months. They are in their peak (and some may say more natural season) from April to June, with a later, and often shorter, seasons in other locales.

Turnips. Like beets, baby turnips are pulled to make room for their brethren to grow. Look for bunches with the greens still attached—they are delicious cooked.