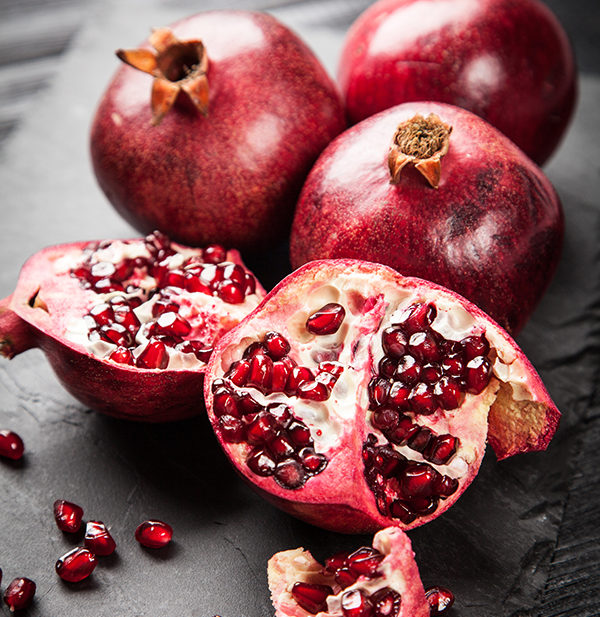 You are here: Home / Seasonal Ingredients / What’s In Season In Fall?

Persimmons and pomegranates and pumpkins—oh my.

Is it not fall? See the summer, spring, or winter guides as the calendar demands.

Apples picking and bobbing and pie-baking and cider-making are all famously fall activities for good reason: it’s the height of apple harvest season.

Artichokes are thought of as spring vegetables, but the plants produce a second, smaller crop in the fall.

Arugula loves cool but not cold weather, hence this peppery green is harvested at widely different times in different places (winter in warm climates, summer in cool ones) but grows in many places during autumn.

Beets are in their prime in the fall, with full-grown versions available freshly dug up with their bountiful greens still attached and ready to cook up like chard..

Belgian Endive are mostly “forced” to grow in artificial conditions that mimic the traditional method of covering them with sand in the field to keep out the light and give them their distinctive pale leaves. Their traditional season, however, like that of all chicories (see below) is late fall and winter.

Broccoli can be grown year-round in temperate climates, so we’ve forgotten it even has a season since it’s in grocery stores all the time. Yet it is sweeter, less bitter and sharp when harvested in the cooler temperatures of fall and early winter in most climates.

Brussels sprouts grow on a stalk, and if you see them for sale that way snap them up – they’ll last quite a bit longer than once they’re cut. Like their cruciferous cousins, broccoli and cauliflower, they grow so successfully in temperate climate all year round that they get shipped hither and yon, letting us forget they have a natural season, and that season is fall.

Cabbage is snappy and bright when raw and mellows and sweetens the longer it’s cooked. The cooler the weather when it’s harvested, the sweeter it tends to taste (this effect is called “frost kissed”).

Carrots are harvested year-round in temperate areas. Harvest will begin in summer in many areas but come into its own in fall. Locally grown carrots are often available from storage through early winter even in colder climates.

Cauliflower is by nature a cool weather crop and at its best in fall and winter and into early spring.

Celery Root, also known as celeriac, is a big hairy root that must be aggressively peeled to prepare. It is at its best in the cooler months of fall, winter, and early spring, except in cold climates, where summer and early fall are its season.

Celery is at its crunchy, hydrating best in the fall, with its harvest continuing through winter in warm and temperate climates.

Chard is best harvested in late summer or early fall in colder areas, and fall through spring in warmer regions—like most greens, it turns bitter when the weather is hot.

Chicories are cool weather crops that come into season in late fall and last in temperate climates through early spring. They include escarole, frisée, radicchio, and treviso, as well as Belgian endive (see above).

Chiles are best at the end of summer and into fall. Dried chiles are, of course, available year-round.

Cranberries, native to North America, and are harvested in New England, the Upper Midwest, and the Pacific Northwest in the fall.

Eggplant comes into season towards the end of summer, but look for shiny heavy-feeling specimens well into fall.

Fennel has a natural season from fall through early spring. Like most cool weather crops, the plant bolts and turns bitter in warmer weather.

Figs have a short second, smaller season in late fall in warmer climates.

Garlic is a fall crop in cooler climates—cured and stored for sale until next year’s harvest.

Grapes ripen towards the end of summer and the harvest continues into fall, often with different varieties ensuring availability for severla months in a row.

Green Beans are at their best from mid-summer into fall in most regions—although the Thanksgiving casserole tradition is stretching it on the fresh front.

Horseradish is at its kicky best in fall and winter. As a root vegetable, it stores well and is often available in decent shape into spring.

Sunchokes are brown nubs that look a bit like small pieces of fresh ginger. Look for firm tubers with smooth, tan skins in fall and winter.

Kale is kept on the sweeter side by cooler weather, meaning it’s often at its best in fall.

Kohlrabi famously looks like it comes from another planet, with stiff stems shooting up from the central bulb that grows sticking out of the ground comes into season many places during fall; in temperate areas, it’s available into spring.

Leeks are often harvested over long stretches starting in the fall. Look for thinner leeks, since thicker ones tend to have woody cores.

Mushrooms, at least truly wild, foraged ones have wildly different seasons, yet many are foraged and sold in summer and into fall.

Okra needs heat to grow, so a nice long, hot summer in warmer climates brings out its best. Look for firm, plump pods in late summer and fall.

Onions are primarily harvested in late summer through fall. They are then cured (or slightly dried) and held in cold storage for sale through the rest of the year.

Parsnips may look like fat white carrots, but they are not. These root vegetables are harvested in the fall and early winter and have a great nutty flavor. Look for thinner specimens, since the woody core at the heart of all parsnips gets so thick you need to cut it out of the fatter ones.

Pears come in so many varieties that as a group they have a season that spans from mid-summer well into winter, depending on your region.

Peppers of all varieties, from sweet to hot are harvested in late summer and into fall.

Persimmons of both varieties—Fuyu and Hachiya—are harvested in the fall and into early winter, hanging as bright orange ornaments in stunning fashion on trees that have lost their leaves.

Pomegranates can grow in a range of regions but only ripen in warmer climates. They are in season starting in October and are usually available fresh through December.

Potatoes, much like its fellow root vegetables, are great storage vegetables, but they are harvested in the fall.

Pumpkins are the most common winter squash (see below) and come into season in September and, of course, into October in most areas.

Quince are an under-appreciated fruit. That may be because they are more or less inedible when raw. When cooked, however, these orchard fruits that look like bulbous pale apples, are available in fall and early winter.

Radicchio, like all chicories (see above), is sweeter and less bitter when the weather turns cool.

Radishes have such short growing seasons that they can be sown several times in most climates. Fall marks the end of the season for small red radishes and the beginning of the season for larger daikon-type radishes.

Rutabagas are harvested in fall and early winter. They are also known as “yellow turnips” and “Swedes.” They are a sweet, nutty root vegetables perfect in stews, roasted, or mashed with plenty of butter.

Shallots are harvested in late summer and into fall and are at their sweetest when fresh.

Shelling beans are those beans that can become dried beans but are briefly available fresh, as shelling beans, in mid-summer to early fall depending on your climate. They can include cranberry beans, butter beans, edamame (fresh soybeans), and other fresh versions of dried beans.

Spinach, surprisingly, has a season. It varies with your climate: year-round in temperate areas, summer and fall in cooler areas, fall through spring in warmer regions.

Sweet Potatoes, also sold as yams. They store well and are available from local sources year-round in warmer areas; from late summer through winter, mainly in fall, where things are less balmy. Their greens are great for cooking, if you can get your hands on them.

Tomatillos look like small green tomatoes with a light green papery husk. Their season can start at the end of summer but really gets going come fall.

Tomatoes are thought of as beasts of summer, but their harvest extends well into fall in many regions.

Turnips can get a bad rap, but fresh specimens have a sharp but bright and sweet flavor. Much like beets, the freshest versions, available in fall, have their greens, which are good for cooking, still attached.

Winter squash from butternut to pumpkin to delicata starts being harvested in early fall and usually lasts well into winter.

Zucchini and other summer squash may be thought of as summer vegetables, but their havrest tends to last well into fall in most climates.