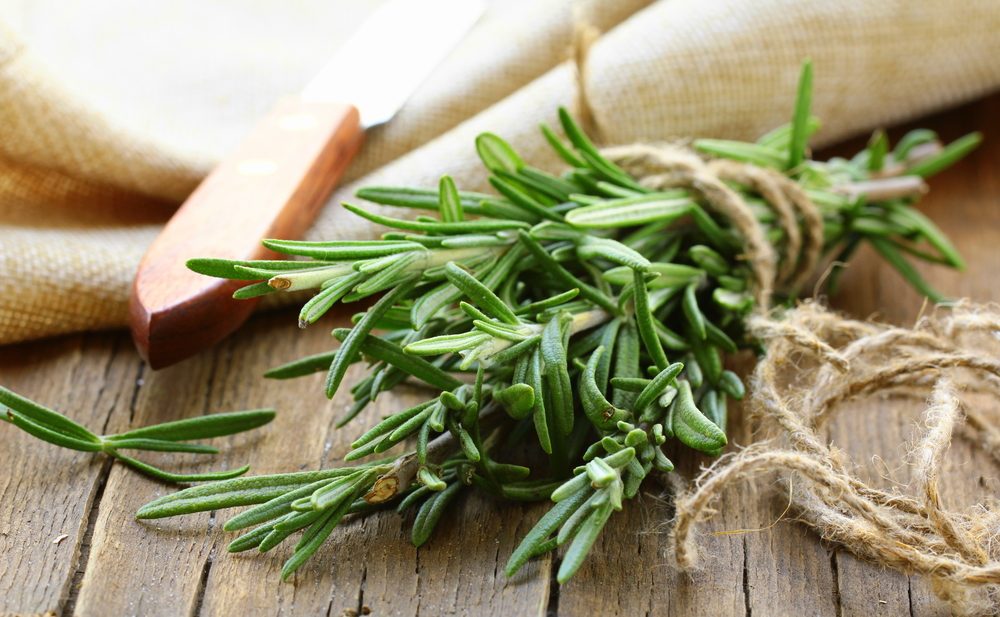 You are here: Home / Seasonal Ingredients / What We’re Cooking: Rosemary

Rosemary is an earnest herb.

Its lingering woodsy aroma and savory flavor enhance a wide variety of ingredients. It doesn’t play favorites among seasons, fitting in as well around the grilled chicken as it does in a wintery braise. It’s easy to grow in a container garden or even on a windowsill, and hardy enough to survive harsh winters. It’s so versatile that you’ll find clever recipes for it featuring in every course of a meal, from cocktails to dessert. Unlike soft herbs like basil and mint, it’s easy to overdo rosemary. Its personality is concentrated, so be careful not overwhelm your dishes by overapplying it.

It’s the fragrance that makes the rosemary shine as a cocktail ingredient. Relax after work or kick off a dinner party with this alluring Smoked Rosemary Whiskey Sour. This delightful Blueberry Rosemary Cocktail would make a refreshing nonalcoholic sipper if you replace the prosecco with a quality tonic. Or make up a batch of this Grapefruit Rosemary Shrub, useful in cocktails and mocktails alike. See also: Rosemary Cold Brew Lemonade.

You should probably serve something to nibble on while you have drinks. These Rosemary Roasted Walnuts will tide you over. Savory and salty, these spiced nuts have an unusual stealth ingredient that complements the rosemary and leaves you craving just one more bite. Rosemary and Cheddar Drop Biscuits are another winning snack that celebrates the herb.

As far as first courses go, what could be more impressive than neatly rolled Ricotta-Rosemary Stuffed Chard? The recipe calls for “good quality ricotta.” If you buy yours at the supermarket instead of a cheese shop, consider draining the excess liquid away by spooning it into a cheese-cloth-lined sieve placed over a bowl and letting it drain overnight in the refrigerator. This no-fuss Rosemary Infused Honey spooned over a fancy blue cheese would also be an elegant start (or finish) to a meal.

Let’s talk entrees. Vegetarians and those who just love meatless mains will be please with hearty and robust Barbecued Mushrooms with Rosemary, Garlic, and Soy Butter. Chicken and rosemary make a good team, and these Rosemary Chicken Thighs are quick and easy enough to throw together on a busy weeknight. Braised Tuscan Meatballs with Rosemary and White Wine offer an herb-forward alternative to the usual red sauce. The recipe suggests serving bread to soak up the sauce, but maybe consider spooning meatballs and sauce both over a hillock of buttery polenta. If you want a way to bedazzle a plain piece of chicken or fish, this Rosemary Rhubarb Compote could help.

As far as side dishes go, when we’re trying to use up fresh rosemary, potatoes are a must. Keep things simple with these Roasted Fingerling Potatoes. But it’s hard to find a potato recipe you couldn’t sneak some rosemary into, so let your cooking intuition be your guide when it comes to this ingredient love match. Summer Squash with Rosemary and Lemon would also be good, whether or not you want to serve it as vegetable or layer it on toast. You can also apply this Rosemary Olive Oil to your steamed or roasted vegetables as a final flourish.

It may strike you as a little weird, but one of the highest and best uses of rosemary is actually dessert. Butter carries flavor through a dish, so it’s easy to infuse your baked goods with subtle notes of rosemary that add depth and complexity to otherwise familiar foods. It turns an everyday dessert into something memorable, as in this Rosemary Cake with Macerated Peaches. Even a basic cookie can be something special with a hit of herbal fragrance. These Lemon and Rosemary Cupcakes might look a bit like something you’d serve at a kid’s birthday party but their flavor is distinctly grown up. If you are feeling up to a project and want to make something extra impressive, these Rosemary Rhubarb Maple Creme Brulees will give you a reason to break out your kitchen torch.

Whichever way you’re going to use rosemary, know that it keeps very well, which is good since small amounts go a long way. Simply wrap it loosely in plastic and sprigs will keep in the fridge for at least a week, often longer. Or keep it in a small vase, like flowers, and let the refreshing scent perfume your kitchen before it flavors your dishes.