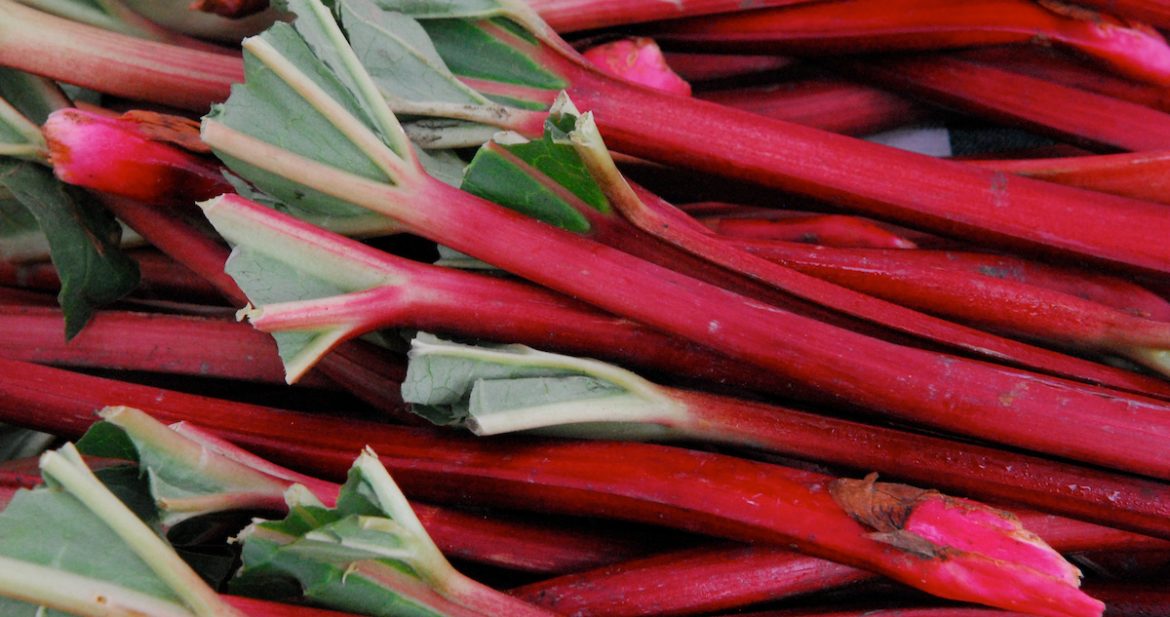 You are here: Home / Seasonal Ingredients / The Best Ways to Use Rhubarb This Spring

Rhubarb looks like celery’s embarrassed cousin, but this springtime stalk has nothing to be ashamed of.

Though technically a vegetable, it’s used most often as a fruit in pies and preserves. But rhubarb works well in savory dishes, too, often balancing out rich flavors with its assertive acidity.

How to Find the Best Rhubarb

When shopping for rhubarb, look for slender stalks that are really pink or red. They’ll be more tender and less sour than the fatter, greener ones on offer. Should your rhubarb retain any leafy green on top, cut it away and compost it. Rhubarb leaves contain oxalic acid, a poisonous substance you definitely don’t want to eat. Once that’s out of the way, you’re free to enjoy all the good nutrition rhubarb brings to the table, including healthy doses of vitamin C and calcium.

First, though, you’ll need to cook it. Rhubarb’s intense sourness is most pronounced when it’s raw, making it practically inedible until heat (and almost always, some sweetener) is applied. Here are tasty ways to use up your rhubarb while you’ve got it.

Like most vegetables, rhubarb respond well to roasting. In this Roasted Rhubarb, Arugula and Goat Cheese Salad, the stalks are bathed in honey before a quick turn in a hot oven. Then those tender pieces of rhubarb are tossed into the salad bringing an interesting texture and an unusual flavor.

Only the thinnest, most tender stalks of rhubarb will do for this Fresh Rhubarb Salsa recipe. This is the rare exception to the general rule of rhubarb, which is that it should be cooked. Cucumbers, bell peppers, and honey balance the sourness in this relish-like condiment that works best with rich meat, like pork.

Pierre’s Rhubarb Galette was created by chef Jacques Pepin to honor writer Pierre Franey after he died. Making it is a project–there’s pastry crust, filling, and topping to prepare before you assemble and bake–but the results are a worthy use of your rhubarb and to pay tribute to an American icon at the same time.

These gluten-free Rhubarb Muffins are crowned with a crumbly streusel topping and enriched with fragrant coconut milk and coconut oil. Whether you’ve got a wheat aversion or not, rhubarb lovers will appreciate these sweet and sour treats.

Strawberry Rhubarb Pie is the primordial rhubarb recipe. The two are harvested in the same short season and the sourness of rhubarb sets off strawberries’ sugared perfume like nothing else. Be advised, once you start baking this in springtime you’ll be on the hook for pies year after year. The people will demand it.

This Apple Rhubarb Tarte Tatin is a puckery twist on the French classic. The recipe calls for frozen puff pastry so it’s easier than it looks to pull it together. You can make it in under an hour.

A burger is only as good as its garnishes. And these Wild Alaska Salmon Burgers with Rhubarb Chutney really deliver on that score. The salmon patties are topped with tangy chutney, lettuce, red onion, and pickles. We approve!

Let’s say you want to preserve some of your rhubarb bounty but you can’t be bothered with the water baths and other fiddley steps true canning requires. Enter Rhubarb Freezer Jam with Citrus and Thyme. It’s a fuss-free way to keep that rhubarb magic alive.

Paired with zesty ginger, sweet maple syrup, and fiery jalapeno, rhubarb cooks down into a scene-stealing sauce in this recipe for Baked Rhubarb and Ginger Cod Over Sauteed Minty Spaghetti Squash. Any mild white fish would work here.

A crimson rhubarb syrup gives this Rhubarb Gin and Tonic is pretty pink glow. Not feeling gin? Substitute vodka. Or, for a booze-free beverage, add the rhubarb syrup to your favorite tonic and garnish with a lime wedge.

Rhubarb and lemon blend together for a layered tartness in this refreshing Rhubarb Mint Pink Lemonade. Add a sugar rim to your glass to make it extra festive–and a touch sweeter.