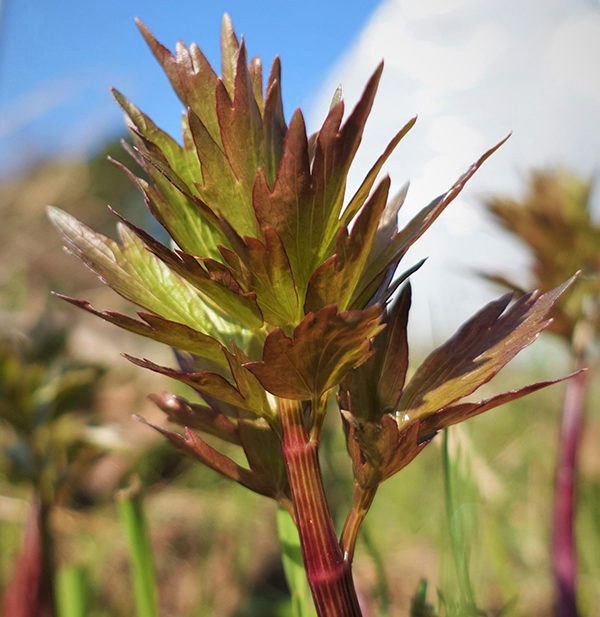 I fell in love with lovage long before I ever tasted it.

The day my husband’s elderly Uncle Bernie painted a romantic vision of how this herb of his yesteryear could elevate one’s cooking to the next level, I knew I must have it. Surely, I would be worthy of such an herb.

Uncle Bernie was known for bringing banana nutmeg malts and strawberry rhubarb strudel bars into the family’s recipe hall of fame. His culinary insight could be trusted. He described using fresh leaves and roots in soups and stews and to season meat. He likened the flavor to celery but stronger, with no bitterness and more on the savory and wild side.

With that, my lovage quest began.

Uncle Bernie had not been able to find lovage for years. If only I could find a grocery store that carried it, I too would discover the wonders of this holy grail of herbs. A year of searching passed and I learned fresh lovage does not grace grocery produce shelves.  Nor was I lucky enough to find it at any farmers markets.

The more I couldn’t find it, the more I wanted it.

My research unearthed that lovage (Levisticum officinale) finds its origins in southern Europe and at one time was the second most used herb in Romania behind parsley. It is a member of the same plant family as carrots, celery, and parsley – no wonder, as Uncle Bernie said, lovage would show its full glory in soups. It was an incredibly efficient plant: all parts—roots, stems, leaves, seeds—are usable.

When I finally accepted that I wasn’t going to be able to just buy it, I became determined to grow it.  My search led me to Seed Saver’s Exchange out of Iowa, an organization known for protecting and curating heirloom seeds. My plan began to take shape: Lovage seed had been found.

The following spring with seed and garden tools in hand, I prepped a new soil bed on the west end of our house and began to tend the baker’s dozen herb sprouts that popped out of the ground. They would become my passion that year.

Mature lovage plants can grow to six feet, so I prepared myself for a jungle of lovage and began searching for lovage recipes. Beyond soup recipes, lovage was showing up as an ingredient with meats, in salads and even teamed with grapefruit to make a jelly. And if I wanted to take lovage out of the kitchen and into my medicine chest, lovage tea, or chewing on a stalk had a reputation for calming an upset stomach, reducing inflammation, possessing antibacterial properties, and even freshening one’s breath.

If a gardener’s love alone could make plants grow, those lovage babies would have looked our roofline in the eye, but as the summer went on, it became clear that outside my bedroom window a lovage jungle it was not. Those little plants grew no taller than a soup spoon and boasted only a few leaves each. My plants were doing the best they could, not having been planted in the full sun that I learned too late they deserved. There were not even enough leaves on those plants to make a full batch of soup for our family of four.

One day at lunch with my husband at work and daughter at school, I selfishly decided I would use every leaf I had to make a half batch of lovage soup for just my four-year-old son and me to split. I had been wanting this moment for over a year. Would the taste of lovage match what Uncle Bernie and time in my head had built it up to be? At first spoonful, the answer was an undeniable yes. To say the flavor was transformative is not an overstatement. Uncle Bernie’s status as a culinary guru was cemented.

As soon as my son finished tipping his soup bowl vertical to his lips to slurp the final drops, he asked for a refill. When I got down to his level and explained to him this was all the lovage we had this year and that we would need to wait until next year for more lovage soup, tears came to his eyes.

He cried. My young son cried over soup. He, like me, had fallen in love with lovage.

We were smitten. The following year I made sure we would get the full lovage production we wanted. As a perennial some of the plants had grown back, so I gave them prime billing and transplanted a few to a sunny spot in our big garden with full southern exposure. By mid-season, the plants were a good four-feet tall, giving me enough leaves for soup for the neighborhood and then some. I had enough lovage to begin using it to season meats, serve chopped over eggs, and to complement other fruit and veggies in salads.

Over the years I have come to look for the lovage plants to pop out of the ground in April, about the same time as the rhubarb and asparagus emerge. Once established it is incredibly low maintenance and only needs the patch cleaned in early spring.

When planted in the right conditions—in full sun and rich, well-watered soil,  lovage loves you back. I continue to find more uses for its unique flavor, including in green smoothies, flavored butters, and infused in oils. In the fall, the plants produce seed pods; when dried, those can be used to season dishes and stored for use over the winter, to sustain you until spring when you can get that fresh lovage flavor all over again.

Here are a few lovage recipes that I turn to again and again:

*This story comes to us from Edible Door. Story, recipes, and photos by Luann Skarlupka.