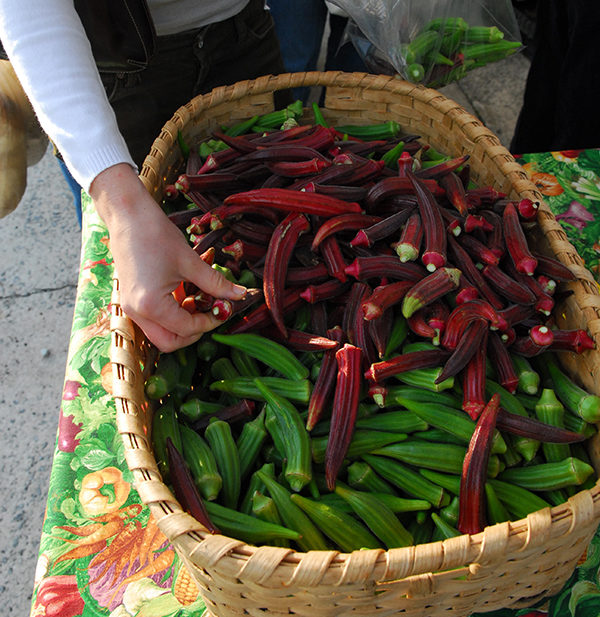 You are here: Home / Seasonal Ingredients / How to Love Okra

Okra is a love it or leave it vegetable—there are those who love its grassy flavor and those who hate its slimy texture. Yet we need not choose between the flavor and the texture. If your beef against okra is one rooted in slime, fair enough and it’s not all in your head. Like aloe vera, okra pods contain mucilage, which is made up of exopolysaccharides (sugar residues) and glycoproteins. And mucilage gets more viscous when exposed to heat—going from a bit goopy to full-on slimy. That’s why it’s so good at thickening gumbo, but frustrating if you’re trying to cook it other ways. All is not lost, though. We have a few ways you can combat the slick nature of okra by preparing it the right way.

However you choose to cook it, look for okra pods that are uniformly colored and that look plump and vibrant. Cut okra will start to brown around the stem end, so a tiny bit of browning there is okay, but less of that is better. Once you see a perfectly ripe and freshly harvested okra pod, the sad and wilted specimens so often seen in grocery stores will be as unappetizing as they are to okra growers everywhere. You’re most likely to find such okra when it’s in season—somewhere between July and October. Okra likes things steamy; hot and humid is its favorite weather.

Two easy favorites are to grill okra or to roast okra. In both cases the dry heat and lack of additional moisture, helps the moisture in the mucilage cook off, which keeps it from being slimy anymore—after all, dried up slime isn’t slime.

Grilling okra is as simple as tossing the pods with a bit of oil and a sprinkle of salt, putting them on a hot grill, and cooking until they’re browned and tender, about 10 minutes. A spicy dipping sauce isn’t out of order, but it isn’t necessary either. See this recipe for details.

Roasting okra can be done almost as simply, but cutting the okra in half lengthwise first, as explained in this recipe for roasted okra, helps it crisp up and truly eliminates any hint of slime.

Less exposure to heat means less slime. That’s why fried okra is so popular in the south. The coating protects the vegetable from the intense heat of the oil, while that same quick heat keeps the mucilage from thickening up.

A quick stir-fry or sauté can also work, as long as you have the heat up and no liquids in the pan—just a hot pan, a bit of oil, and a few turns to cook the okra without stewing it in any way. This simple recipe includes bbq seasoning for a kick.

Even steaming, when done with minimal liquid, will result in a slime-free result. Heat a bit of oil in a pan, sautee a clove or two of sliced garlic or other aromatics or spices, and then add the okra with a few tablespoons of water. Cover and steam until the okra is tender and cooked through—the short time and degree to which the liquid has been cooked off results in a slime-free dish.

Cook it with acid

Here is something I learned from harvesting a cooking snails: if you want to cut slime, acid is your needed friend. When you cook okra with enough acid, that acid cuts the mucilage and mitigates the slick. Tomato, vinegar, lemon—all of these forms of acid help keep okra from sliming it up too much. Sometimes, as in this recipe for bharwan bhindi or this recipe for stuffed roasted okra, a mix of acidic spices keep the slippery nature of okra in check. This recipe for stewed okra both cooks the okra separately and then uses plenty of tomato in the mix.

This is also why pickled okra isn’t slimy—the mucilage has been cut by the acid in the pickling liquid.

If you use okra how it is often used—to thicken soups, such as this tamarind-scented one, and stews, such as in this gumbo recipe—then the inherent viscosity has a purpose. Savvy cooks know that harnassing the power of the mucilage lets okra be its true, shining, authentic self.

Larger okra pods can get very fibrous and require longer, slower, wetter cooking to get tender, which, as we’ve seen, will up the slime factor. Look for pods 1 to 3 inches long for these quicker cooking methods.