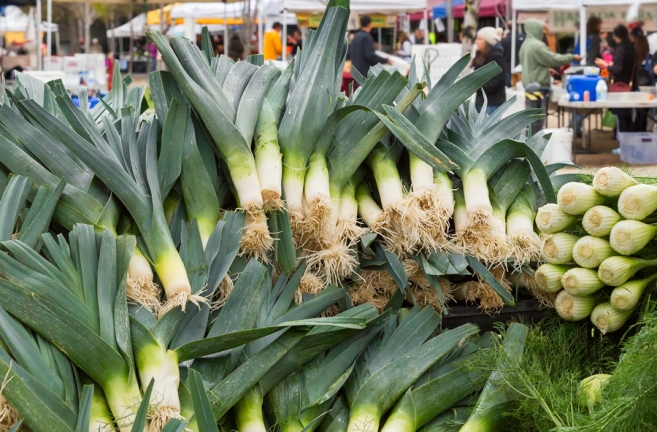 You are here: Home / Recipes / What We’re Cooking: Leeks

From frittatas to gratins, stir-frys to sformaton—find dozens of delicious ways to use leeks.

Leeks are way more useful than many cooks give them credit for. While they may look like overgrown green onions, the two are different plants, with leeks being a bit sweeter and cooking up with less of a slippery texture. Many recipes have you discard the darker green portions of the leek leaves, but those greens hold a lot of flavor. Save them to use in stocks or know that long, slow cooking renders them meltingly tender, as in this stir-fry of shrimp and leek greens.

Look for leeks with fresh-looking leaves and root ends. A bit of dirt or damage to the exterior leaves needn’t be a dealbreaker, but wilted greens, dessicated roots, or, worse, slimy roots should be.

How to Clean Leeks

Depending on the weather while they grew and when they were harvested, leeks can hold a fair amount of grit and dirt between their seemingly tightly-layered leaves, so be sure to give them a good rinse before using. There are a lot of ways to clean leeks, but the simplest is to cut them as you want for the dish and then wash the pieces in a big bowl or basin of cool water, swishing them around to loosen any dirt, and then lifting them out of the water into a colander or onto a clean towel (don’t dump the leeks and the now-dirty water into a colander, since that will deposit any dirt back onto the leeks).

One of the easiest and most popular way to use leeks is in soup. And for good reason—the simmering brings out their gentle flavor and they provide a fair amount of bulk without overwhelming whatever else is in the pot. Try a simple creamy leek soup or jazz things up with potato, leek, and sunchoke soup. Use roasted acorn squash as the base to this soup featuring squash and leeks with a splash a vinegar for s surprising acidic burst.

Equally common, is to use chopped or sliced leeks in dressing or stuffing. There’s no need to limit that use to Thanksgiving—the savory bread side dish turns a simple roast chicken into a homey feast. Classic stuffing featuring leeks and sage can be stuffed in a bird or baked on its own and served alongside all sorts of roasted meats and poultry (or with a simple poached or soft-boiled egg on top for a meatless meal).

Bring two winter wonders together with braised kohlrabi and leeks as a cozy side dish. Or keep things on the sweeter side with a sweet potato and leek gratin—feel free to pile in more cheese if a richer dish appeals. Both of these dishes show how leeks can serve as a foil to richer flavors. That theme continue in this dish of pork cutlets with buttered leeks and radishes as well as in this recipe featuring a bed of leek risotto to host browned chicken thighs.

Another classic way to use leeks is with eggs. Slice and saute a small leek to stir into scrambled eggs or fill an omelet. Or make a stunning leek frittata filled with potatoes and gruyère cheese for a lovely brunch or a simple supper.

Kick up the spice level with this cozy seafood stew featuring leeks and Calabrian peppers. Or, explore the easy-to-make but stunningly elegant sformato. This cauliflower and leek sformato is a savory custard best served with a generous drizzle of extra virgin olive oil.

This meaty-seeming vegan pate with leeks and walnuts, plus a bit of olive oil and white wine, just may trick your guests into thinking it’s made with meat, the texture and deep flavor are so intense.

If you’re looking for brighter and lighter flavor, try this capellini with leeks and lemon. Your best olive oil will make it all the better.

As the weather turns warmer, make a frittata filled with leeks and dandelion greens, an asparagus, leek, and mushroom tart, or nettle, leek, and morel risotto.

Whatever you make with them, know that leeks have a decently long storage life, and will keep up to a few weeks in the fridge loosely wrapped in plastic. If you want to freeze them, clean and slice or chop them first, pop them in a sealable plastic bag, and use within about six months.

And remember, save those dark green tops to add to stocks and broths!