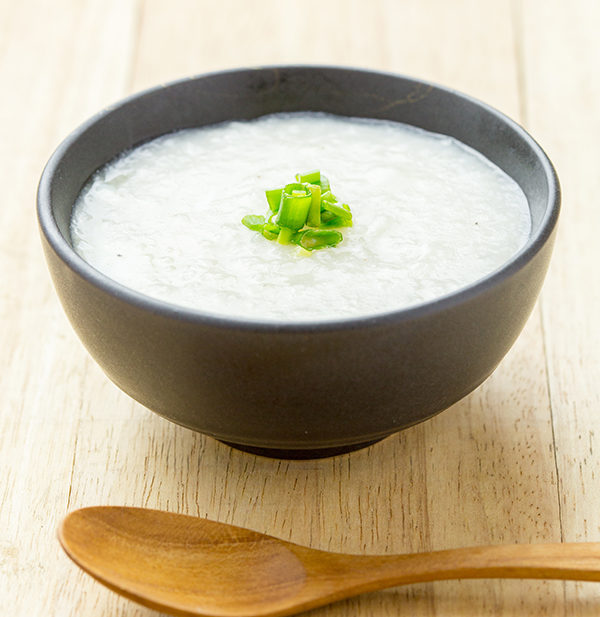 You are here: Home / Recipes / The Best Congee
Jump to Recipe Print Recipe

Or pick out the most useful pair of chopsticks, for that matter.

In the Chinese-Taiwanese immigrant household where I grew up, a pot of plain rice porridge, or xifan, was something so mundane and ordinary, no one would think to remark on it.

You may have heard about how congee has become a bit of “a thing” in recent months—how fashionable restaurants in Los Angeles and Seattle are serving fancy-pants versions that a name chef has tricked out with things like braised short ribs and heirloom rice. Of course, Chinese people—and other folks from around Asia—have been eating rice porridge for literally thousands of years. Cantonese jook houses have been a Chinatown institution for almost as long as there has been such a thing as a Chinatown. In Taipei, cafeteria-style congee shops, with their endless bowls of sweet-potato congee and buffet tables stacked with savory side dishes, have long been a late-night drunk-food staple. And in my own household, my annual day-after-Thanksgiving turkey jook has always been a bigger crowd-pleaser than the roast turkey dinner itself.

But the kind of congee I grew up eating was the simplest, most basic incarnation. Maybe we’d just come home from a long trip of eating too many rich, greasy foods. Maybe it was chilly outside. Or hot enough that no one wanted to fire up the wok. Most of the time, though, if we were having congee for dinner it was because at least one of us was feeling under the weather, done in by some stomach bug.

It was sick food more than anything, then. My mom would scoop some rice into a pot, fill it up halfway with water, and then set it to bubble away gently on the stove until the grains puffed up and bloomed, releasing their starches. The end result was a soupy rice porridge that was as silky and white as it was immaculately bland. “You should try to eat something,” my mom would say after I’d once again retched up the last dregs of whatever had been in my stomach. “Do you think you can eat something?” And then she’d set out a jar of soy sauce pickled cucumbers, a tub of pork floss, and maybe a cube of fermented bean curd—all of the condiments and little side dishes that form, to a large extent, the whole point of a congee meal.

How many times did a bowl of congee help nurse me back to health when it seemed like my stomach was incapable of keeping any other food down? Still, the truth of the matter is that I hadn’t really thought about the dish for years until a few months ago, when my daughters, ages 3 and 7, were laid low by a virus of some sort.
Here, perhaps, is where I should tell you something I worry about a lot, which is that my kids are growing up a lot less Chinese than my wife and I did as first-generation immigrants. Try as I might to buy them every single children’s book I can get my hands on that features an Asian American protagonist, their life in California is missing so many of the cultural signifiers that were part and parcel of my own childhood. My girls don’t go to Chinese school on the weekends like I did all throughout my elementary and middle school years. Despite the best laid-plans of Duolingo and their Chinese-speaking grandparents, there are only a handful of words they can say in Mandarin. They don’t know what a haw flake is. They’ve never been regaled with an impromptu bedtime story about Sun Wukong, the naughty Monkey King. They haven’t yet had the chance to travel back to the motherland.
No matter how many times I might remind them that we’re Chinese, we take off our shoes inside the house, the bittersweet fact remains: My kids are growing up fully and unquestionably American.

Food, of course, is the great equalizer (and so too, I suppose, is puking your guts out). Which is why I made it a goal this year to start cooking a proper Chinese meal at least a couple of times a week, so that my daughters will recognize a pot of steamed rice accompanied by three or four communal dishes—say, a pot of red-cooked pork, some steamed eggs, and a vegetable stir-fry—is a good and normal way to eat.

So when the girls got sick this past spring, it didn’t even occur to me to offer them saltine crackers or yogurt, or whatever it is that non-Chinese people eat when they’re feeling nauseous. Plain congee was the only option. And I’ll admit I felt a surge of, what was it—joy? pride?— when they took a liking to the stuff. Now, they’re enthusiastic when I offer congee as a meal option even on days when they aren’t sick. “Fan fan soup,” they call it—fan, or rice, being one of the Chinese words that they’ve mastered. My older daughter likes to fill her bowl with a preposterous amount of pork floss and chili-soaked bamboo shoots. My younger daughter, the family carnivore, spends the entire meal asking for nonstop refills of salmon furikake, or “sprinkles,” as she’s dubbed them.

This is the ever-rare two-ingredient dish, perfect for days when you haven’t had a chance to go to the grocery store because the side dishes—the real star of any congee meal—are mostly jarred and canned things that you can pick up at any Asian supermarket and will keep in your refrigerator or pantry for months at a time. Traditionally a breakfast food in Taiwan and China, congee also makes for great leftovers. On a hot summer night, it’s especially satisfying to eat it cold, straight out of the fridge.

The composition of your spread of side dishes will depend on your personal preferences (and whether or not you’re serving it to someone who’s sick), but classics include pork floss (a dried meat product), soy sauce pickled cucumbers, fermented bean curd, chili bamboo shoots, and braised wheat gluten. I like to open up a can of sardines in tomato sauce. A simple stir-fry of dried anchovies and peanuts makes for one of the most delicious congee side dishes if you have the foresight to make it advance. And in the spirit of cross-cultural synthesis, no one would fault you if you put out some furikake or a plate of pungent kimchi. 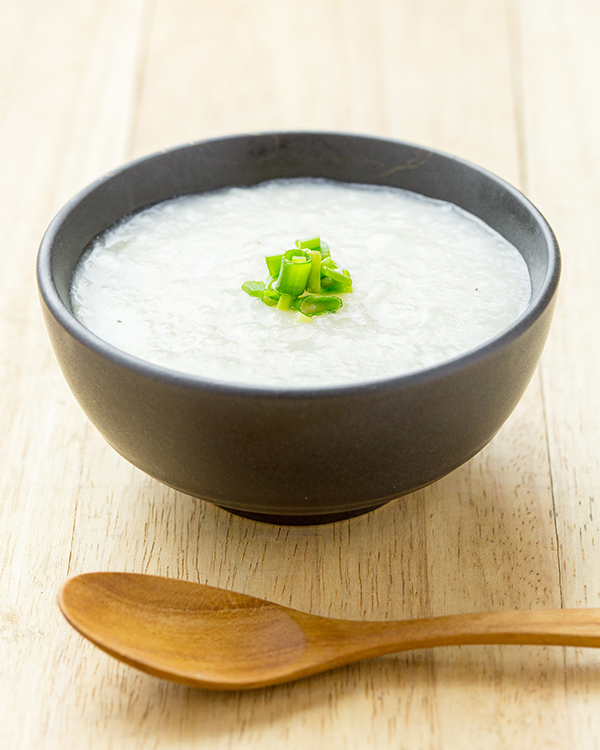