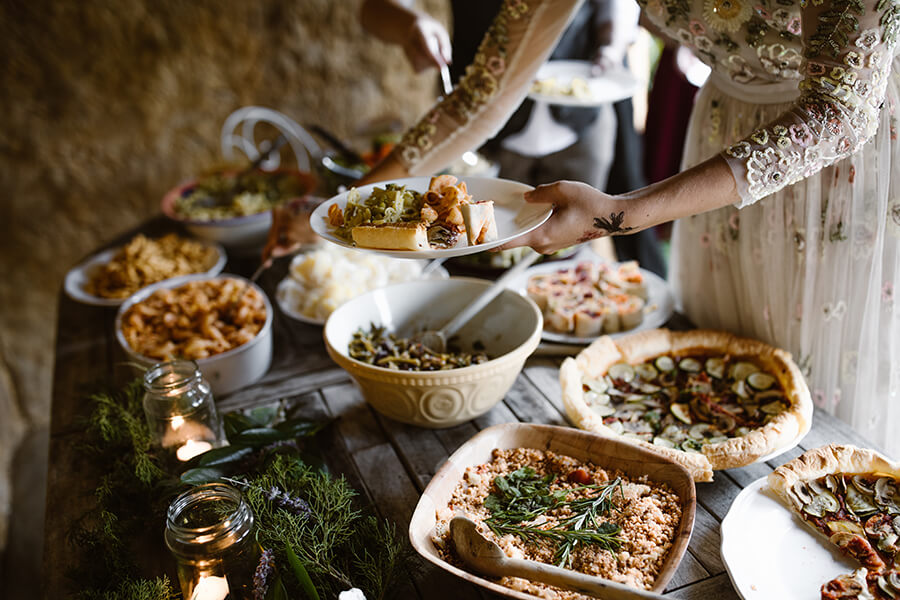 You are here: Home / Home Cooking / A Very Vegan Christmas Menu Even Meat-Eaters Will Love

Holiday meals such as Thanksgiving and Christmas, so steeped in traditions that revolve around classic roasts, can be tricky if you don’t eat meat.

Things get even trickier if you don’t eat any animal products. And then there’s the ultimate challenge: you have meat-eaters at the table or people who believe decent pies necessarily have lard in their crusts and whipped cream on top. And trickiest? If you have vegans coming but you aren’t particularly familiar with vegan cooking.

First things first, vegan means there are no animal products involved. No meat, no dairy (no milk, no cheese, no cream), no eggs, no honey. Vegan also means all kinds of sweet fruits and fresh vegetables and hearty grains and rich nuts. While to some people it sounds punitive, for those who love local foods, a vegan feast can be a delight.

A tempting, delicious, satisfying vegan Christmas menu is easier to create than plenty of people may think. Salads and sides? Those are easy-peasy. Many dishes you may already make just happen to be vegan, or could be vegan by using olive oil or coconut oil in place of butter and breadcrumbs or ground nuts in place of any cheesy topping. The best roasted vegetables are already vegan, such as this spicy roasted broccoli. The tricky part comes in the form of appetizers, where cheese and charcuterie reign supreme, mains, where the classic giant roast is king, and desserts, filled with cream and butter. We’ve gathered some of our vegan favorites here. Pick and choose as makes sense for your crowd.

This might sound crazy to the uninitiated, but you can make milk from cashew nuts and then make something very, very cheese-like from that milk. If you gussy it up—as with this herb-crusted cheese log—even the most dairy-centric guests will come back for another bite. Serve with crackers, toast, or crudités. Best of all? It tastes all the better if you make it the day (or two) ahead.

For something more labor intensive but totally worth it, try these vegan lumpia, Filipino-style rolls traditionally filled with pork and shrimp but here leaning on the power of mushrooms and cabbage, boosted up with nutritional yeast (the flavor powerhouse of vegan cookery).

While tamales are traditionally made with lard, it is in no way necessary to make a tasty tamale. There are plenty of fillings to choose from. In many families with Latin American origins, making tamales on Christmas Eve is an annual tradition. It’s fun. It’s communal. It’s delicious. See how to make tamales here and start or build on your own—now vegan—tradition.

Another solid option that leaves everyone happy for its flavorful and filling nature is stuffed squash. So many fillings—all kinds of grains and chopped vegetables and herbs and nuts—are possible, it makes it easy to customize and play in the kitchen. These rice-and-walnut-stuffed butternut squash are one option, these hazelnut-stuffed squash another, and quinoa-stuffed squash yet another. Note that many recipes for stuffed squash have non-vegan ingredients that can be easily substituted: replace cheese with vegan cheese or finely chopped nuts, any broth with mushroom or vegetable broth, and sausage with crumbled seitan.

For more casual holiday gatherings, consider keeping a big pot of soup on the stove or in a slow-cooker as part of a buffet. Try a gingered butternut squash soup creamy with coconut milk, carrot soup with chili oil and lime (use vegetable broth to make it vegan), or curried cauliflower soup.

Other big-pot options include dishes such as red lentil coconut curry served with a bright green cilantro chutney for a fabulous red-and-green dish, a mixed vegetable green curry in which you can showcase seasonal vegetables by mixing and matching, or this pumpkin and jackfruit chili with a remarkably meaty texture.

And for Vegan Dessert

Once you go beyond fruit, vegan desserts tend to involve a fair amount of substitution. Vegetable shortening or coconut oil in a pie crust makes many a pie vegan quite easily. Oil cakes are often vegan to start with, such as this rustic winter cake chock full of dry fruit. Once you start looking into the world of substitutions, there are a whole range of options. Start with a chocolate mousse with coconut cream or a stovetop apple crisp. Or make things a bit fancy, festive, and interactive with dates and tahini chocolate fondue.