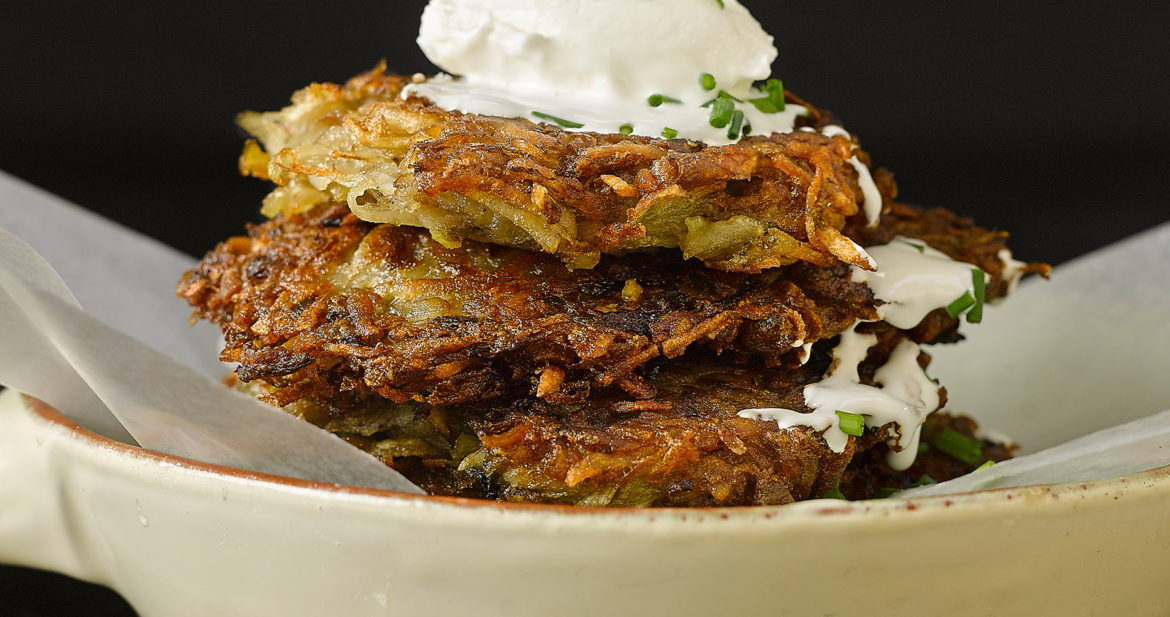 You are here: Home / Home Cooking / In Search of the Perfect Latke—12 Recipes

The best latkes have been squeezed.

Squeezed of every bit of moisture from the grated potatoes as is humanly possible. Different people have different methods. The most popular one involves grating potatoes (or whatever vegetables are being used) into a colander, pressing as much liquid out of them as you can, and then transferring them to a clean kitchen towel and twisting even more liquid out of them. Twist hard. Have the strongest person in the house do it. The drier the vegetables, the crispier the latke.

The other key to the best latkes is to have a healthy lashing of oil in a heavy, heated pan. The latke batter should sizzle as soon as it hits the pan and the latke should brown within a few minutes. If it doesn’t sizzle, further heat up the pan and try again. If the latkes brown before they’re cooked through, pull back on the heat a bit.

These classic latkes from the Zahav cookbook feature just the potatoes—thank you very much—and are topped with homemade gravlax. The latke effect is more fritter than pancake with truly lacy edges. Make just the latkes for a super simple take, or plan ahead and make the gravlax to thrill your guests.

Or go for an easier-to-hold-together option from Wise Sons in San Francisco that includes the traditional addition of eggs and potato starch to bind the grated potato together into a more clearly pancake-like rather than fritter-like form. They’re good with sour cream and applesauce or serve with smoked fish and pickled onion or crème fraîche and caviar.

Find a deeper, almost sweeter flavor with this recipe featuring Yukon Gold potatoes that depend on the traditional eggs and flour to hold them together, making them easy to handle. Or punch up the flavor even more by also including herbs as in this recipe.

For an even starchier, softer latke, this recipe adds both matzoh meal and softened “egg bread” (aka challah). It adds just a bit of baking powder to keep the texture on the lighter, fluffier side. Whereas these latkes have a bit of garlic powder for a little extra flavor.

They sure aren’t kosher, but these latkes topped with pork belly and pickled onions pack a lot of flavor into a small serving.

Okay, you get it. There are a lot of ways to play with the traditional potato latke and end up with a brown and delicious item cooked in oil. But laktes don’t need to be all-potato all the time. These latkes add beets and other root vegetables to the traditional potato to delicious effect. Or try latkes made with sweet potato, butternut squash, or zucchini topped with dill-flavored labneh or thickened yogurt.