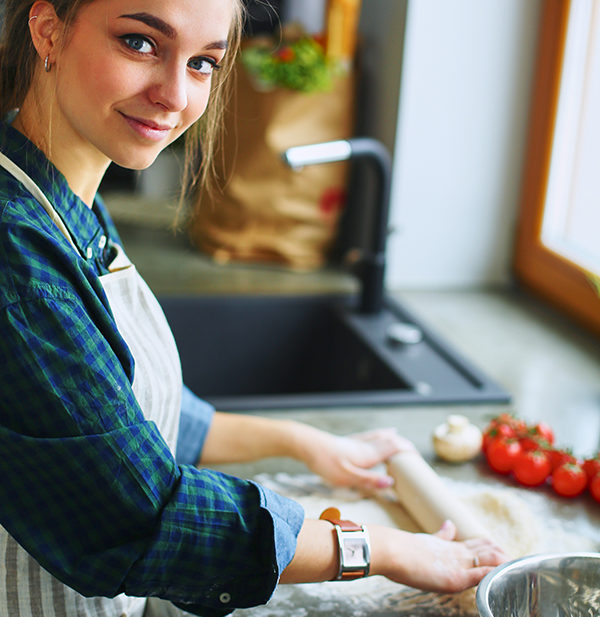 We usually eat dinner as a family, but my teenage son has a summer job that often involves him getting home after we finish eating. Sometimes he’ll eat leftovers, but he seems to like fixing his own food. Any suggestions for dishes to suggest to or teach him to make beyond his current rotation of pasta, bacon and eggs, or steak and salad?

It sounds like your son has both an interest and a solid grounding in basic cooking. That is great news for me in answering this question and for you in what I take to be your quest to raise an adult who is competent to feed himself—and perhaps someday others as well. Let’s start with meat. If your son can pan-fry a steak, then he can cook a pork chop or a lamb chop as well with just a little guidance on different cooking times to account for desired doneness, thickness of meat, and so forth. I think my next step with the basic single-serve cut of meat situation would be to show him a basic pan sauce or two. The magic of this move is that you’re giving him solid classic cooking techniques without him even knowing—all he needs to know is that tossing in a small amount of flavorful liquid (and maybe an aromatic or two) takes literally two more minutes and radically enhances the interest and deliciousness of the finished dish. The upgrade from dousing a steak with, say, A-1 or ketchup (not that I’m accusing your son of this, mind you) is a considerable step. If his interests run more to chicken and fish, he can easily do quick flouring or breading and pan-fry, then throw in lemon and capers or whatnot. That’s a simple, reliable technique that will serve him well for the rest of his life.

For a next step in complete meals, with vegetables even, look to that workhorse the stir-fry. Tofu is a great staple here; ground chicken or pork are easy and quick cooking, as are shrimp. I’d start off with veggies that cook fast and don’t require a lot of prep (asparagus, green beans, that kind of thing) and a fairly basic stir-fry sauce that nods to whatever you know his favorite flavors to be and let him play around from there.

I’m assuming, if your son can cook things like these, that he can also make extremely simple staples of kid cooking like, say, the grilled cheese. Building on those skills with putting together extras in a significantly more interesting pressed sandwich is a very easy next step, though possibly a little more expensive for you if he gets a taste for imported prosciutto and some kind of small-batch fig spread with fancy cheese. On the plus side, you can eat those too. Likewise, from bacon and eggs why not move to the omelet or a frittata? With pastas, give him a couple interesting new possibilities for sauces or maybe look at dishes based on different carbs—the pilaf, say, or the risotto. Getting him thinking about new ways to combine flavors and ingredients in basics he already knows and likes will build his confidence in the kitchen and let him take the reins—a key step for anyone, especially a teenager (if memory serves about my own slightly prickly youth).

In the past, I’ve had success with a couple of cookbooks in enticing my own teen and those of others to cook. Samin Nosrat’s Salt Fat Acid Heat covers flavor principles really well while being approachable and unintimidating. If you have the kind of teen who likes to figure out how things work and then experiment for themself, Michael Ruhlman’s Ratio is great. Back in the dark ages of cookery, I personally remember being fascinated with Julia Child’s The Way to Cook.

Depending on your teen’s bent, he may also be interested in cooking that’s a bit more of a project or challenge. In this case, I’d try to discreetly steer him to foods that can benefit the whole family—like, if he likes making things with his hands, why not ravioli or dumplings? That doesn’t answer the basic dilemma of him cooking for himself after his job—for that, he’ll obviously want something quicker and easier—but I am always a fan of benefiting, to the extent you can, from your child’s interests.

One way to do that might be to introduce him to the idea of slow-cooked dishes: soups, stews, braises, and that old standard the roast chicken. It’s not very seasonal at the moment I write this, in high summer, but if you have a slow cooker or Instant Pot, he might do with dishes that can be prepped before his job (which sounds like an afternoon/evening kind of shift) and then wolfed down when he gets home. Meanwhile, I suggest, you might do some wolfing of your own in his absence. Making a big pot of something like barbacoa or chile verde would let everyone have a taco dinner or a burrito when it suits them—and might even let him take leftovers to work when he’s not so hungry when he gets home.

A word of caution, based on my own teen, who decided she wanted to get into baking and has been led astray by many a recipe from Chef Google even though I tried to tell her that recipes found online are not always the best and I do, actually, know something about this: Your child may not take your very sage advice. They may, indeed, not be remotely interested in learning about cooking from you or may turn on you when something goes awry, much like David Rose trying to fold in cheese in Schitt’s Creek. That is fine and normal. It’s just food, and he’ll figure it out, and being a teen I assume he will be hungry most of the time and thus will probably eat his own mistakes, with no great harm to anyone. The one thing I would absolutely take as a hard and fast rule is this: Don’t ever, ever let him get away with not cleaning up the kitchen.