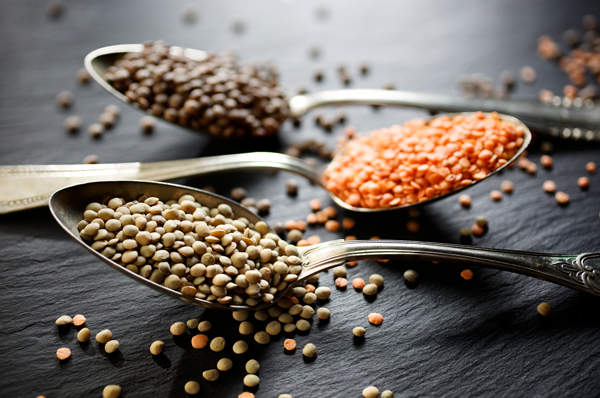 My extreme carnivore spouse and I are interested in trying to eat less meat, but we both need to eat a lot of protein for medical reasons. We are willing to try things like lentils, but we don’t know where to start with finding flavorful ways to cook extremely bland grains. Can you help?

—Not Exactly Against the Grain, but Skeptical

I get it. Legumes and grains seem like they take forever to cook. And when they’re finally done, you might just feel like you have a brown pile of something chewy (or sometimes a little crunchy). But that’s just the start: there are lots of interesting and flavorful ways to make plant-based foods more interesting and satisfying, even to extreme carnivores. (I am picturing that you are married to a T-Rex, beloved unknown reader, and I hope this is not the case. If it is, however, I advise you to stop thinking about grain cookery and immediately begin marketing your story.)

For starters, let’s sort out the differences and similarities between legumes and grains. Lentils, which you mentioned, are of course a type of legume, along with such things as beans (including the protein powerhouse that is soy), split peas, and peanuts. Legumes are higher in protein than most grains (the edible, carb-rich seeds of grasses, like wheat and barley). The problems and solutions for both are much the same.

If you want to start thinking about improvising (or just improving) grain- or legume-based meals, I suggest you capitalize on the tendency of grains and legumes to require long simmering. Add flavor from the outset, in the liquid. Make sure you’re salting the cooking water adequately, and consider using strong stock or broth (mushroom broth, for instance, adds incredible umami quality) when cooking grains. You can also build in flavor from the get-go with grains by sautéing a little shallot or garlic or other aromatics at the beginning of cooking; with many grains, you can toast the kernels themselves to build depth of flavor.

Cooked grains and legumes will also absorb flavor, so look for recipes with a zippy dressing, marinade, or sauce, plus other add-ins to avoid blandness. Examples: a flexible grain bowl with turmeric cauliflower and pan-fried halloumi or a farro bowl with tahini-miso dressing; kale-quinoa salad with mustard dressing (hey, paging What the Kale). By the way, if you’re typically meat eaters and your spouse would be shocked and appalled by a sudden change to an all-plant diet, you can always ease in with using meat (especially flavorful cured meats and sausage) as more of a seasoning in soups, risotto-like preparations, and so on—an especially time-honored solution with legume soups (split pea and ham, for example).

To build dinners around grains or legumes, try batch cooking them and freezing for later use. You don’t say if you’re busy people, but you are alive in 2019 and thus I assume you are busy people (or, busy person and one busy T-Rex). If you have an Instant Pot or pressure cooker, you can cook up lots of grains fast, but you can also do this on the stove slowly, on weekends, and then refrigerate or freeze them in dinner-sized batches for quick use later. This works well to turn them into soups, salads, or grain-based main dishes like fried rice, which is something I like to make with all kinds of grains—in part because this dish uses up leftovers like nobody’s business, and I am all about using things up.

My basic fried-rice-or-whatever-grain formula is as follows: saute something flavorful (bacon is great if you’re eating meat, shallots and minced garlic and ginger and chiles are also good) and toss in your grains until they’re toasty. Douse with soy sauce and cook until it’s absorbed. Throw in your other stuff—cubes of tofu, chopped vegetables, greens, whatever—in order of how long they will take to cook or heat through. At the end, scramble in one egg per person. I like this with sriracha on top. Note: some grains will pop out of the pan (cough, quinoa, cough) so you may want one of those screen tops.

You say you need lots of protein. Legumes have many times more than grains. Quinoa and some other grains have decent amounts. In general, most grains will top out at about 5g of protein per serving; you can get more protein from legumes, add other plant-based proteins like tofu to a dish, or—always—put an egg on it.

I know it’s still March, but spring and summer are coming, and I think that’s a great time to incorporate more grains in your meals, especially in salads like this delicate farro and asparagus combo. They’re easy to improvise with seasonal produce, satisfying, and as vibrantly flavorful as your chosen dressing can make them. You and your T-Rex will get acclimated to more plant-based dinners in no time.

If you want to dig deeper, I would start with the cookbook Greens + Grains: Recipes for Deliciously Healthful Meals, by Molly Watson (full disclosure: she edits this site—bring on the brownie points!) or go with Paula Wolfert’s classic Mediterranean Grains and Greens: A Book of Savory Sun-Drenched Recipes.