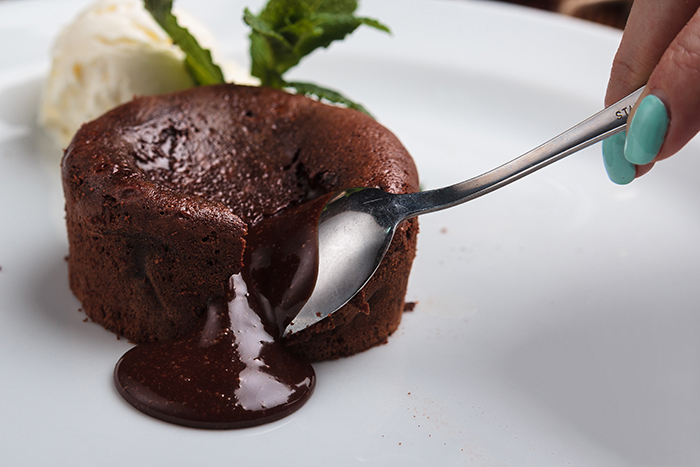 Twice now I’ve made “gooey” chocolate cake recipes requiring a mere 1/3 cup of flour and many eggs. I always bake them longer than the suggested time and still I worry about the center being undercooked instead of ending up with the gooeyness I was promised.

If I were to double the flour, would I be rewarded with a cake that looks more like…a cake…in the middle, and still remain mostly loyal to the recipe’s intention?

—Recipe Alteration: A Piece of Cake?

Ah, baking alterations, the bane of any would-be kitchen witch’s existence. While it’s easy and fun and relatively low-stakes to play fast and loose with cooking, baking is so often another story: more precise, easier to mess up, dependent on chemistry equations we mere mortals (even if ever so slightly magical) only dimly understand.

Without knowing the exact proportions and recipe of your gooey recipe, I can’t say for sure what you will get, but I can say that upping the flour will definitely change the recipe’s outcome. I think you’re more likely to get something that looks like a basic from-scratch brownie made with chocolate rather than cocoa powder—so, a little sticky and gooey inside, possibly with a shiny top, but not a cakey texture surrounding a semisolid center. The formula I know best for that is still my fave: the one that was printed on the box of unsweetened Baker’s Chocolate brand cubes in my youth. It has 3 eggs, 1 cup of flour, and bunch of melted chocolate and butter (plus, of course, sugar). A similar formula, albeit with much less flour, has become known as Katharine Hepburn’s brownie recipe. I’ve upgraded my chocolate choice but I continue to be happy with that one-bowl recipe, which is frankly as quick as a mix. (I have Opinions about brownie mixes, namely that they are unnecessary and always taste powdery and faintly chemical and I want my brownies made with chocolate, not cocoa.)

Please note that though it appears I have wandered slightly off track from the question of gooey cakes, distracted—as I am wont to be—by brownies, I will say that it’s always possible to pass off brownies baked in a round pan and sprinkled with powdered sugar as a sophisticated, rich little chocolate cake. Nobody has to know the recipe originally said brownie. But! Back to your actual question. If your cake formula is of the molten or lava variety, made popular over the past few decades in the wake of Jean-Georges Vongerichten’s introduction of the dessert, upping the flour and baking longer will set the center more but may make the texture too cakey or thick when fully baked. That said, if you want to try a chocolate dessert that can be either molten or cooked through, this boozy little numbermay be what you’re after. (You can swap out the kinds of liquor.)

I wasn’t completely sure, from your letter, whether you dislike the gooey/liquidy chocolate center for textural reasons or health ones. If it’s the latter, and your concern is that the eggs may be left undercooked, I’m sympathetic to the issue—my spouse happens to be permanently immune suppressed so has to avoid raw eggs. This saddens me, as I love many desserts and dishes with raw or undercooked eggs. For baking, you can use liquid egg products, but you can also find pasteurized whole eggs, which are like a miracle of science. They are produced to be safe to eat but still fully liquid in the shell through a patented process, and in the U.S. are sold under the brand name Davidson’s. You can also use an instant-read thermometer to check the temperature to which your cake is cooked: 160ºF/71ºC is the threshold you want to reach.

If your objection is more textural—that is, you don’t like the liquidy, soft-set whoosh of unbaked batter that emanates from such a cake—I would suggest looking for recipes that go more toward “fudgy” in their description, like this soignee little chocolate-pear-hazelnut number,rather than “gooey.” I suspect you’re going to find that things originally intended to be gooey will veer toward stodgy or dense if they are baked through or if you up the amount of flour.