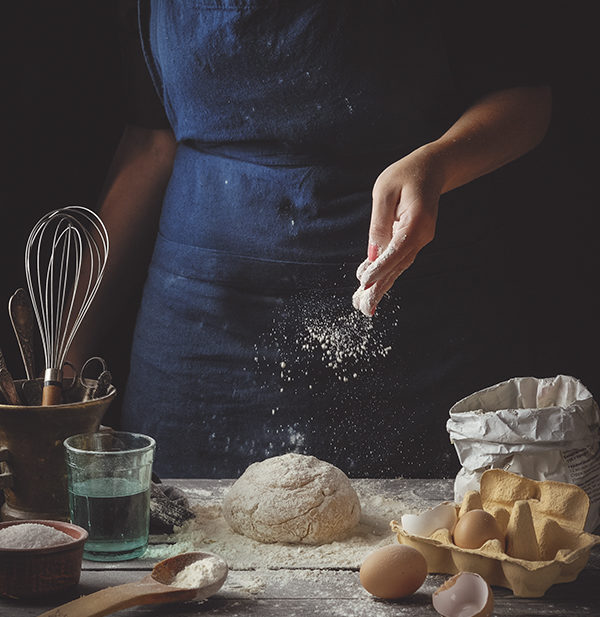 Ugh, I don’t want to go to the store and I’m almost out of regular flour, but I want to bake a treat for our fantastic babysitter. For some reason I have bread flour. Can I substitute bread flour for part of the all-purpose flour in blondies, which is what I was thinking of making? Do I need to make any adjustments when substituting flour? I really don’t want to have to take my baby to the store right now.

You can absolutely sub bread flour in a treat like blondies, though you may want to try a couple of other minor adjustments. It’s probably good news, though, that you still have a little regular flour left. Bread flour, as you probably know, has more protein content than all-purpose flour; that’s what makes it good for bread baking. The protein in wheat is the gluten, which makes it springy and elastic in bread, allowing the bread to get a great rise (when the air released by yeast inflates the stretchy gluten network), a stable structure, and a chewy mouthfeel. This is, however, the opposite effect of what you want in a cookie or cake, where tenderness is the goal.

Bread flour absorbs more liquid than all-purpose flour, meaning the biggest risk here is that your blondies will be a little dry and dense or chewy. There are a few possible fixes for this. First, I’d suggest nudging the fat content up just a little bit—a tiny extra bit of butter or additional egg yolk. Second, go easy on your stirring or mixing; the more you mix after adding the dry ingredients, the more you will develop that gluten network. Third, you can try making your addition of flour just a little bit scant—meaning if you’re adding a cup of bread flour, measure the cup out so it’s a little shy of a full cup, to compensate for any dryness. If there’s a liquid in the recipe, you can also add a little bit extra, or you can put in an extra slug of a liquid that’s not called for. (Rum or whiskey would be good, if your babysitter wouldn’t be too shocked; a bit of coffee or tea would also add a different, extra note.) You don’t have to go nuts with adjustments: bread flour contains just an extra one percent of protein as compared to all-purpose, so it’s not a huge differential, but some subtle alterations will help

You might also consider scrounging around the baking cupboard to see what else you have in the way of alternate flours. If you have cake flour, for instance, you could split the substitution between that and bread flour. Cake flour is much lower in protein and will produce a tenderer, weaker structure in your finished dough. Likewise, if you have gluten-free flour on hand, that will (obviously) not add gluten to the dough.

Happily, blondies and cookies are likely to be pretty forgiving. I wouldn’t suggest playing fast and loose like this in a genoise or some other highly technical baked good, but a bar with a lot of brown sugar and butter in it is going to taste good almost no matter what you do. I’d keep a close eye on it in the oven and consider underbaking it by a couple of minutes, to further avoid the risk of it drying out. Finally, if you’re concerned about toughness or dryness, may I suggest adding a boatload of something like toffee bits, butterscotch chips, chopped chocolate or chocolate chips, chopped dates, or something else that will amp up the gooeyness factor in your finished dessert? Your babysitter will be delighted—and I hope your baby is enjoying a nap while you don’t go to the store.