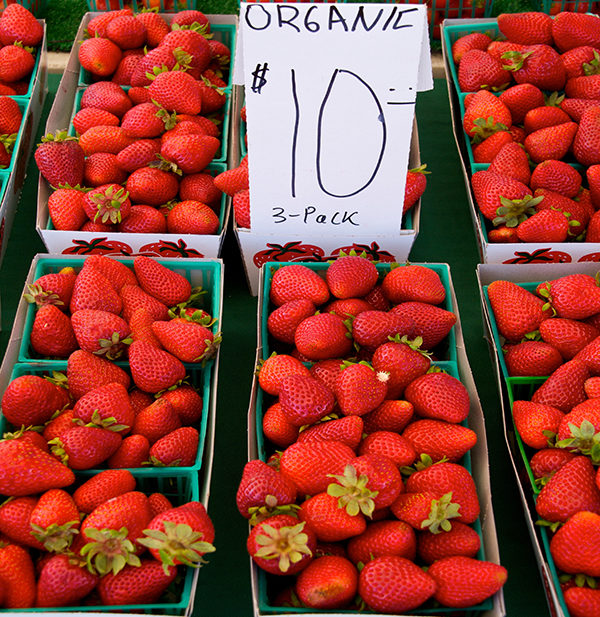 Strawberry season where I live is in full swing and I am often tempted by the big flats of them at the farmers market. I’m always thinking I’ll make jam, but then when it’s time to boil big pots of water and get my kitchen all sticky on a summer day, I never seem to want to. I feel guilty letting all the berries rot. What can I do to salvage them—especially berries that have gone a tiny bit past their prime?

Ah, I sympathize. The spirit is often willing but the flesh weak when it comes to canning fruit in the height of summer. My particular jam-oriented Achilles heel at the farmers market is the apricot, but the bounty-inspired impulse and its slow fade in the face of reality are much the same.

I grew up in a farm town, in a farming family (we grew and grow almonds but had a section of fruit trees and a big garden for family use), and my grandmother Put Up Fruit in an un-air-conditioned kitchen every year. She had one of those storerooms lined with gleaming jars that I picture when I read about larders and pantries in old novels, and there was even a family legend that she had buried crocks of homemade fruit brandy in the garden and forgotten its precise location. We never found it and she died in 1977, so this may just be apocryphal, and in any case, I don’t suggest this path to you. (If the later owners of her house found it, though, I hope they really enjoyed it.) However, it does lead, in a roundabout fashion, to my first suggestion for you: drinks. Making beverages and beverage bases requires little or no cooking and will pay off by preserving all that lovely fruit flavor for refreshing drinks throughout the summer, instead of overheating you for the sake of jam. (Do note, however: you can cook the jam and freeze it instead of can it, which minimizes the number of steaming pots you need to tend; you can also hull and freeze the berries and do any canning when things cool down.)

When life gives you strawberries, one approach is to make strawberry lemonade (you can make this into a concentrate and freeze it for future use) or, for a kick, sangria with rosé. If you want to get a little more elaborate, I strongly suggest a batch of shrub. If you aren’t familiar with the term, shrubs are tart fruit- and vinegar-based syrups, which have been enjoying a bit of a renaissance of late. Popular in colonial America, they’ve now found a happy home on hip cocktail menus and also make great, more-interesting-than-average nonalcoholic drinks when added to sparkling water or other concoctions. Strawberries pair very well with basil in a strawberry-basil shrub to make a sophisticated but extremely easy syrup to dress up drinks, drizzle on ice cream or even use in a salad dressing—perhaps with more strawberries, some peppery arugula, and a bit of burrata cheese with plenty of cracked black pepper? Shrubs can last a full year in the refrigerator—enough time to get you to next year’s strawberry season.

My mom, who married into the farming family and fruit preservation situation mentioned above, had a different approach to canning: she simply did not do it. Instead, she bought a 70s contraption called a Seal-a-Meal and she froze fruit. Typically, she sweetened it, and sometimes cooked it depending on the intended use, before freezing in flat oblong bags. Happily, in these latter days of widely available plastics ruining the planet, you need no gadget; simple ziplock bags will do. I would likely macerate berries in sugar (not too much) and/or lightly crush them, then siphon into bags and freeze flat (be sure to label). This rough strawberry puree will be ready to use in future in homemade strawberry ice cream or a classic strawberry fool, smoothies, cocktails, or just as a sauce on top of creamy things like panna cotta or yogurt. Or, just make a strawberry puree into popsicles right off the bat.

I have a bias against cooked strawberries, with just two exceptions: in jam, which we know you aren’t making, and when cooked with rhubarb in pies. You could make a strawberry-rhubarb compote to freeze, as well, though the rhubarb season has mostly waned where I am. If you can’t let go of the dream of jam, I’d do freezer jam, which is just a more cooked, more sweetened version of the rough puree described above. Because of that bias, I tend not to do a lot of baked goods with strawberries, though a friend swears by simple butter cake with ripe strawberries baked on top, or you can tuck them into pancakes with ricotta. There are also plenty of ways to use strawberries in salsas and salads.

For fresh uses, I suggest getting yourself invited to a potluck and using a lot of strawberries for pies or shortcake. When I say strawberry pie, I favor an open-face pie with raw berries, not a baked type. What I do for a strawberry pie is to make a crust (graham cracker, shortcrust, or a sweetened press-in shortbread style all work just fine here, as does store-bought if that’s how you would rather roll), fill it with a cream made from whipping cream, cream cheese, and powdered sugar all whipped together (I’m not proud), and put as many strawberries as I can cram on top. If you are in the U.S. and go to a Fourth of July party, you can go on theme very easily by throwing on blueberries. Canadians, on the first of July, may wish to execute a real power move by placing the strawberries in a maple leaf shape.

Finally, may I suggest modifying strawberry shortcake for breakfast? Biscuits are, after all, a classic breakfast food, and if you swap out the whipped cream for skyr or a thick yogurt you’ll get a good dose of protein in. Or just stick with whipped cream; I won’t tell anyone. It’s summer, after all: anything goes.