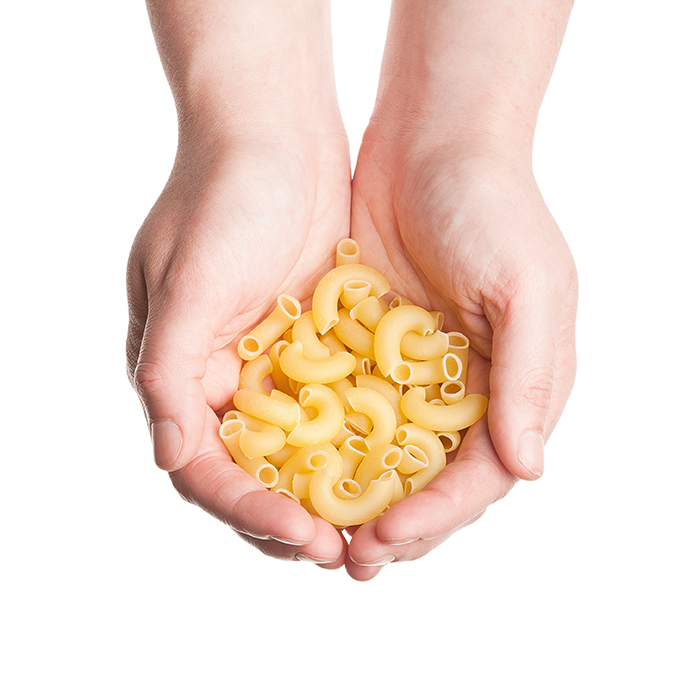 What do you do with leftover pasta?  I have several recipes that call for 12 ounces, but it comes in 1-pound boxes, so what should I do with all the random pieces that are left?

I have a very small proportion of Italian heritage, which officially qualifies me to answer this question, and I’m going to be completely honest with you: just mix them. Would Marcella Hazan turn in her grave? Very possibly. Is it something that an awful lot of thrifty Italian nonne have probably done over the generations? Absolutely. I’m not one to throw out a quarter box of pasta, so I do it fairly often. I’ve even been known, in a pantry-cleaning frenzy, to combine a bunch of similar-sized pasta shapes in a glass jar just for the pleasure of getting rid of several boxes at once.

That might be a bridge too far, but mixing the types works can work especially well in a one-pot meal or a baked-pasta setting (mac and cheese, whether fancified or not, baked ziti but not actually with ziti, that kind of thing) where the precisely al dente texture of the pasta is less of a deal.

I cook all my pasta ends together: big pot, salted water, put the longest-cooking kinds (bucatini, farfalle, rigatoni) in first, followed by thinner types a couple minutes apart. My kids in particular enjoy what they have been known to call “crazy pasta,” especially with a simple kid-friendly pasta sauce. Speaking of which, this not particularly inspired but I tend to make what I think of as mom pasta—butter, parmesan, and a tiny splodge of cream if I have it on hand—as an easy side dish, like my mother did before me. That’s a great use for a quarter box, especially because that’s mostly for the kids while I, a middle-aged lady, try to stick to the proteins and veggies (but obviously usually can’t resist a few bites of generously buttered noodles, sprinkled with just a quarter cup of parsley for color and freshness, as Craig Claiborne taught us).

If you are a pasta purist and cannot abide the idea of mixing everything up, you can always fall back on the basic side dish, but I do have other suggestions. These will also work if your pasta types are incompatible—say, angel hair and orzo and lasagna noodles, which even I can imagine would make an uneasy pairing. The top one: soup. Throw that pasta in any soup of the minestrone variety (even if the recipe doesn’t call for it! It’s okay!). It doesn’t have to be soup or stew in an Italian vein, either. Chicken or veggie noodle, kao soi, chili mac, a comforting Mexican sopa—these are all noble uses for whatever shape or type of pasta you like and choose to put in them. If your leftover pasta is long, like the aforementioned angel hair, break it into short pieces. If it’s weirdly shaped or huge like a lasagna noodle, put it in a ziplock bag and pound it into shards with a mallet. I just realized that quite a few of my use-it-up suggestions involve a certain amount of violence, which happen also to be great for dealing with the frustrations of living under late-stage patriarchal capitalism.

Bits and bobs of pasta are also really good for your weekend lunch. In grad school I used to make two cheap-and-cheerful pasta sauces with oil-packed tuna, either of which I would recommend for this use. One is red: saute a bunch of garlic in the tuna-y olive oil, add some anchovy paste and tomatoes and the can of tuna, and simmer with a ton of black pepper. The other is green and only barely cooked: gently saute some garlic, then add minced jalapenos or serranos, the tuna, lemon juice and zest, and a metric ton (or to taste) of chopped flat-leaf parsley. Toss with the hot pasta and a little cooking water to loosen it up and some parmesan (yes, even though cheese is usually Not Done with fishy pasta sauces).

If you make packed lunches to take to work, I’d also consider salads that to use up the shorter, stubbier shapes. Personally I think pasta salads are often too pasta-y and I like one that has a lot of other things and only a little pasta. A good idea here would be, say, a caprese (once summer hits) with some pasta stirred in to bulk up the salad, or a salad with white beans and crunchy vegetables and ribbons of prosciutto and a bright, lemony dressing. Small pasta shapes can stand in for pearl couscous or other called-for shapes. Basically, there are no rules! Let chaos reign in your pasta pot and on your dinner table! Or, at least, introduce a little deliberate chaos to rid your pantry of all those mostly empty boxes.