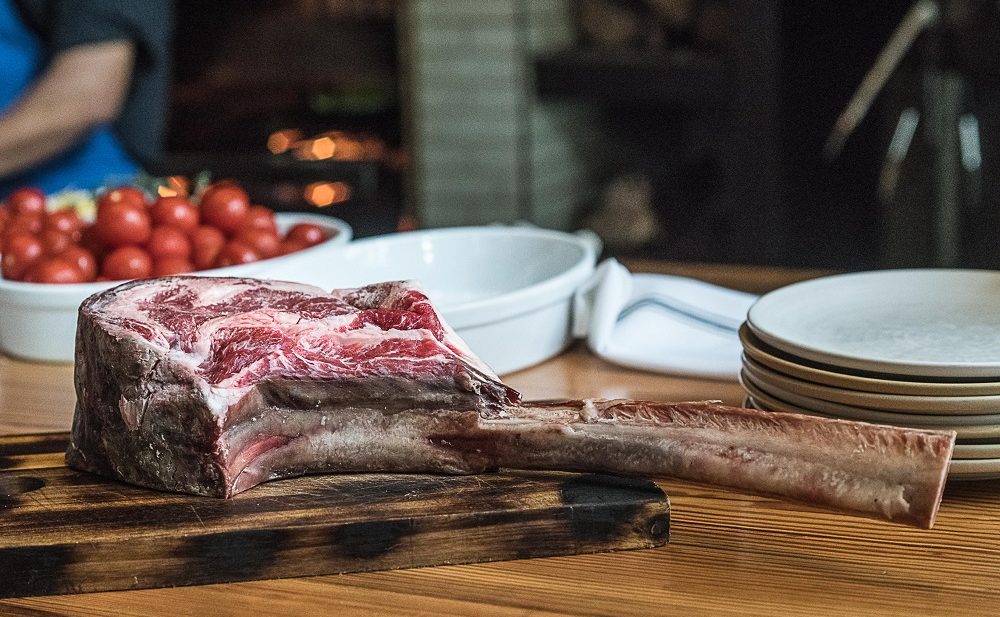 You are here: Home / Home Cooking / How to Temper Steaks for the Grill

An easy trick to make the perfect steak.

Picture if, you will, in your carnivore’s eye, the last steak that made you question whether you’d ever really had a steak before. Sizzling before you, bearing the brand of the fire. Ringed with burnt-amber fat. Not fork-tender, but firm—demanding the knife. Your first cut parts an artful spectrum of caramel to pink, assuring that each bite would deliver the holy trinity of crust, jus and seasoning. You remember pausing for a moment to drink it all in. And so it was. Your perfect steak.

The steps to such perfection are several: careful sourcing, mastery of fire, meticulous seasoning. Just as important to delivering an immortal steak is a primary step oft forgotten by home chefs, one that can make a world of difference in the result. This step is called tempering.

“Tempering is the most important thing we do to meat, period,” says Chef Rubén García, culinary creative director for the José Andrés restaurants.

A large part of the live-fire training of José Andrés cooks doesn’t take place over the grill, but in a holding area where they continuously monitor steaks that are on deck, making sure their internal temperatures rise to exactly 95 degrees before their turn on the heat.

“In Spain we cook large cuts of meat, often two inches or more thick,” stresses Chef Rubén, “Tempering both loosens the muscle and gets the whole cut to the same temperature before cooking begins. That way we get the perfect sear, tenderness and even pinkness through to the center.”

Tempering is key in many disciplines. In metallurgy, steel strengthens through simple heating and cooling. Molecules bind into harder bonds. When tempering’s effect on the metal was discovered, it enabled better weapons and tools and taller buildings. Tempered speech is that which brings opposing ideas together. It loosens people from their hard positions. Relaxes what was tight. Hardens what was soft. But whether warmer or colder, tempering is always a preparatory manipulation of temperature to get a better result.

Chef Greg Denton and wife, Chef Gabrielle Quiñónez Denton, James Beard Award winners for their Portland restaurant Ox, are legendary for their large primal cuts. But those aren’t the ones that worry them most:

“Obviously our thickest steaks get the most press, but we probably spend more time considering our handling of grill cuts one inch or thinner. The fire at Ox is so hot that if we warm-temper a skirt steak it’ll be overdone in a second. So we keep them cold right up to cooking. Refrigerator cold.”

Psst—it might sound counterintuitive, but thick steaks, tempered correctly, are far more forgiving, with far more potential for greatness, than thin. Buy the huge steak and carve for several.

Growing up in my family home it was hard to miss Dad’s dinner signals. A four-bone pile of bleeding rib steaks in the sink meant “we’re grilling.” A full three inches thick, these marvels anchored a kitchen island still life wreathed by knife, cleaver, salt and garlic. And all day they’d sit there. All day.

But now, knowing what I’ve learned from my own tinkerings and from the those of the wildest professional kitchens, I realize he was doing more than simply un-freezing; he was warming them all the way up to room temperature, near what I now know as the tempering range. Employing a secret weapon I didn’t have a name for until much later.

Warm tempering is ideal between 75 and 95 degrees Fahrenheit. If your kitchen’s ambient temperature rests much lower than that, there are plenty of ways to cheat centers to the right range. My preference is to heat an oven to 150 degrees, turn it off, then leave the defrosted steaks in there for about 30 minutes. Another option is a zip-top or vacuum-sealed dunk in hot water (don’t directly soak the meat or you’ll damage the texture). Don’t use a microwave—strange things happen in there. When you’re done, use a meat thermometer to see if you’ve arrived—or if, like me, you’re a “by feel” person, pick up each steak by one end. If it elongates easily and readily, you’re ready to go.

Even if you’re an advanced griller and already in the habit of starting with room-temperature meat, try a little warmer, say 80–90 degrees. Steaks will finish faster, more predictably and as a bonus their relaxed texture will accept pre-grill seasonings far more readily.

So if your entire day before the evening’s grill session is focused on prep (mine is), if you focus so completely on the meat at hand that you make your guests bring all the sides and drinks (I do), if you find yourself concerned about what order you salt it, pepper it or drizzle lime on it (yes—me again), then for god’s sake, temper it.

Don’t let a handful of degrees keep you from your perfect steak.