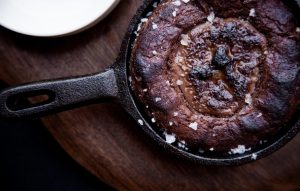 You know your cast iron skillet is a workhorse. It’s cookware that’s inexpensive and durable. The heavy material retains a ton of heat, making it perfect for searing steaks and burgers. A well-seasoned cast iron skillet is naturally nonstick, so it’s a great choice for egg dishes, like a frittata.

Most home cooks reach for it when they are making something on the savory side, but cast iron can be just as useful for baking up dessert. It turns out wonderful brownies, giant cookie-cakes, cobblers, and more.

But before you start tonight’s baking project, let’s review the basics of caring for that cast iron. You don’t want to face the heartbreak of a cake that sticks and breaks apart because your skillet wasn’t properly seasoned, after all. If you have any doubts about the coat of seasoning currently on your cookware, start by giving it a good wash and drying it well. Meanwhile, heat the oven to 450°F.

Put a few drops of vegetable oil (like canola) in the pan and rub it in, then rub with a paper towel to leave only the thinnest film of oil behind. (It shouldn’t feel even slightly greasy.) Place the skillet in the hot oven for 30 minutes. Turn the oven off, and leave the pan inside to cool. It’s best to do this the day before you want to bake. Repeat it every couple of months to keep the seasoning layer shipshape.

Confident in your seasoning? Great. Let’s do this.

Somewhere between cookie and cake lives the Cast Iron Chocolate Chip Cookie. This one combines semi-sweet and bittersweet chips with caramel pieces for a slightly different twist on a classic. Serve wedges of this straight from the skillet, still warm, before topping with a scoop of vanilla ice cream.

Strawberry and rhubarb co-star in plenty of terrific desserts, but this Strawberry Rhubarb Skillet Cobbler must be one of the easiest. It’s fruity, sweet, tart and buttery. Orange zest cuts the richness of the biscuit topping.

This Tarte Tatin has an air of refinement that belies the fact it was turned out of a rough-hewn skillet like cast iron. The metal’s magnificent heat-retaining power makes it perfect for caramelizing the apples, a signature of this French dessert. Starting with thawed frozen puff pastry makes it easy.

Calling all banana bread lovers: This Cast-Iron Skillet Banana Cake has everything you love about your favorite snack cake, and then some. A touch of cinnamon brings some warming spice to this cake that would also hit the spot as a snack with an afternoon coffee or tea.

You’ll never need marriage counseling if you can bake cinnamon rolls. Really, the next time your partner or really anyone else is annoyed at you for any reason, give them some space while you make these extravagantly frosted Skillet Cinnamon Rolls. All will be forgiven. Isn’t that better?

Also known as German Pancakes, Dutch Babies are just as carby as regularly pancakes but bigger, and much more fluffy and puffy. This Cast Iron Skillet Dutch Baby will show you how it works. Just like pancakes or crepes, Dutch Babies can be topped with either sweet or savory ingredients. The classic finishing touches are melted butter, lemon juice, and powdered sugar.

The edges are clearly the most popular bites of brownie. When you bake a batch of these Skillet Brownies, made from 99% dark chocolate chips, you’ll get a ring of particularly crusty edge bits. Don’t worry if the top chars slightly—that burnishes the complex flavor of cocoa.

Before you start baking, make sure you’ve given your skillet a thorough washing with soap and water. It’s a myth that you shouldn’t wash your cast iron. And if you don’t wash it well, your sweet treats could end up having a hint of onion or whiff of garlic. The seasoning can definitely stand up to some suds. Just don’t take steel wool or another abrasive scrubber to it, and you’ll be fine.