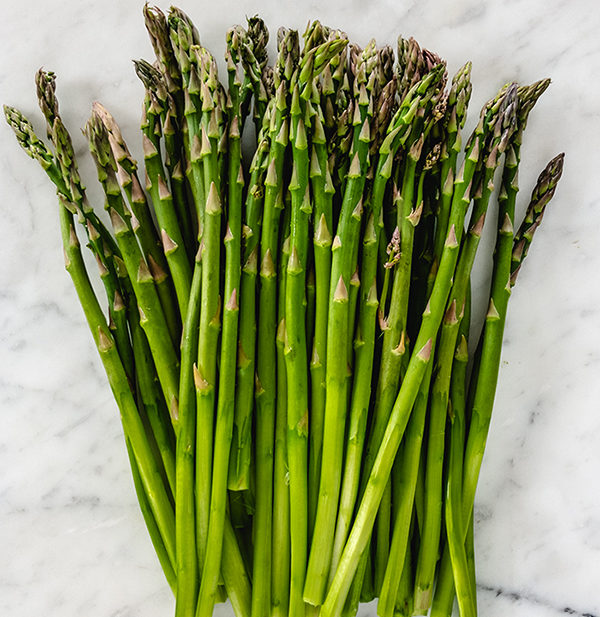 You are here: Home / Home Cooking / A Case for Peeling Asparagus

Why peeling asparagus beats breaking the stalks of spring.

Most asparagus recipes have you start by snapping the stalks—holding either end of the stalk and bending it until it “breaks” at its natural point. Such bending and breaking lets you quickly rid yourself of the tough, woody ends of asparagus without sacrificing the tender tops. It’s a better method than randomly hacking off the bottoms of the stems, for sure. It’s also a fairly quick process, even if every stalk needs to be snapped individually.

The downsides to snapping? To my mind, there are three. First, it’s not always super accurate, particularly with very tender asparagus—the natural breaking point may take away some of the tender stalk. Second, it’s pretty wasteful—much of the bottom of the stalk can be rendered wonderfully tender if you take the time to peel the stalks. Third, it ain’t pretty. Rustic, sure. Quick, absolutely. Even and elegant, not at all.

To get the most asparagus out of a bunch and have it looks it’s best, you need to peel those stalks. It takes some time, but it doesn’t tend to be too painful. Note, the skinnier the stalk, the more of a pain it is. For super slender asparagus, opt for the quicker, less pretty snapping method. The thicker the asparagus, however, the more it benefits from peeling and the more asparagus you don’t end up wasting.

How to peel asparagus in 3 easy steps

1. Start by chopping off the very ends of the stalks in one go with a big knife. Use your best judgment, but you’re just getting rid of the very end that tends to be a bit dried out after the asparagus has made its way from the field to your kitchen. 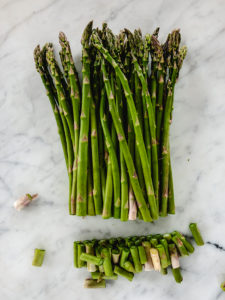 2. Working with one stalk at a time, lay the asparagus flat on a work surface and use a sharp vegetable peeler to peel the lower half, turn the stalk as needed to peel it all the way around. 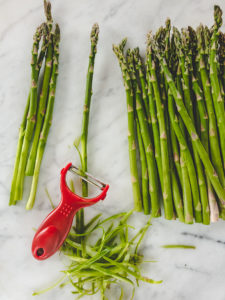 3. Repeat with the remaining asparagus spears. You’ll have a feathery pile of peel to toss in the compost or throw away, and an even bigger pile of beautifully asparagus stalks, all grassy green on top and a lovely pale yellow-green where they’ve been peeled. Painstakingly, perhaps, but to lovely effect. 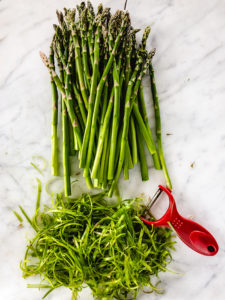 How to use peeled asparagus

You can use peeled asparagus in any asparagus recipe. Note, that you will end up with more useable asparagus that by snapping, so if exact amounts are necessary, keep that in mind. That said, because of the effort involved, I don’t tend to bother peeling asparagus unless the pretty result will show up in the final dish. So, if I’m making a quick weeknight asparagus soup, for example, I’m going to snap those stalks.

If however, I have company coming and we’re roasting asparagus, I’m likely to spend a bit of time beforehand peeling it. The same holds true for grilling or steaming—when the whole stalks are being served, peeling makes the most of things.

Middle ground cases abound. When the asparagus is stir-fried, for example, or used raw in a salad. If the stalks are getting chopped but served, peeling still maximizes the amount of asparagus you have to work with, even if the pretty effect is more or less lost.