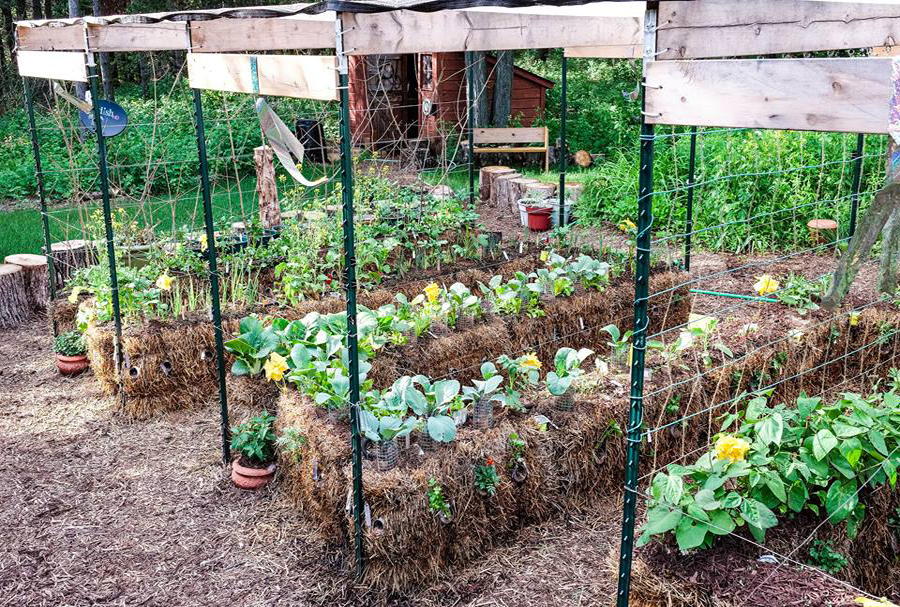 Horticulturist Joel Karsten began growing bumper crops in straw bales after college. Today, this bestselling author’s method has proven successful in nearly every global environment. He even teaches people in impoverished nations how to grow their own produce in straw.

Growing up on a farm in Minnesota, Karsten noticed plants that germinated in straw bales grew better and stronger. “I always thought, why don’t people just grow things in there?” Karsten says.

When the soil surrounding his first house in urban Minnesota wasn’t good for growing, he experimented with planting in straw bales. His garden thrived. Word got out about his successful, out-of-the-box agricultural innovation. Demand for more information drove him to write a book, while a Facebook page and website prompted interest from around the globe.

His method proved successful in the most unlikely of places, from Nordic countries and the deserts of Egypt, to right here in the Sierra Nevada. Published in 2013, Straw Bale Gardens is now printed in more than 20 languages, and Karsten states that it’s the top-selling gardening book on the planet.

He says straw-bale gardening can be done practically anywhere, even in small spaces, as long as the bales are stable. Overwatering is difficult, as the bales are natural filters, but bound bales also retain moisture well in dry climates. They generate their own warmth when properly prepped, allowing for longer growing seasons and more plant production.

Since garden weeds largely come from seeds existing in ground soil or manure, the need to weed is dramatically lessened with straw bales.

It’s also an inexpensive, less physically taxing way to garden. Bales usually cost $15 or less each, and this method requires only water, seeds or seedlings, fertilizer, and some potting soil. Raised off the ground and lighter than soil, bales also are easier to tend and transport. 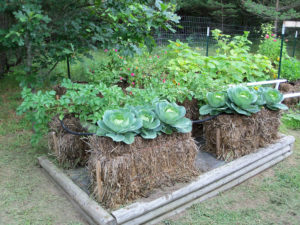 To get started, pick up some inexpensive straw bales at a local livestock store or gardening center. Before planting in them, bales must go through a conditioning process for about two weeks. In general, you need a 10-hour-long day to start straw bale gardens.

Sprinkle fertilizer on the top of bales, then add a gallon of water to kick off the conditioning. Organic blood meal is preferred, with alfalfa- or soy-based fertilizer recommended instead for vegans. Chemical, aka refined, fertilizers work as well. Just make sure whatever you use doesn’t contain any herbicides.

On day one of the conditioning process, Karsten tops bales with two cups of organic — or half a cup of refined — fertilizer; he then repeats that on days three and five. Then on days seven and nine, he cuts the fertilizer amount in half. After every treatment, one gallon of water is poured over the top, allowing the nutrients to trickle through the bale. Avoid overwatering, which flushes nutrients from the straw.

Bales will begin to warm internally to about 150 degrees as the bacterial colonization encouraged through fertilization transpires.

On day 10, Karsten adds one cup of fertilizer with equal — or closely balanced — parts nitrogen, phosphorous, and potassium, again adding water. He then allows the process to complete for about two days, or until the bale is tolerable to reach into and touch. Get a compost thermometer at your local nursery to ensure you’ve reached 90 to 100 degrees, the temperature range necessary to begin planting, but your hand also is a good gauge.

Once properly conditioned, bales naturally generate heat. Their internal warmth protects roots from cold, resulting in strong, hardy root systems, even in chillier climates. After two years of use, bales can be composted.

Once conditioned, add a thin layer of fresh, soil-free potting mix, such as peat moss, to bale tops, then plant either seeds or seedlings. Karsten suggests topping the bales with a drip-irrigation system or a less pricey soaker hose to keep them well hydrated and disease-free. But forego dousing the foliage; wet leaves are Petri dishes for disease and fungus.

For curious novices, Pawl Hollis of Rail City Garden Center in Sparks, Nevada, suggests they “keep it small and simple. It’s so simple to be successful.”

In his years of experience, he has enjoyed great success with growing vining plants such as cucumbers and squash; rooting vegetables including carrots, beets, and sweet potatoes; and upright plants such as tomatoes and peppers. Experiment, though, as these self-contained gardens welcome many other plants and herbs, too.

For cold snaps, Hollis recommends getting and using a frost cloth versus covering plants with plastic, which he says can cause more freezing. Plant uprights and vining plants no earlier than March, depending on your climate, and have foliage protection from the cold available, as these plants are frost intolerant.

The number of plants per bale depends on both bale and plant size. Grow more in a single bale by staggering plants of differing heights. For instance, taller plants such as tomatoes can benefit shade-loving growth below, such as basil, and carrots can grow within the same straw.

Understand that hybrid plants will have far larger foliage structures once grown than heirloom varietals, so think ahead and plant accordingly.

Simplify your gardening and surprise your neighbors this season with a straw-borne harvest. You may never go back to soil again.

For details about straw-bale gardening from horticulturist Joel Karsten or to purchase Straw Bale Gardens or any of his other books, visit Strawbalegardens.com.

*This gardening story comes to us from Edible Reno-Tahoe.