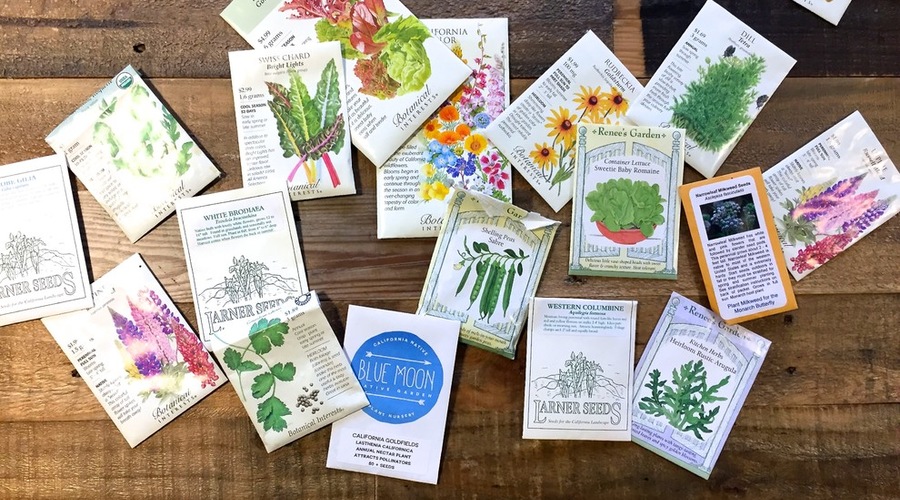 You are here: Home / Garden / How to Read a Seed Packet

Seed packets tell you all you need to know to get planting.

Sowing seeds is an easy and inexpensive way to get a garden going. Make the most of your experience by starting with an in-depth look at what your seed packets can tell you. Then, when it’s time to start sowing seeds, either indoors before your final frost date or outdoors when the soil is warm enough, you’ll be ready.

Even as winter retains a grip on the garden, signs of spring, in the form of seed packets, begin to fill the racks at nurseries, garden centers, home improvement stores and even grocery stories and pharmacies. Their bright illustrations promise a spring and summer of fresh flowers and vegetables. They also give you far more information than you might expect that can help you decide what to grow.

At first glance, the front of the packet will give you the basic information that lets you know exactly what will grow from the seeds in each packet. Most prominent will be the common name of the plant, whether it’s a cosmos or a cucumber. Along with this, you’ll also find the specific variety of this particular plant, such as Sensation cosmos or Armenian cucumber.

Often, the botanical name will be less obvious. If you’re only growing vegetables, the botanical name is not critical. However, if you’re interested in ornamental plants, it provides one more way to check that what you’re buying is what you want to grow. There are a number of decidedly different plants that share a common name. A quick confirmation of the botanical name can help you avoid a surprise plant in your garden.

A final visual aid on the front of each packet is an illustration, whether a drawing or a photograph, of what the mature plant, flower or vegetable looks like. Many of these are beautiful enough to be framed. Once you’ve found what you want to grow, look a little closer and you’ll discover there’s a lot more you can learn from reading the fine print on the packet.

The type of plant

Knowing whether your plant is an annual, only lasting for one growing season; a biennial, with a two-year growing season; a perennial, coming back year after year; or a vine can make a big difference as to where you want to grow each plant.

Not all vegetable seed packets indicate that they’re vegetables, as most people will recognize the common name as such. You might find that some plants that straddle categories, such as lavender, which is an herb, will also be labeled as a perennial.

Although some descriptions may be a bit over the top, they can also give you an idea of the size, color, growth pattern, aroma, productivity and other specifics of this particular variety.

How many seeds are in each packet

You’ll usually find either the number of seeds within or the weight by grams. The latter designation is used when the seeds are tiny and not planted individually. This will help you figure out how many seed packets you may want. If you only want a few squash plants, then one packet is probably enough. If you want to plant several rows of radishes or carrots, you may need two or more packets of each.

How much light the plants will need

Another bit of information to pay attention to is the sun needs for each plant, from full sun to shade. Your seedlings won’t do well if they’re getting too much or too little sun.

The size or growth pattern of the plants

Whether it’s the height of a black-eyed Susan vine, the spread of a mature lavender or the expected size of a pumpkin, you’ll usually find an indication of just how much room each plant will take up in your garden.

The bloom time or days to harvest

This lets you know when to expect the plant to be at its peak. For vegetable gardeners, especially those in cold-winter areas, this information tells you whether you have a long enough growing season to be successful. If it looks questionable, check to see if you can start seeds indoors (see below).

In a very small amount of space, seed companies provide an easy-to-read primer on successfully growing your desired plants from seed. The information on the packets almost always includes the following:

While not as common as the planting information, many packets also include fairly detailed information on when to thin plants and even information on general garden care such as weeding, watering schedules, basic pruning times and when and how to harvest vegetables.

Other notes. Depending on the type of seed, you also might find information on watering needs, suitability for containers, whether the seeds are heirlooms or hybrids, whether they conform to organic guidelines and, for vegetables, confirmation that they’re non-GMO (genetically modified organisms).

Some seed packets even provide advice on the best ways to use the particular plants, which could be anything from naturalizing them in a woodland garden area to planting them as part of a cutting garden. Vegetable seed packets often contain cooking and preserving suggestions.

With all this information, it seems a shame to simply toss the packets once you’ve planted the seeds. While it is charming to use them as plant markers or row markers, sun and water can quickly cause the printing to fade. Instead, bundle them with any other information you have about your garden for each year and keep it all where you can easily access the information as you need it.