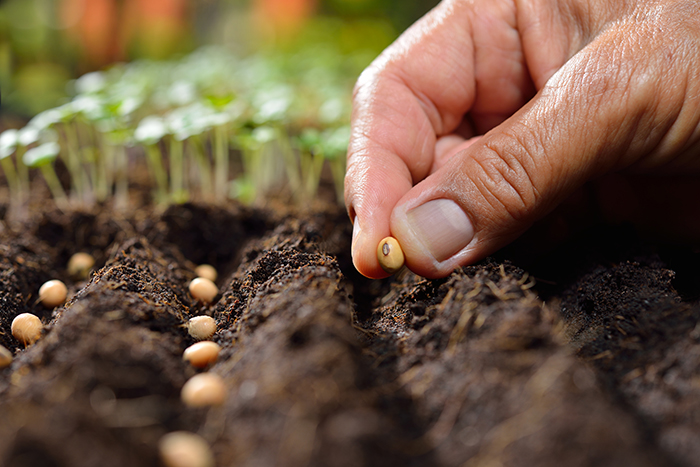 Just like many babies in nature, seedlings are vulnerable to predators and need constant vigilance.

Spring garden plans are very similar to most of the other plans in my life. Too grand. Too complicated. Too far beyond my current skill set. That whole Henry Ford ‘what would you do if you knew you couldn’t fail’ syndrome. But Thomas Edison is more my speed: ‘I didn’t fail. I just found 1,000 ways that didn’t work.’

Last year’s garden would be called successful by some (namely those who LOVE tomatoes, like the rest of my family), but was considered a failure by me (I HATE tomatoes).

We started our seeds on a cold snowy day in February. We continued to plant successively through the next month, depending on the seed. They were lovely little seedlings. Cauliflower, broccoli, Brussels sprouts, peppers, marigolds, cucumbers, eggplant, basil, thyme, oregano, parsley, rosemary, lavender and a dozen different types of cottage flower. And tomatoes. Paste tomatoes, beefsteak tomatoes, and cherry tomatoes.

I tended them like the tiny baby balls of potential that they were. Monitoring moisture, turning them twice a day so they could grow evenly as they reached for the sunlight, giving them a breeze so their stems would grow strong, slowly adjusting them to the warmth of the direct sun. I could taste that freshly picked broccoli right out of the garden. I could see my barefoot little gremlin children picking cherry tomatoes right off the vine and popping them into their mouths with bursts of summer dripping down their chins. I could smell the fresh herbs sprinkled into my salads and sachets in my linen closet. Sigh. It was such a lovely dream.

But just like many babies in nature, seedlings are vulnerable to predators and need constant vigilance. The first tragic loss was on a glorious, sunny late-April morning. I had moved my sweet darlings out into the early sun. I cooed and tickled their chins and then went into the house to make a pot of tea.

On another morning, I had seen the beady eyes of the vicious predator assessing their tender flesh and calculating his opportunities to get them into his belly. As I walked back into the room and looked out the patio doors, it struck me. I can’t describe the carnage as I know that my other tenderhearted gardener friends would be disturbed, but let’s just say that the sight of Archibald the rooster with three of his hens up on the seedling table is something that still haunts my spring nights. The death toll included every last herb seedling and half of the flowers. The brassicas, my absolute favorites, persevered. As did all of the tomatoes, which would prove to be the most tenacious of survivors.

I worked last spring’s days tending the hugelkultur beds that would be my darlings’ home. Hugelkultur is a type of permaculture that involves layering rotting wood with compost and manure, two things that I have in abundance. Because my garden spot is far from a water source, I was looking for a naturally water-conserving system. Hugelkultur is exactly that. The rotting wood becomes a sponge that holds moisture in the soil and gives back nutrients as it breaks down. I added a layer of waste wool, which also holds water as it breaks down and has the added benefit of adding poopy, fertilizing goodness to the soil. Then I topped it with composting ruminant manure from the winter barn, saturating each layer as I went. Sheep, goat and alpaca manure is an amazing fertilizer and can be put on the garden fresh without having to let it compost first, the way you do with chicken manure. Plus, it doesn’t have as strong an odor as horse and cow manure. When everything was ready and the days and nights became warm enough for the surviving darlings, I brought them out to their new warm beds. They loved it! They grew strong and robust.

Then, I went on vacation.

While we were on vacation, a fox took about half my poultry flock and cabbage worms decimated my beloved brassicas. The despicable tomatoes (and Archibald) remained untouched. Most of the little darlings were beyond saving, but a few were hanging on: three cauliflowers, two broccolis and four Brussels sprouts.

My fellow shepherds in Ireland said they used their waste wool as mulch for their gardens because the lanolin in the wool drove away cabbage worms and slugs. I had a fresh bag of waste wool from the spring shearing, so I made cozy little wool blankets around the darlings and sure enough, the buggers were driven off. As the late spring days got longer and warmer, my brassicas recovered. They thrived in their orderly, well-tended, poopy home. The repugnant tomatoes lost their minds without my intervention and tumbled all over each other in a chaotic tangle of vines and bright yellow flowers. Then I excitedly discovered three volunteer potato plants in my compost bin! I love potatoes, so I hilled some of the compost around each little plant.

Three weeks later the third predator revealed himself. He was a threat that I hadn’t planned for, even as he plotted. I had just donned my hat, pulled on my gloves and headed out to garden. I screamed as I discovered Flynn, my young ram, standing in the middle of my beloved brassica bed. He had broken out of his nearby pasture and knocked a hole in the garden fence, and was happily gobbling up my last cauliflower plant. All that survived were two Brussels sprout plants and every last abhorrent tomato plant. How those bright red and orange fruits didn’t entice him, I don’t know—but clearly, Flynn has a discerning palate.

As I tearfully carried the few broken broccoli plants that were uneaten out to the compost heap, one last garden betrayal awaited me. There on my happily hilled volunteer potato plants were bunches of bright yellow flowers. Curses! More insurgent tomatoes, not delicious potatoes after all.

Needless to say, this year’s seedlings do not contain a single tomato plant.

*Musings from the Farm is published in Edible Western NY. It follows former city dweller Kate Hagel and her family as they dive into a new farm-folly life on Ballyhope Farm in the beautiful rolling hills of Western New York.