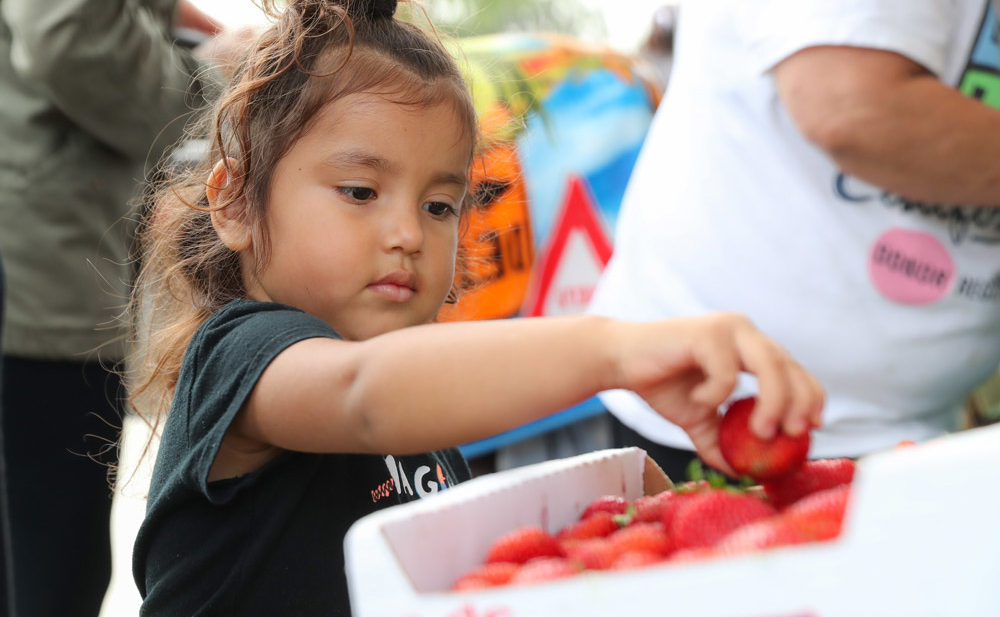 You are here: Home / EDIBLE STORIES / Rethinking Hunger: Why Feeding Those in Need Must Focus on Nutrition

Most North Americans are technically “food secure”, having access to enough calories to avoid hunger thanks to government programs, food banks and hunger relief organizations. But the fight against hunger demands more. It’s time to shift our focus to “nutrition security”—so all people have access to the kind of diet that promotes good health and prevents disease.

When anyone in a community struggles with food insecurity, it’s everybody’s problem.

In the United States alone, an estimated $90 billion in excess healthcare costs annually are associated with food insecurity, according to research from the Sodexo Stop Hunger Foundation’s study conducted by researchers affiliated with Harvard’s School of Public Health, Brandeis University and Loyola University.

The social and emotional toll hunger takes on communities is harder to quantify, but no less deeply felt.

But of course, for those personally experiencing food insecurity, the problems are impossible to ignore.

For those receiving SNAP (Supplemental Nutrition Assistance Program) benefits, getting the most calories for their dollar is likely at the forefront of their mind, and sometimes that means families eat more processed foods than they’d like.

Michel Nischan, a four-time James Beard Award-winning chef and sustainable food movement leader, is working to change that. And for Wholesome Wave, the nonprofit he founded in 2007, it is a primary goal.

From Food Security to Nutrition Security

Wholesome Wave recently reset its priorities, in fact, and will now squarely focus on nutrition—not food—insecurity. The goal is to change the way people think about hunger.

The distinction between food security and nutrition security is a critical one, according to Nischan.

Most North Americans have access to enough calories to avoid hunger thanks to government programs, food banks and hunger relief organizations.

“This makes them technically ‘food secure,’ but they’re still not getting the nutrition they need to be healthy,” says Nischan. “We aren’t solving the real problem.”

“It’s about people having the kind of diet that promotes good health and prevents disease,” he says.

Communities of color and those living in poverty in the U.S. got sick from COVID-19 at a rate two to three times higher than the rest of the country according to the 2020 Wholesome Wave impact report.

The underlying reasons why aren’t specific to the pandemic.

“Four of the Top 5 drivers of this disparity are obesity, diabetes, hypertension and heart disease,” says Nishan. These are all chronic conditions that can be prevented and often reversed by increasing access to nutritious food.

Yet, when the foremost experts in hunger talk about hunger in terms of food security, it drives a cultural conversation that leads food banks to be well-stocked, but often it’s with ultra-processed food.

“It has to be about more than getting meals on the table,” Nischan says.

To that end, Nischan and Wholesome Wave co-founder Gus Schumacher worked on a SNAP “doubling” program that makes every $1 a participant spends worth $2 when they buy produce.

What began as a nascent pilot program in Columbia, Md., in 2005 has since grown into a federally funded program started by Wholesome Wave that helps more than 40 million people eat more greens and less instant ramen.

Need a More Nutrient-Dense Diet? There’s a Prescription for That.

As part of Nischan’s shift to nutrition security, Wholesome Wave is also ramping up its Produce Prescription Program.

It’s an umbrella program that partners with local organizations, such as hospitals and health clinics, to empower doctors to write prescriptions for nutrient-dense fruits and vegetables, often local, that patients pick up weekly, free of charge.

Your insurance company will pay for a kidney transplant, but not the vegetables that can prevent the disease.”

“Many people visit the doctor and hear, ‘If you don’t eat better, the next time I see you you’ll have type 2 diabetes,” says Nischan.

His next big goal is securing Medicaid and Medicare funding for these programs so they become as common as prescriptions are for drugs. “Your insurance company will pay for a kidney transplant, but not the vegetables that can prevent the disease,” he says.

Piloted in 2010, the Produce Prescription Program is ambitious, but peer-reviewed research shows that it works.

This is not to say that Nischan believes Wholesome Wave has all the answers.

From the beginning, Wholesome Wave has partnered with local organizations to bring ideas and funding to a collaboration that fits the specific needs of its community.

“We don’t want to be the organization that rides into your town with our solution to your problem. Addressing nutrition insecurity is different in every community,” he says.

And, as we know, paying attention to those differences is critical to finding solutions.

Hunger by the Numbers

The problem of food and nutrition insecurity across North America is incalculable, but these sobering statistics show that work still needs to be done to ensure everyone gets the nourishment they need to live a full life and prevent disease.

In the United States:

Native Foods for Healthy Communities and The Power of One

Indigenous communities live with some of the highest rates of food and nutrition insecurity in North America.

A study published in 2017 in the Journal of Hunger & Environmental Nutrition found that from 2000 to 2010, 25% of American Indians and Alaska Natives were consistently food insecure.

Dr. Lois Ellen Frank is a Santa Fe, New Mexico-based chef and native food historian. She believes that the health and nutrition security of Indigenous communities—and all communities for that matter—can best be served by putting attention and energy into solutions and not focusing on the problems.

Frank would rather focus on concrete tasks she can do to help.

“I’m a big advocate of the power of one person,” she says.

She provides culinary training to those who cook in community centers and schools to help people reconnect with traditional foodways through native plants and recipes.

Recently, she taught cooks in one school to make refried bean enchiladas with corn and zucchini in a red chili sauce.

“These are ancestral foods that promote wellness,” she says.

After the training, 32 families received the prepared dish, plus the recipe and the ingredients they’d need to make it themselves.

“You think you aren’t teaching that many people, but it’s a ripple effect,” she says. One family passes the information to another.

This passing of knowledge from one person to the next can help keep food traditions alive. “It takes only one generation for a recipe or a method of agriculture to disappear.”

And preserving these recipes and traditions matters when it comes to solving the problem of food and nutrition insecurity.

A 2019 study published in the journal Food Security suggests that tribal communities can achieve increased food security and better health outcomes if they have greater access to their traditional foods and the ability to hunt, fish and preserve native foods.

For some, starting a nonprofit organization is a great way to make a difference but Dr. Frank also reminds us that helping just one person can have an impact.

A Note from Tracey Ryder, Founder of Edible Communities:

Here we bring you the second in a series of thought leadership stories that span topics of sustainability, access to healthy foods and nutrition, restaurant revitalization and regenerative agriculture.

These are the values that Edible Communities, as an organization, has been devoted to for the past two decades. Our work lends itself to the singular notion that excellent storytelling has the power to change lives, and that by exploring and elevating important conversations like these, we can effect everlasting change in our communities too.

Please join us in supporting the work of our featured subjects—Michel Nischan, sustainable food advocate and co-founder of Wholesome Wave; and native food historian and chef, Dr. Lois Ellen Frank—two heroes from our local communities who are tireless champions in the battle against nutrition insecurity and hunger.

As Dr. Frank says: “The power of one can be huge,” and we could not agree more.

One person, one organization, one community—each purpose driven, can massively impact our food system.

We believe that every person should have access to a high-quality diet that is filled with nutritious foods that are raised and grown using sustainable practices.

As consumer advocates we all play a critical role in reshaping the demand for this, and we all must be diligent in advancing this agenda if we are to ensure that no one is left behind.