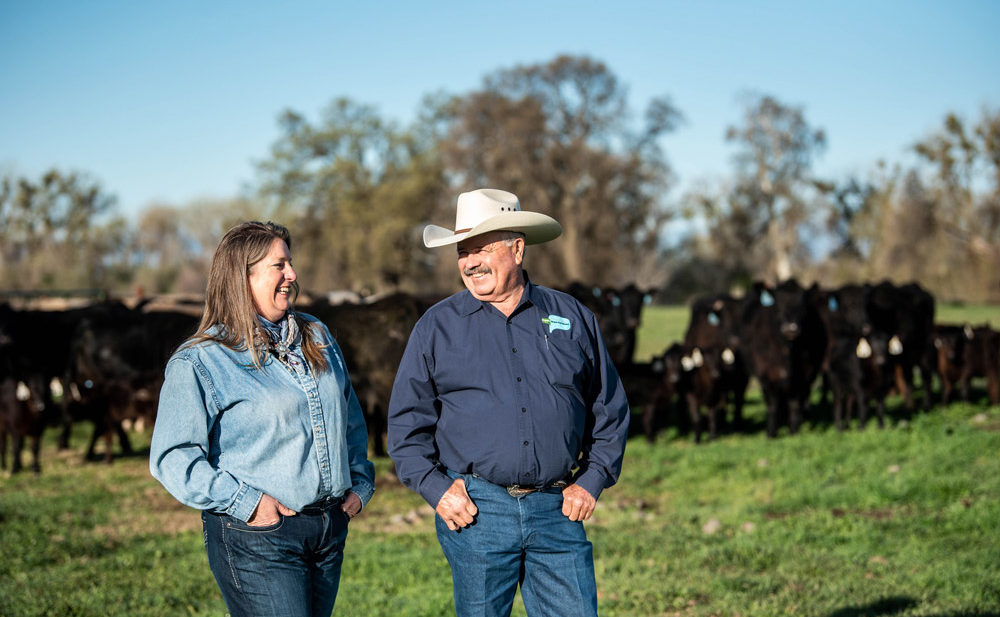 You are here: Home / EDIBLE STORIES / The Birds and the…Beef? How Regenerative Grasslands Restore Habitat for Birds

A new partnership between Panorama Organic and the National Audubon Society adds 1 million acres of regenerative grasslands for the preservation of birds while producing sustainable, grass-fed beef.

Photo (above) by Candice Vivien

You’ve seen the headlines: Beef is destroying the planet. You’ve heard all about the greenhouse gases and pollution a typical beef operation produces.

But the idea that beef is an environmental disaster isn’t quite that simple.

Those dire warnings are based on one kind of beef: The conventional, factory-farmed kind. And it is, by far, the most commonly consumed beef in North America. In fact, 97% of the beef in the US food supply is grain-fed, feedlot beef.

But there’s another way to produce beef, a way that actually enriches the environment. And it’s happening across at least 3.5 million acres of American grassland.

Kay Cornelius, a fourth-generation rancher and new general manager at Panorama Meats, intends to add another million acres to that total by 2030 through a groundbreaking new partnership with an unlikely ally: The National Audubon Society.

“All of our data proves that grassland birds are the most imperiled group of bird species in America. Grassland birds have lost 53% of their population since 1970, and 95% of all grassland birds live on cattle ranches,” says Marshall Johnson, vice-president of Audubon’s conservation ranching initiative.

The nonprofit’s “Grazed on Audubon Certified Bird-friendly Land” seal was established to recognize ranches that are managed in a way that protects those birds.

Saving these birds is a vital part of maintaining biodiversity. Like bees, birds are important pollinators, and they help maintain the delicate balance of a grassland ecosystem.

Through Audubon’s new partnership with Panorama, every ranch in Panorama’s network will earn that Grazed on Audubon Certified Bird-friendly Land seal. “We began the project of introducing this certification in 2013, and we enrolled our first ranch in 2017,” says Johnson.

Joining forces with Panorama now means adding 1 million acres of land to the 2.5 million acres that have already been certified as bird-friendly. “It means a lot to partner with an organization that has built its brand in alignment with our core values,” says Johnson.

Darrell Wood, founding Panorama rancher, was the first in the network to get certified. “I volunteered. I wanted to see how it went and what the level of difficulty would be for ranchers,” he says. And he discovered the benefits greatly outweighed any extra effort. In large part, the certification is an acknowledgement of what Panorama ranches, all of which were already organic, have been doing for years.

As part of the program, each ranch gets an annual visit from a rangeland biologist who takes soil samples, measures the vegetation, and assesses how the ranch affects bird life.

Then Audubon creates a habitat management plan for the rancher with suggestions for improvements. “The ranches enrolled are going to become even more bird friendly, but they were already doing great things,” says Johnson.

Before taking the helm of Panorama Meats as general manager last September, she doubled sales in her role as vice president for the biggest and best-known name in humanely raised meats, Niman Ranch. “I spent 12 years there working for farmers, and in my new job I’m still helping farmers earn a living,” she says.

Finding ways to grow and protect a rancher’s livelihood is a high priority for Cornelius personally and central to Panorama Meats’ mission. “I grew up in a rural community during the farm crisis years. My mom and dad really struggled,” she says.

The experience of watching her once-thriving farming community dry up back then informs everything she does today. “At Niman Ranch, we really celebrated the family farmer doing the right thing and we’re doing the same thing at Panorama.”

The simplest way to keep these family farms in business is to ensure they are able to get their product to market and to be paid a fair price.

Being part of Panorama’s network helps them accomplish these goals, and the Audubon’s bird-friendly seal provides a major boost, a way to make these special packages of meat stand out from everything else in the butcher’s case for environmental conscious consumers.

The Connection Between Beef, Birds, Grassland and Climate Change

To understand how a properly managed ranch can actually help remove carbon from the atmosphere, you have to understand the long history of North America’s grassland.

Before they were hunted nearly to extinction in the late 19th century, wild bison grazed an area just the right amount to promote the growth of a complex and robust root system without killing the plants.

Domestic cows, if left to their own devices, will eat the grass down to the bare earth, destroying the grassland. To make them more like their ancestors, ranchers must use rotational grazing, moving them from spot to spot to achieve that ideal level of grazing.

“Cattle can mimic what historic bison used to do. That’s why we need them,” says Johnson.

Without animals grazing, grassland becomes overwhelmed with weeds and invasive plant species. The soil quality is degraded, and animal life, birds and pollinators like bees lose their habitat. Vernal pools dry up and disappear. Without well-managed grassland, some species can even become extinct. “There’s a vernal pool on my ranch that hosts an endangered species called fairy shrimp,” says Wood. “I have a stream that goes through my property that’s one of the major salmon spawning streams in California.”

And then there’s the matter of carbon. It’s true that cows emit carbon into the atmosphere, about 80 tons annually for a ranch of 150 acres, according to the Texas Department of Agriculture. There’s also a certain amount of carbon emissions associated with the farm equipment (32 tons).

But well-managed grassland, with its deep root systems, lush vegetation, and rich soil, is actually able to remove 500 tons of carbon from the atmosphere per year, giving it an overall positive effect on the environment rather than a negative one. It should be noted that this only applies to cattle ranches with high standards for land management and environmental stewardship—not conventional factory farms.

Raising beef cattle on pasture this way does take longer: Cows don’t fatten up as quickly without the grains provided by feedlots, and they expend more energy grazing than on a feedlot. It also requires more space.

As a result, a rancher practicing this kind of regenerative agriculture cannot produce the same volume of beef on the same acreage as a factory farm. Their beef must therefore be sold at a premium.

The preservation of this land is important to everyone, but these eco-minded ranchers can only protect the grassland, the birds, and the whole ecosystem it supports if they can earn a living doing it.

That’s where you come in.

Pay More to Do More

The way Kay Cornelius sees it, people are looking for three things when they’re shopping for grass-fed beef.

The Grazed on Audubon Certified Bird-friendly Land seal requires third-party certification. Audubon is one of the most trusted names in conservation. This means, in an era of spurious label claims, the Audubon seal stands out as meaningful.

According to Johnson, since the first ranches were enrolled in the program in 2016, bird abundance has increased on those grasslands by 36%. This is a good indication that other species, especially bees and other pollinators necessary for the food supply, are flourishing as well.

“Consumers buy grass-fed beef to vote for a change in the environment. Paying a little more for beef is a nudge in the right direction,” says Cornelius.

It’s a small price to pay for doing your part to preserve America’s grassland and the birds that call it home.

How to Shop for Sustainable Beef

Listen to the first episode of our Eat, Drink, Think podcast for our interviews with Kay Cornelius, Marshall Johnson and Marilyn Noble

A Note from Our Founder, Tracey Ryder:

How we inhabit this planet and envision its future is more critical now than at any time in our history. This past year has certainly taught us that—it has exposed our vulnerabilities, our frail insignificance in the scheme of things. Yet during this turbulent and challenging time we have also found hope.

This is the first in a series of thought leadership stories that span topics on sustainability, hunger, restaurant revitalization and regenerative agriculture. These are the values that Edible Communities, as an organization, has been devoted to for the past two decades. Our work lends itself to the singular notion that excellent storytelling has the power to change lives; and that by exploring and elevating important conversations like these, we can create massive change.

We also know that change is impossible without the support of our readers—consumers who have the power to reshape the world we live in. Every farmer, rancher, entrepreneur and organization we champion is better off because of you. You read, learn, take action and vote with your forks. It will be you who ultimately tilts the scale toward a more sustainable future, a more sustainable food system.

Thank you for joining us as we collectively set our sights on creating a future that is nothing less than extraordinary. One that binds the ecosystems of our lives to Mother Nature without a disconnect between what is on our plates and where it comes from—where all of the seemingly smaller choices we make today add up to massive, beautiful and everlasting impact.