You are here: Home / EDIBLE STORIES / The Garlic Papers: The Consolation of the Timeless 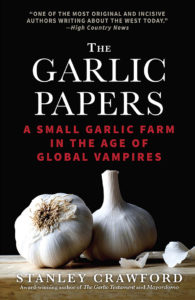 There is something bipolar about the legal machinations in distant capitals in contrast to the realities on the ground, in the earth, in the soil, of my small farm, which is where I live and where I have invested so much of my life.

Above all, it is quiet on the farm. I take the quiet for granted. After a day in the city, I crave the quiet. Sitting outside on the lawn on a warm winter afternoon, I can hear the faint sound of a car or truck passing on the highway a half mile to the south, through the leafless cottonwood trees lining the river. But the air is more likely to be dominated by the chirping of birds around the feeder hanging in front of the living room: sparrows of several kinds, juncos, chickadees, towhees, house finches, the occasional nuthatch and ring-neck dove—and rare squawking blue jays and stellar jays. There will be the caw of a raven, the yapping of a magpie, the dawn and dusk yodeling of coyotes, the bark of a distant dog, and now and then the hum of the milling machine at the cabinet maker’s workshop two doors down, the occasional whine of a chainsaw in winter, a Weedwacker in summer. Then, when the human sounds are suspended for a few minutes, there rises from the river a faint wash of sound filtered through the bare branches of willows and cottonwoods, the native white noise of the valley. In the fall, in quiet afternoon moments, the plaintive honking of sandhill cranes sprinkles down from a thousand feet up. Gone for the past decade or so are the sounds of cattle, horses, goats, and sheep, at least in my neighborhood, though now and then my roosterless hens will kick up a squawking fuss among themselves.

Absent is the fossil fuel driven thrum of traffic, often audible, even in quiet urban residential neighborhoods, at all hours. But cities are more than just noisy. They are vast three-dimensional instruction manuals. Upon entering, you are directed to Stop, Go, Wait, Walk, Don’t Walk, go One Way, not another, Park here, No Parking there, No Loitering, No Smoking, No Waiting, No Texting, No Left Turn, No Right Turn on Red, No Littering, Trash, Recycle, Speed Hump, Slippery When Wet. Signs will direct you where to buy and to sell, where and how to be educated and trained and entertained, where to seek administrative and legal and political assistance, who to vote for, where to find the police, the fire department, and medical help and counseling, where and how to find companionship and sporting venues, where to eat and drink, where to rest, sleep, and where the bodies of the deceased are accepted.

A large city’s menu can be overwhelming. And oppressive, as encoded in ever-present advertisements, and in the implied competitive pressures. Upon returning from the city to the village and then down our quiet lane to the farm, I can feel a sense of relief from the urban pressures. Relatively speaking, I live in the middle of nowhere, a rocky slope spotted with stunted juniper and piñon immediately above the house to the north, mirrored a half mile to the south by another such with a blackened slash from a fire set off by a lightning strike several years ago. These slopes, these rocks, these trees, the river, they speak of nothing to the human condition. They do not instruct. They are indifferent to anything and everything I do. They will be here long after I am gone, long after we are all gone, in some form or other, certainly the rocks and boulders, probably not the trees, maybe not even the river. It’s hard to think of them as witnesses, except as internalized presences. Yet their indifference can offer a sense of freedom from urban expectations and pressures. Their presence can say: do what you want, invent what you want, create everything from nothing. Start afresh. There are no limits, no boundaries. There is no obstacle to inventing yourself or reinventing yourself.

This can be the relief, the consolation of the rural, as long as you  can accept the embracing indifference and see  it as a positive backdrop, not as the Void, as long as you can appreciate the freedom of being in the “middle of nowhere.”

Reprinted with permission from The Garlic Papers: A Small Garlic Farm in the Age of Global Vampires by Stanley Crawford