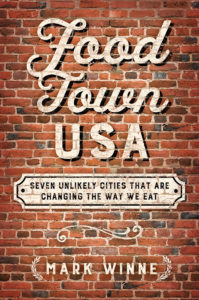 One of the feistiest Jacksonville people I met is Chef Amadeus, an African American culinary wizard who packs more punch in a five-foot- four-inch frame than most people a foot taller. I met him at a focus group in Jacksonville that was organized by Laureen Husband, a county program director for the Florida Department of Health. He told the group that he grew up in Jacksonville, was a private chef, had a specialty spice business, and had been a part of the Seattle food scene, where he said, “food is a religion!” Like others, he shared his concerns about what has been lost: “Everybody used to cook and garden, now they don’t. . . . I see kids buying Gatorade—okay, not the worst thing—but they don’t know you’re supposed to use up calories before you add more.” Mike Swain, a Florida Cooperative Extension agent, agreed with the Chef, “Too many people don’t know that a salad is good for you. I’ve been to too many food pantries that have no fresh produce.”

While Chef Amadeus expressed the same disapprobation that everyone did for today’s American diet, he reserved a special vitriol for the injustice visited upon the Northside. “It’s a ‘food swamp,’” he says without suppressing any passion. “There’s a fast-food place on every corner, and the healthiest food available is at Subway. The Northside also has the highest rates of illiteracy, crime, and diabetes.”

The Chef brought up another injustice that surprised the group. I asked everyone to name their favorite eateries, especially those where they might take out-of-town guests. Their restaurants were largely from the same top-tier lists that by now were becoming familiar to me. None of them, however, were in the Northside. Chef Amadeus pointed out that when local media’s white restaurant critics do their reviews and pub- lish their “top ten” lists, they always refer to anything in the Northside as a “hole-in-the-wall.” As best as he could discern, these writers had never been to the neighborhood or the restaurants they were writing about.

What ensued was a lively discussion about “hole-in-the-wall” food joints, which led to a spontaneous tutorial from Chef Amadeus. He promptly ticked off a dozen or so names—heavy on barbecue and soul food—that were known to many of group’s black members, but few of its white members. Some, he noted, were better than others, but all had historic and cultural roots that anchored the place to the people and the people to the place; in short, they were integral to the community’s identity. By the time he was done, everyone was eager to sign up for the Chef Amadeus Magical Mystery Hole-in-the-Wall Tour. And for reasons that were left deliberately vague, the Chef implied that white people would have a more satisfactory experience if they were accompanied by a person of color.

“I grew up in this neighborhood and came to Holley’s to get curly fries during school lunch break.” Six months after the focus group, I’m standing on a cracked sidewalk with Chef Amadeus as the first “volunteer” for the hole-in-the-wall tour. He’s telling me about the nondescript cinder block building across the street from where we’re standing. Holley’s bar-b-q  the sign says at a busy intersection on Moncrief Avenue, a major thoroughfare that runs east-west through the Northside. The surrounding streets are potholed, curbless, and the neighborhood’s mostly single-family homes are in disrepair with piles of accumulated flotsam and jetsam scattered about their yards. As one Yelp review of Holley’s said, “The food must be good for so many people to risk their lives to come here.” The reviewer still gave it five stars.

When the Chef said, “This is a food desert, but there’s always an oasis in the desert,” I was skeptical, thinking he was seeing a mirage. The mounting anticipation and scent of barbecue, however, had whetted my appetite, so we sauntered up to the metal-grated order here window. I tried the door to get inside, but it was locked. Asking Amadeus where we sit down to eat, he just laughed. “In your car!” No tables, no benches; it’s all takeout. The small tarmac apron surrounding the building has live music on Tuesdays and Thursdays. The menu consisted of various combinations and quantities of ribs, chicken, oxtails, and curly fries. I ordered the smallest portion available—three ribs, curly fries, and an orange soda (no alcohol is served at Holley’s)—only to take half of it home in a sodden clamshell container.

Before we could make our way to my car to dig in, a large black Escalade pulled up, driven by Wendy, Holley’s proprietress. Of course, Chef Amadeus knew her well, and during my time with him, I discovered that everyone in the Northside knows the Chef. I asked her if it’s true that this is where curly fries were invented. “My dad’s brother, Leroy, made the machine that curled the fries,” she said. The Chef wanted to know if she still had it. “I could dig it up. My dad could have had a patent on it, but he couldn’t read nor write, so he got bamboozled.” Wanting to get Wendy to talk a little more about her business, he prodded her with, “When they write a food blog, they never write about this part of town.” “You know why!” Wendy responded in the eye-rolling way some black folks have of saying “racism!” without actually saying it. “I get my recognition from the stars who perform in Jacksonville—the musicians, rappers, comedians. After the show, what food do they want? Not that fancy stuff downtown. They want mine!” After I eat Holley’s ribs—meaty, tender, covered in a sauce you’d crawl for—I can honestly say I want her food, too, but probably just once a year.

“What black culture and food are all about is that everyone comes to a place where everybody knows everybody.” Thus spoke Amadeus, though I also hear the Cheers theme song playing in my head. As I walk into Celestia’s Coastal Cuisine, an African American seafood restaurant several miles from Holley’s but still in the sprawling Northside, I can’t imagine a team of academic sociologists saying it any better than Amadeus. The place is hopping, a buxom lady blues singer is killing one heartbreak ballad after another, and Varon Mobley and his wife, the restaurant’s namesake, Celestia, are cooking and serving shrimp, crab, and oxtail dumplings to a laughing crowd of fifty or more. It takes me about three seconds to realize I’m the only white person in the place, but I feel un-self-conscious,  even loved, and like, well, everyone knows my name.

While Holley’s is rough-and-tumble—located in  a part of town where, I’m told, “when you hit a red light, mister, you don’t stop!”— Celestia’s neighborhood is decidedly middle-class—formerly rural and white, now 80 percent black and mostly suburban. And as I was to learn from Celestia herself, it’s far more sacred than secular. Her culinary roots are long and deep in Jacksonville, including culinary training at Florida State College in Jacksonville, and a long stint at Soul Food Bistro, a local institution associated with the Potter’s House Christian Fellowship. The Soul Food Bistro has brought African American cuisine to both the east and west sides of Jacksonville, making it a cultural bridge of sorts. But most important, it infuses its menus and staff with an open, heartfelt, and nonjudgmental Christian spirit.

“We opened Celestia’s eighteen months ago, after consultation and prayers with our pastor,” Celestia tells me. As such, this restaurant is “an old, new place”—an extension of her faith and the Potter’s House church. When I ask why she chose food as a career and as a way to express her faith, she says, “I love to make people happy; I associate crabs and good food with family and being together.” When I ask for a favorite line of Scripture, she doesn’t pause: “All things work together for the good to those who love God.”

On my better days, I would also consider myself a believer, but I still want to find proof in the food and the chatter. Celestia honored me with a heaping platter of whole crabs and shrimp, which after not finishing my “child size” portion of ribs at Holley’s, put me to the test. After seeing me struggle with cracking open the crab shells, a nice lady by the name of Nikki Nixon offered to help. She was dressed to the nines— bejeweled and hair styled for a night on the town—but that didn’t stop her from grabbing the sides of each of my three crabs with her perfectly manicured hands and breaking them cleanly in half, revealing a treasure trove of meat. We both had a good laugh!

Mark Winne has held leadership positions with several nonprofit food organizations and food policy councils. He currently serves as a Senior Advisor to the Johns Hopkins Center for a Livable Future and writes, trains, and speaks about the food system. He is the author of Closing the Food Gap, Food Rebels, and Stand Together or Starve Alone.